My Plan To Profit From Elon Musk’s Latest Big Project…

Most of us know that the internet has been one of the largest forces of wealth creation in human history.

To understand this, you only need to look at the 10 largest publicly traded companies on the market. Half of them come courtesy of the internet in one way or another: Amazon (Nasdaq: AMZN), Alphabet (Nasdaq: GOOGL) Facebook (Nasdaq: FB), Alibaba (NYSE: BABA) and Tencent (TCEHY).

Combined, these companies produce annual revenues north of $832 billion. That’s 2.5x more than the GDP of Ireland. The combined value of their shares is an astounding $5.5 trillion, which would make it the third largest country in the world in terms of GDP, just behind the United States and China.

These businesses wouldn’t even exist today if it weren’t for the internet. But as prominent as the internet has become, would you believe this… There are still billions of people who don’t have access to it.

Bringing The Internet To The Masses

According to a report by the International Telecommunication Union, a division of the United Nations, even though internet usage has skyrocketed over the last decade and spread to nearly every corner of the globe, there are still more than 3.4 billion people without internet access.

In fact, in the United States alone there are more than 14 million people who don’t have direct access to high-speed internet. And that is in a country with one of the largest internet markets worldwide. Most of these people can be found in rural, remote areas. But the need for high-speed internet is still there…

One of the biggest hurdles in worldwide internet accessibility is infrastructure. In the fledgling days of the modern internet — the early AOL days — internet connections had to be made via landlines, commonly known as dial-up. This is where a modem (another unfamiliar phenomenon to most folks at the time) “called” an internet service provider in order to connect. A major shortcoming was that you couldn’t use your telephone and connect to the internet at the same time.

Dial-up utilized the infrastructure that was already in place, telephone lines. Of course, today, few people use dial-up because of how slow it is (you wouldn’t be able to quickly browse complex web pages or stream Netflix on a dial-up connection). Dial-up was largely replaced with digital subscriber line (DSL), which still utilized a phone line but was up to 100 times faster than dial-up. Plus, with DSL, a web surfer could talk on his land-line phone and connect to the internet at the same time.

But as with 3.5-inch floppy disks and CDs, dial-up and DSL are largely a thing of the past. Geographic locations that don’t have access to the internet aren’t going to spend the fortunes it would require to build out a dated system to connect to the internet… not when we can utilize new technology that’s not only superior but becoming cheaper to build.

The Next Generation Of The Internet

Enter: Elon Musk and his Starlink program, a division of SpaceX…

The Starlink program aims to solve the problem of millions of folks without access to internet. We already know that this is a massive total addressable market, or “TAM,” which means big profits can be gleaned from the frontrunner in the space.

And they’ll do this by using their expertise gained from their success at SpaceX – in the form of satellites.

Now, satellite internet has been around for a while. But up until recently, it has been slow, unreliable, and prohibitively expensive.

But Starlink has the solution to this problem: with low-earth-orbit (LEO) satellites. This graphic from the research team at Ark Invest explains how it works: 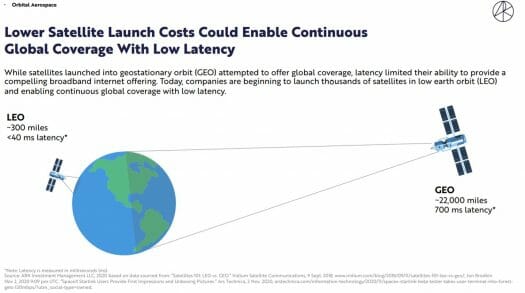 I’ll spare you the technical details for now. But here’s what Starlink can deliver… Speeds up to a whopping 200 times faster than traditional internet… beamed to you at all times — no matter where you are… and for only a fraction of the cost you may be paying now…

The implications are truly remarkable. And it’s only a matter of time before Starlink makes its way to your state.

Of course, we can’t invest directly in Starlink. It’s certainly possible that this could be spun off into its own company someday. But even so, its IPO is likely still years away. But there is a way we can get in on this market before a single share of Starlink ever trades hands…

You see, I’ve discovered a small company that’s absolutely crucial to Starlink’s success. To put it simply, without their tech, Elon Musk’s dream of delivering high-speed internet to the globe will never get off the ground…

I’ll have much more to say on this (and the bigger theme of the commercialization of space) in the weeks to come. To put it simply, I think it’s one of the biggest opportunities we’re likely to see in our lifetime… and it’s easy to see why this company could easily make a killing for early investors.

If you’d like to learn more, check out my brand-new research report now.