Companies Are Cash-Rich And Hunting For Deals. Here’s How To Profit…

Earlier this week, I took a few days off to pack all my belongings into a U-Haul and carry them 300 miles away to our new home.

And just like that, the market stages one of its sharpest short-term rallies in years.

I should do this more often – except for the moving part.

Of course, I’ve been actively following economic developments while out of the office. And it’s pretty clear that stock traders and bondholders aren’t seeing eye to eye.

The yield curve briefly inverted in late trading yesterday, an aberrant condition that often foreshadows recession. Media pundits love to point out such things. In this case, they are referring to the relationship between the 2-year and 10-year Treasury bonds. But what they often fail to mention is that it can be over a year before the storm hits. And in the intervening months, equities can perform quite well.

That has indeed been the case, with the market shrugging off Fed tightening and sending the S&P 500 racing nearly 12% over the past two weeks, erasing nearly all of its year-to-date losses.

On any given day, it’s not uncommon to find a handful of stocks racing ahead 30%, 40%, or more. Of course, you might expect that when Mr. Market is in a good mood and most stocks are in the green. But even when the Dow and S&P are falling, there is still usually a group bucking the trend and making powerful ascents.

Up market, down market, sideways market… It doesn’t matter. There are almost always a few big movers and shakers.

Take Shaw Communications (NYSE: SJR), a normally sleepy Canadian telecom stock. About a year ago, investors went to bed with their shares having closed at $19. The following morning, they awoke to find the stock had spiked to nearly $28. 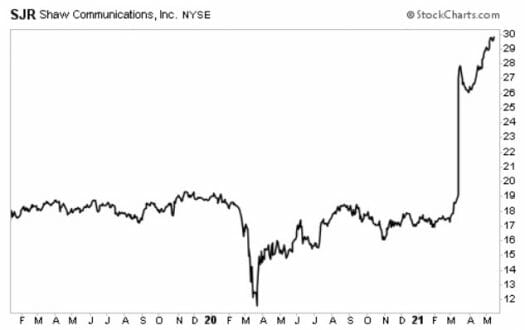 That’s a powerful upward jolt of 50% in a single day — from a stock that had gone nowhere in prior years.

Lightning struck again shortly after, this time with Nuance Communications (Nasdaq: NUAN). Shares of the artificial intelligence software provider had been limping along in the mid-$40s. Then wham! Out of nowhere, they surged as high as $54 one afternoon. That 20% jolt increased the net worth of NUAN shareholders by roughly $2.5 billion. 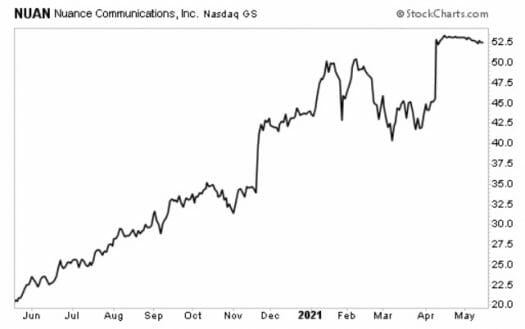 And it happened without warning, occurring not over a period of weeks or months, but in a matter of hours.

What could trigger these sudden upward spikes? Just about anything really. A sharp dividend increase, a long-awaited FDA product approval, a plum government contract… But most often, the stock is responding to a buyout offer.

These are by no means isolated examples. Barely a week goes by without a takeover bid being announced. Just follow the gains and you’ll find it. But to really pay off, you want to spot potential takeover targets ahead of the crowd. And therein lies the problem. It’s practically impossible to know where and when these deals will strike. Or is it?

I’ve Spotted These Deals Before…

You see, I’ve spotted more than my fair share of these deals over the years — and on both sides. And while mergers can certainly yield financial gains for the buyer, sellers are rewarded far quicker – within hours instead of months or years.

Case in point, a few years ago, I cashed out a healthy 125% profit on an aircraft leasing company called Aircastle. Much of that came in a single day in November when the company was approached by a Japanese buyer with a $2.4 billion check in hand. Before that, it was refiner CVR Energy. Before that, school bus operator Student Transportation. All netted outsized gains overnight.

Now, I want to be clear and tell you that I didn’t specifically single out any of these stocks just because I thought they’d bet bought out. I recommended them solely because they were quality, cash-generating businesses trading at an attractive discount to their respective fair value. Acquirers value these same traits, which explains why we sometimes zero in on the same stock.

Like I always say, when it comes to predicting takeovers, I do not have a crystal ball. Think of me instead as a meteorologist… trained to spot wind shear and other telltale signs of an imminent tornado… there is a specific set of conditions that often precede a takeover announcement.

You just have to know what to look for. And that’s why I launched my premium service, Takeover Trader, nearly two years ago.

We’ve had more than our fair share of success since then, including gains of 44%, 127%, even 321% — and more… But as impressive as those gains are, it could be just the beginning…

A “Feeding Frenzy” Of Deals Is About To Take Place

I think this is just the beginning of a major tidal wave of deal-making activity. So get ready for more in the coming months. The macro stars are aligned perfectly.

S&P 500 members alone (not counting the thousands outside the index) are estimated to have a $2 trillion cash hoard. Amazon (Nasdaq: AMZN) is sitting on $96 billion in cash, equivalents, and liquid short-term securities. Apple (Nasdaq: AAPL) has nearly $200 billion. And Berkshire Hathaway (NYSE: BRK-A) has a $146 billion cash hoard – mountains of money for Warren Buffet and his top lieutenants to go “elephant hunting”.

Combine that with buoyant corporate earnings and still-cheap borrowing costs, and there is plenty of funding on the table. Not only will these giants have the means to swallow up smaller competitors, but also the motivation.

Executives are always under pressure to grow the bottom line, which isn’t easy in this environment. At least not organically. Expect to see many companies form strategic alliances, unlock synergies and grow profits the old-fashioned way – by buying them. In doing so, they might also skip over years of work spent turning a raw idea into a viable product or service. Even Warren Buffett concedes it’s much easier to buy a competitively advantaged business than to build one from scratch.

This almost always means a bonanza for investors in the right place at the right time. That’s why my team and I have produced a brand-new research report dedicated to this new tidal wave of deals, targeting three key sectors…

Remember, we’ve already closed out on multiple triple-digit winners since launching this service two years ago. But that could be nothing compared to what we’re about to see. So I encourage you to check it out — because sometimes all it takes is the slightest whiff of a rumor to send a stock soaring, making it too late for investors who didn’t bite early.

Go here to check out my brand-new report right now.