Why Investors Should Look Down Under For International Exposure

Back in April, I made the case for why investors should give serious consideration to adding some international exposure to their portfolio.

As I said back then, if you’re not already doing this, you’re basically missing out on half the menu.

Over at my High-Yield Investing premium service, we practice what we preach. And that’s why we’ve added a couple of international holdings to our portfolio (in addition to the exposure we had already).

But in my most recent issue, I told my readers that now was the perfect time to look at one country in particular: Australia.

And today, I want to tell you why this country should be near the top of your list when considering international exposure for your portfolio. I won’t reveal the name of the specific pick we chose, out of fairness to my premium readers. But by the time you’re done reading this, you’ll likely have more than enough reasons to consider some Australian names for your own portfolio, too.

Australia At A Glance

What do we know about Australia? Well, there’s the Sydney Opera House, the classic 80’s tune Land Down Under (what is vegemite, anyway?), and Foster’s beer, which really isn’t all that popular among Aussies. And who could forget the late wildlife conservationist Steve Irwin, aka the Crocodile Hunter?

Pop culture aside, Australia is a stunningly diverse land filled with natural wonders. Everybody is familiar with the outback, a stark, arid ecosystem in the interior of the continent that is 22 times larger than the United Kingdom, but with more camels than people.

The famed uluru monolith (or Ayers Rock) near Alice Springs.

Less well known is the fact that Australia has waterfalls, gorges, fertile valleys, and tropical rainforests. Not only that, but along the coast, you’ll find wealthy cosmopolitan cities such as Perth, Brisbane, and Melbourne. More importantly, you’ll also find a highly-developed economy that fuels a wide range of attractive businesses.

The Australian economy is powered by a mix of manufacturing, natural resources, and services. Here is a brief look at some of the key contributors:

Agriculture
Agricultural exports total over $50 billion annually. The climate is conducive to wine production, and there are over 7,000 vineyards along the southern coast that process 2 million tons of grapes per year. Australia is also home to a massive cattle ranch that is larger in landmass than Belgium. There are 135,000 farms and ranches nationwide producing everything from sugarcane to olives to organic barley.

Tourism
When there’s not a global pandemic, more than 10 million tourists visit Australia each year. Some are there for the beautiful beaches. Others venture into the outback to see the otherworldly red desert landscape or experience the aboriginal culture. Perhaps the busiest destination is Queensland’s Gold Coast, which has more inland canals and waterways than Venice.

The tourism industry employs over a million people and contributes $30 billion to the local economy each year.

Finance
With a sound currency and well-capitalized banking system, Australia has become a global banking hub. There are more than 50 major banks, including trustworthy lending and wealth management institutions such as Westpac and Macquarie. Moody’s rates Australia’s financial system as among the most stable, citing disciplined lending, high reserve requirements, and strong residential and commercial real estate values.

According to the World Bank, this is also the easiest and fastest country on the planet in which to open a new business. All told, this sector accounts for more than 10% of the nation’s GDP.

Mining
Any discussion of Australia’s economy would be incomplete without a nod to the mining sector. The land down under has been geologically blessed with a bounty of minerals and other natural resources. Australia is the world’s largest producer of numerous critical raw materials, including bauxite (used to make aluminum) and iron ore (a key steel input).

It’s also the second-largest supplier of gold and lead, the third-largest producer of cobalt, zinc, and uranium, and the sixth biggest source of copper and silver. If that weren’t enough, the country also has sizeable oil and gas reserves, as well as huge deposits of precious stones such as diamonds, rubies, and sapphires.

There are roughly six hundred publicly traded mining companies on the Australian Stock Exchange (ASX). The country exports over $170 billion in metals, minerals, and energy products annually, accounting for more than 10% of GDP (versus less than 1% in the U.S). The soaring price of copper, cobalt, and other materials helped prop up the economy during last year’s downturn.

Now’s The Perfect Time To Add Exposure To Your Portfolio

This is by no means an all-inclusive list. Australia has one of the world’s most advanced healthcare sectors. It’s also a media and entertainment mecca.

Add it all up, and Australia boasts a GDP of $1.4 trillion, hefty output for a small population of just 25 million residents. That’s about $56,000 per capita, second-best in the world behind Switzerland. And this even-keeled economy has been nearly recession-proof over the past three decades.

It was the first developed market to fully bounce back (and eclipse) pre-pandemic levels. And the 2021 growth forecast has just been revised upward yet again (4.5% to 5.2%, depending on the source). Job creation has been brisk enough to drive unemployment below 6%, but not so fast as to trigger inflation.

Australia also has free trade agreements with over a dozen countries and benefits from proximity to hungry trading partners such as China and South Korea. More importantly, it doesn’t have to lug around the debt baggage carried by many developed economies, with a debt-to-GDP of 43% (versus 103% for the U.S.).

All those dollar devaluation fears everyone’s talking about lately? Well, they don’t apply to Australia. And any appreciation in the Australian dollar will only sweeten returns for foreign investors.

Yet, for all these positive attributes, Australian equities are still trading at bargain prices. The average stock was recently priced at 1.7 times book value, deeply discounted relative to historical norms and about half of the multiple on the S&P 500. 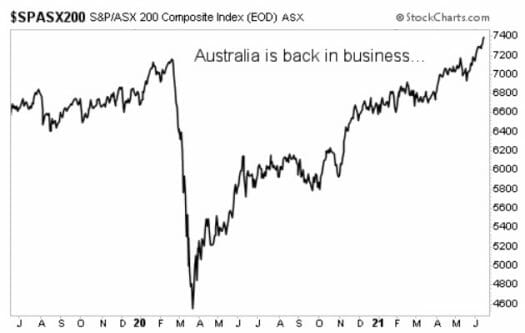 Of course, not every broker is equipped to buy and sell stocks trading in Sydney. My suggestion would be to do some research and see what your broker offers. Of course, there’s always the fund route…

My High-Yield Investing subscribers and I found a solid fund that conveniently holds dozens of Australia’s most profitable (and highest yielding) companies inside a single fund.

Not only does it offer convenient one-stop shopping for Australian equities, it also yields over 9%. Try getting that in the states…

To get the name of this pick, along with access to the rest of my portfolio, go here now.