How We Can Profit From The Fintech Revolution

Yesterday, I wrote about a megatrend that’s developing right now that we’ve all witnessed: the “cashless” society.

We’re talking about changing the way trillions of dollars trade hands. It’s a big deal, and one that was slowly playing out for years.

But now, it’s accelerating faster than ever. And I want to be in a position to profit.

One of the best ways to do this is by investing in the key players behind the “Fintech” revolution.

As I mentioned, Fintech is shorthand for financial technology. And these Fintech innovators have already upended the existing electronic payments infrastructure.

Some of the major names that are changing the way we pay for things are already well-known in their own right. I’ll cover a few of them today. But others are less known, and that’s why I’m making this a key focus of my research over at Takeover Trader.

Perhaps the most notable of these Fintech innovators is PayPal (Nasdaq: PYPL), which was spun from eBay (Nasdaq: EBAY) off back in 2015. Incidentally, I owned shares at the time. Today, my stake in eBay is showing a gain of 382%. Nothing wrong with that. But it pales in comparison to the 14-fold (1,380%) surge in my inherited PYPL stock. 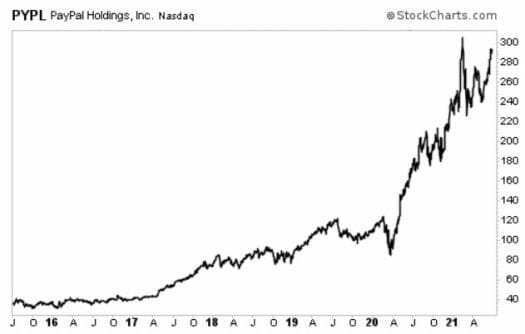 PayPal’s current market cap of $336 billion is nearly eight times larger than that of its former parent. And it got there by executing the simplest mission: shuffling money electronically between two parties. Anyone with a standard checking or savings account can use PayPal to transfer a few bucks to anyone else – maybe to repay a friend who bought your dinner last week.

Think of it as an eCheck. The service is cheap, fast, and secure. And you don’t have to disclose any sensitive bank or card information.

PayPal has since branched out into ancillary business lines. And it’s no longer just used for person-to-person transfers, but as a way to shop at thousands of online and brick-and-mortar retailers.

It was once thought to be a potential takeover target. But given its massive size, the company is now more likely to be on the buying end of any deals.

In fact, PayPal paid $800 million to acquire Venmo, its closest rival in the mobile person-to-person (P2P) money transfer space. Venmo now has more than 50 million users of its own. And it can be synced with multiple devices.

Square (NYSE: SQ) is another powerful player in this arena. Once upon a time, it was a small upstart with a novel card reader device that could be clipped onto a mobile phone or tablet, letting almost anyone accept debit/credit cards without the need for bulky and expensive terminals. It has since added a CashApp mobile money transfer service, as well as a full suite of small business tools and applications.

When Square made its market debut in November 2015, the business was worth $3 billion. Today, it has a market cap above $100 billion. 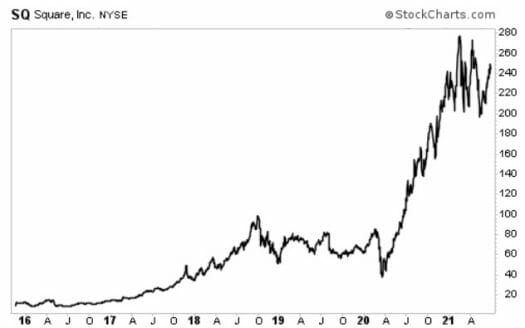 Not surprisingly, other tech giants (with seemingly endless funds at their disposal) are jockeying for position in this lucrative field. You might have heard of Google Wallet. Or Apple Pay. Or Facebook Pay.

Not surprisingly, Amazon is also making a push and has teamed up with mobile payment infrastructure provider Stripe. While still privately-owned, Stripe has heavy support from venture capitalists and is already worth $95 billion – a ten-fold increase in just a few short years.

The Road Ahead — And How We Can Profit

Now, PYPL and SQ have both treated their shareholders to some incredible gains over the past few years. And I’m sure there will be more ahead. But at this point, they’re a little too big a fish to swallow for all but the biggest tech names.

That’s why I’ve also got my eye on companies like Melio. The company hasn’t gone public (yet) — but it’s another potential future star that specializes in business-to-business (B2B) mobile payments. It’s much easier and quicker to pay invoices electronically than to write a check and drop it in the mail – which explains the company’s 2,000% growth last year. Melio doesn’t specify whether that is transactions or revenues, but either way, it’s a big number.

But the future is already here for one Fintech leader, which provides critical behind-the-scenes services for giants like Apple and Amazon. As I told my Takeover Trader readers just a few days ago, 2021 could be a breakout year.

Make no mistake… You’re going to be hearing a lot more about the Fintech revolution in the months and years ahead. A lot of the big IPOs in the coming years will likely be Fintech names… and I wouldn’t be surprised if one of the Big Tech names scooped up one or more of the key players in this space, either.

A few months ago, my colleague J.R. Butts released a list of seven bold investment predictions…

Six of them are already in the green. His call for rising copper prices, for example, was spot-on, and his stock pick is already up +36%. Now we’re releasing a new prediction for June… a bullish call that sees silver topping out at $200/ounce… And you won’t believe the reason why...

Discover the dirty details behind the coming “silver surge” now.