Is Inflation Really The Villain We Make It Out To Be?

There’s a lot to keep an eye on in the market these days. Over at my premium newsletter, Top Stock Advisor, a slew of our holdings will release financials at the end of the month and into early August.

Outside of the upcoming earnings season, there is the emerging “delta” variant that seems to be worrying some.

And then, of course, inflation continues to be a hot topic. I’ve touched on this a number of times in the past few months, but some new developments are worth discussing.

Where We Stand With Inflation Right Now

On July 13, the Bureau of Labor Statistics released inflation data for June. The consumer price index (“CPI”) rose 5.4% year over year. That’s the most since August 2008.

Even looking at core CPI, which strips out food and energy prices, which tend to be more volatile, prices still climbed 4.5%. That’s the biggest increase in nearly 30 years, dating back to November 1991.

Remember: November 1991 was near the beginning of the “Roaring 90s”, and the S&P 500 ripped off a 269% return over the following eight years. Food for thought.

But the big inflation numbers are coming from the auto sector. Used vehicle prices jumped 10.5% month over month. On a year-over-year basis, they were up a staggering 45.2%. 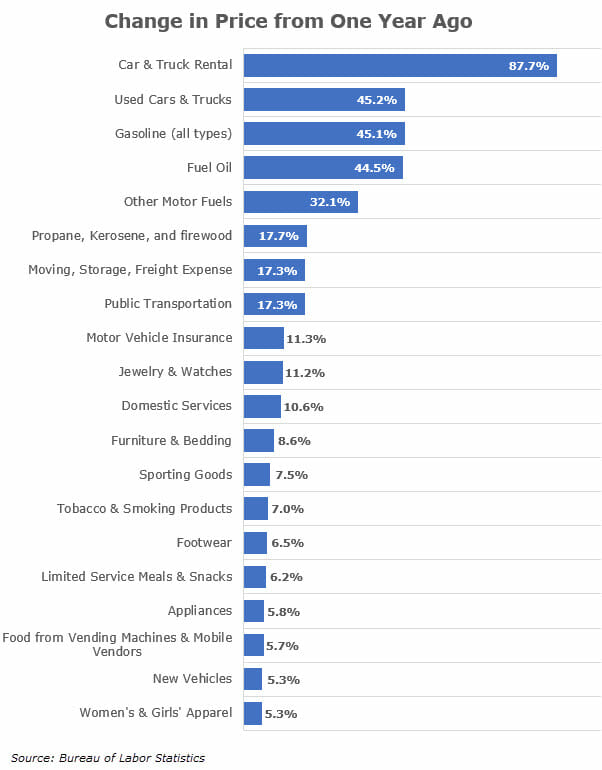 And if you’ve tried renting a vehicle lately, then you may have noticed how absurd those prices have become. Vehicle rental prices were up 87.7% year over year.

Perhaps surprisingly, new vehicles have only seen prices increase 2% month over month and are up 5.3% from a year ago.

You can see from this chart the surge in consumer goods and services prices:

Even if investors are worried about inflation (shares of the major indices fell on the inflation news), the Federal Reserve isn’t.

The Fed calls the inflation that we’re seeing “transitory,” not permanent. They argue it’s a reaction to the sudden opening of the economy and a hangover on the supply chain side of things from the pandemic.

Many economists believe the inflationary pressures should subside once we get to fall and supply chains have had a few months to catch up.

Is Inflation Really So Bad?

Whether this is how things play out remains to be seen, of course. And while I have warned readers about the damaging effects of inflation, I do want to point something out…

While the inflation fears have certainly made our portfolios more volatile, and things more expensive, a recent New York Times Dealbook article suggested that inflation may actually be a good thing… up to a point.

Here’s a snippet of the article:

“Inflation has long been seen as the economic villain. That view is changing. For those who worry about growing inequality, inflation might actually be a salve, up to a point. A 2014 study of developed economies found that as inflation rose, income inequality tended to shrink. Inflation could be as high as 13 percent, the research found, and still act as an equalizer, shifting the benefits of economic growth toward lower-income individuals.

Wages often rise with prices, as they have in recent months. What doesn’t rise with inflation are college loans and other debt. Reducing the burden of debt with higher incomes could help improve many Americans’ finances.”

If moderate inflation leads to more people earning a living wage, then that’s certainly not a bad thing.

While the inflation talk will likely subside as we enter earnings season, you can bet that it’ll continue to be a topic of discussion for the remainder of the year.

And one thing we will need to keep an eye (or ear) on isn’t so much the inflation, but what the Fed thinks of the inflation. Because if there’s one thing that the market hates more than inflation right now is the Fed abandoning its easy monetary policy and rising rates.

In the meantime, my advice is to stay focused on what’s happening with inflation… as well as the other factors that are moving the market right now (earnings and the “delta” variant of Covid-19).

But don’t let any of these take your primary focus away from finding opportunities in this market. As I often tell my readers, our job is to find wonderful companies trading at reasonable prices. If we can manage that, then we should be fine in the long run. It’s that simple.

You may remember that my staff and I released seven major investment predictions back in January… along with specific stocks to buy to capitalize on each one of them. So far, 6 out of 7 are up, and one has already gained 391%. But our new “bonus” prediction may be our boldest one yet…

It involves the world’s largest silver deposit… and how a big push for nationalization in this South American country (plus inflation) could drive silver to $200 an ounce. Here’s how to capitalize on the move before it’s too late.