Why It Pays To Pay Attention To The Takeover Rumor Mill…

He has to be the most hated and reviled man in the state of Louisiana. Just the mere mention of his name usually elicits a few colorful four-letter words. I’m talking about Alabama head football coach Nick Saban.

You see, Saban used to be the beloved coach of our own LSU tigers. He turned the program into a national powerhouse that steamrolled the competition in 2003, culminating in the first National Championship since 1958. Usually, in the South, that kind of thing gets a statue built in your honor. So why all the hostility now?

Because not long after hoisting the trophy, Saban bolted for the NFL. It wasn’t so much the defection itself that bothered people (nobody would begrudge an employee for making an upward career move that doubles your annual salary to $5 million). But rather, it was the sneaky and under-handed departure.

How The Rumor Mill Works…

Sports media outlets had long been speculating that Saban was under consideration for a top-level coaching position. It made a lot of sense – the guy had nothing left to prove at the collegiate level. But he was quick to dispel the rumors and claimed to have little interest in pursuing an NFL job. As the team prepared for its New Year’s bowl game, Saban privately assured his players that he wasn’t going anywhere.

But just a few days later, on Christmas, the entire state was stunned to learn that Saban had already accepted an offer to be the Miami Dolphins head coach. Many saw it as an act of betrayal. Even loyal supporters felt stabbed in the back by the clandestine meetings and lies. Saban has since said his decision to leave LSU was the worst of his professional career.

I was reminded of all this a few weeks ago while watching a Comcast (Nasdaq: CMCSA) spokesperson squirm on live television trying to dismiss rumors of a buyout as “pure speculation”. The Wall Street Journal had recently published a piece suggesting that the cable giant was on the prowl for an acquisition.

Are the rumors unfounded? Possibly. But in my experience, there is usually some truth to these leaks. That’s why I don’t fault Nick Saban’s lack of candor. Be it college football or a multi-billion dollar corporate merger, both require the utmost secrecy. And if rumors do fly, then they must be quashed. Until it’s time to spill the news, the best course of action is to deny, deny, deny.

Comcast is certainly doing its part to deflect and downplay any potential talks and has suggested the company is perfectly happy with the status quo. CFO Michael Cavanagh told reporters “we feel like we’ve got all…we need.”

The Wall Street Journal thinks otherwise, claiming that Comcast is in advanced talks behind closed doors. Unnamed sources suggest the company could be making an offer for none other than Roku (Nasdaq: ROKU).

Profiting From The Rumor Mill…

Over at my Takeover Trader premium service, we’ve been in ROKU since June of last year. And while we’ve had our fair share of big winners since launching the service, ROKU has been our biggest.

Part of the reason for that is because the company is firing on all cylinders. But it also helps when it’s the subject of takeover rumors again and again… 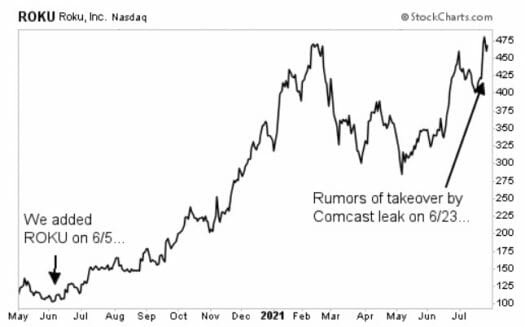 At this point, it doesn’t really matter if the rumors are true. There might be a deal on the table, there might not.

What matters is that ROKU shares have zoomed from $350 to $480 over the past month. All it took was just the rumor of a possible buyout to reach the ears of a few well-connected institutional players who quietly began accumulating large blocks of the stock. Hence the powerful 40% rally.

Keep in mind, Roku already had a $45+ billion market valuation before this surge. It wasn’t cheap. So even if there were an offer, it might have only had a 20% or 30% premium attached – and I’d have been happy with that.

ROKU has certainly helped its cause, lifting sales and gross profits 79% and 132%, respectively, last quarter. New investors to this stock should be warned, though… this latest advance has been fueled primarily by takeover speculation.

That’s why I made the decision to nail down these profits in the form of a hard stop-loss over at Takeover Trader. I’m not selling outright because a bid may indeed be forthcoming. But if not, then this gain could unwind quickly.

So regardless of what happens, we will have entered ROKU near $100 and exited a year later above $400 – a rare four-bagger.

But that’s only part of the reason why I’m writing this. As you might have noticed, M&A activity has been on the upswing lately. Part of the reason is simply making up for lost time in 2020 – but there’s more to it than that. And as the ROKU example shows, it can be extremely profitable to pay attention to this space.

That’s why I released a brand-new report detailing some of the powerful forces at work that could make this year the year of the “Mega Merger”.

So while it may be too late to capture the huge win we’ve seen with ROKU, it’s not too late to get on board with our next target.