I doubt you’ve ever heard of the town of Conover. Located in northeastern Iowa not far from the Minnesota border, today it consists of little more than pastureland for farming and grazing cattle.

But this rural crossroads once boasted more than 1,200 inhabitants, 200 buildings, and 32 saloons. It was also the birthplace of what is now the largest privately held business in the United States.

It all started in 1864 when the McGregor Western Railroad had plans to build a track through the town, connecting America’s larger Eastern cities with its vast Western frontier.

Eager to capitalize on the upcoming railroad, locals quickly got to work laying out a town grid and throwing together buildings. By the time the railroad arrived in August 1865, Conover was a bustling small town and an important regional center for commerce brought by rail.

That same summer, a young man named William moved out of his family home in Janesville, Wisconsin, and followed the railroad to Conover.

The 21-year-old son of a Scottish sea captain, William made a modest but savvy purchase that would sow the seeds of one of America’s largest family fortunes, worth an estimated $47 billion today.

The Start Of A Legacy

America was undergoing two revolutions during the late 1800s. The shift in agriculture and transportation were forever reshaping America’s economy — and the town of Conover was at the center of both trends.

Like many visionary entrepreneurs throughout history, Will had an innate understanding of the economic shift that was unfolding at the time, and how to profit. So in 1865, he purchased a grain flat house in Conover, a type of grain storage facility similar to a grain elevator. Farms in the region would deliver their grain, which would later be loaded up for shipment by rail. 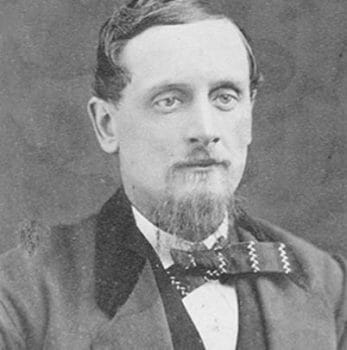 A year later in 1866, Will was joined by his brothers Sam and James and formally launched their family business. The three brothers followed America’s rail network west, buying or building grain elevators and storage terminals in strategic locations along the line. Over time the scope of the business also expanded to offering farm insurance, grain trading services, lumberyards, and flour milling.

The company also acquired farmland and real estate throughout the Midwest and even a railroad.

By the 1880s, Will had moved the headquarters of the business to LaCrosse, Wisconsin. And the business was operating major grain trading terminals in Minneapolis, Buffalo, and Duluth, Minnesota.

A global agricultural giant with more than 155,000 employees, serving customers in 70 countries, and raking in more than $114 billion in annual revenue, it’s one of the biggest companies most people have never heard of…

That’s partly because, unlike many multinational companies, Cargill is still largely family-run. About 90 family members combined own 88% of the company. According to Forbes, eight of the family members are billionaires.

Legacy Assets Like This Are The Key To Building Wealth

Through two world wars, the Great Depression, countless financial panics, and periods of boom and bust for agricultural commodities, the business that Cargill built in 1865 has continued to generate wealth for its owners for more than a century and a half.

That makes Cargill a prime example of what I call a “Legacy Asset.”

You see, Legacy Assets are companies or resources that have rewarded owners for generations, often thanks in part to a durable brand or service or infrastructure system that has stood the test of time.

Unfortunately, we can’t buy shares of Cargill. Its management team seems content keeping the company private. But lucky for us, not all Legacy Assets are private companies…

There are a handful of publicly traded stocks that share some of the key characteristics that allowed Cargill to endure through decades of both good and bad times. And we own quite a few over at my premium advisory, Top Stock Advisor.

These Legacy Assets have consistently paid a dividend and returned capital to their owners for decades. And they’ve generated impressive wealth for ordinary folks like you and me.

The best Legacy Assets, like Cargill, are investments that you can pass on to your kids and grandkids. These businesses can continue to benefit a family for generations, much like how Cargill has made its founding family among the wealthiest in the world. (The Cargill-MacMillans are the fourth richest family in America, according to Forbes.)

The Latest Legacy Asset In My Portfolio

This month, over at Top Stock Advisor, we added yet another Legacy Asset to our portfolio. 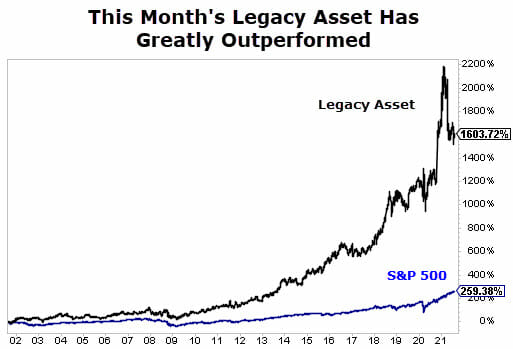 Here’s the remarkable thing about a stock like this… When most people take a look at the chart above, they automatically assume they’re looking at a chart of a high-flying tech stock. Or maybe a company that developed a lifesaving drug.

Yet nothing could be further from the truth.

We’re talking about a company that makes a “boring” product that is likely in every household across America.

By making a simple product that everyone needs and maintaining a stranglehold on its market, this company has made more than 33 years of consecutive dividend payments and delivered a whopping 1,600%-plus return. And best of all, it’s currently trading at a fair price.

The point is, we’ve done quite well owning Legacy Assets in our Top Stock Advisor portfolio over the years. And there’s no reason to think this time won’t be any different.

If you don’t already own at least a few Legacy Assets in your portfolio, it’s time to start.

P.S. I recently found a company that’s sitting one of the most exciting (and profitable) Legacy Assets I’ve ever seen…

Just recently, a little-known satellite company quietly purchased an Internet tech startup at a bargain basement price. But most analysts on Wall Street completely missed a key detail about this transaction that could lead to a huge windfall for years to come.