The investment world is filled with big personalities and big egos. You become even more aware of this narcissism after something drastic happens like a market correction or a full-blown bear market.

This is when the permabears hop up on their soapbox and tell everyone that they were “right,” and they saw this coming.

Even if they didn’t see it coming, over time they tell themselves that they did and begin to believe their own lies. Months and years down the road, they begin telling people that they were one of the only ones that provided a “warning.”

Just look at the financial crisis as an example. Very few people actually saw it coming, much less profited from it. Yet today you’ll find thousands of people who claim that they warned of the looming housing crisis.

Headlines like “the guy who predicted the last financial crisis issues new warning,” really annoy me. And it’s not because I’m jealous or resentful that I didn’t see the housing crisis coming. I didn’t. In fact, I was thousands of miles away from Wall Street enjoying Argentina, Patagonia, and the Galapagos Islands. At that time, I was barely paying attention to what was happening on Wall Street.

The AD Line Comes Through Once Again…

That said, I will weigh in on my opinion of the market and particular stocks. After all, it’s what I’m paid to do. In fact, for the past couple of weeks, I’ve been warning readers that one of my favorite indicators – the AD Line – was flashing red.

In fact, as you can see in the chart below, it flashed twice. 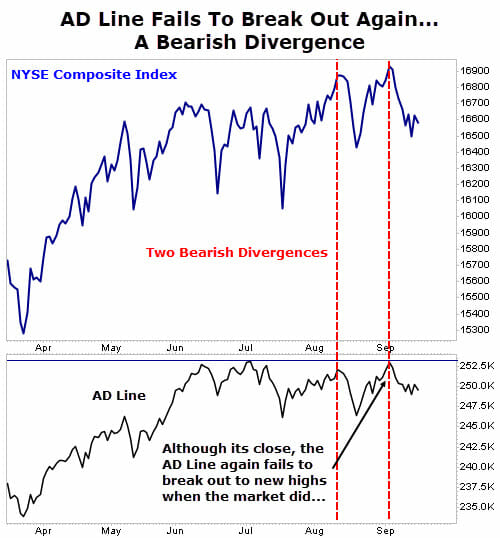 To recap, the AD line is what’s known as a breadth indicator. When the market is rallying, ideally you want to see a large number of stocks that are reaching new highs. This means that the bull market is healthy, and it confirms the bullish trend.

However, if the AD Line fails to keep pace with the underlying index, this is a sign of weakness. It’s what market technicians call a bearish divergence. This is exactly what happened – twice – which caused me to warn that we may see a pullback in the market very soon.

Fast-forward, and as I’m writing this, the market is off by about 5% from its recent high. That’s halfway to a correction, which is officially 10%. But as I’ve warned before, it’s dangerous to assume anything with too much confidence.

This brings me to a larger, more important point. Few feelings are as satisfying as being right. Especially if you made a good call when everyone else was going in the opposite direction.

Unfortunately, it often leads to overconfidence, which then leads to future dismal results…

You see, a giant problem with nailing a big call is that you often become even more entrenched in your worldview. You fail to adapt to the ever-changing landscape. You end up wallowing in confirmation bias, and savoring — and promoting — your one-time victory, rather than wondering what happens next or trying to understand what’s going on around you.

But here’s the thing… the market will just as quickly humble you as it will reward you.

If you’ve been investing for any amount of time then you’ve likely learned that trading stocks, options, or futures is not easy. Our emotions, behaviors, and egos make it even more difficult.

One of the biggest threats to successful trading or investing is hubris and intellectual arrogance. You dismiss trends, financials, or arguments that you don’t want to see or hear. You don’t take responsibility for being wrong. Instead, you blame a flawed financial system, or the Federal Reserve, or something else. You then make it your mission to argue against that “wrong” in the market.

But if you want to make money in the markets, then pay attention to the facts on the ground rather than your own prejudices. It can be a tough pill to swallow, but you have to check your ego (at least some of it) at the door when it comes to trading and investing.

My point is that while my projection about what the AD Line was telling us looks like it was correct, we shouldn’t get too far ahead of ourselves. This could be a simple, healthy pullback. It could also turn into a full-blown correction – which is also normal and healthy, by the way.

I’m not going to make any grand projections further than that. What’s more, I know that I’m going to be wrong and lose money at some point. I’ve learned this the hard way… over and over again.

It’s part of the game. And while it still stings when I close out a trade for a loss, I know that I’m making the correct decision by keeping those losers small. I can make up a 10%, 15%, 20% loss much easier than I can a 50% loss (which requires a 100% return just to get back to even).

Editor’s Note: The mainstream media is starting to go CRAZY over the news that Elon Musk’s Starlink internet service will come out of beta next month. And YOU should be excited too…

Because even though Starlink is “off limits” to regular investors… we’ve uncovered a “silent partner” that gets you in on the ground floor… lightyears ahead of other investors. Click here now to see how you can get in on the action.