The Fed Taper, Interest Rates, And The Bigger Picture…

Last week, while we were discussing the situation in China with the Evergrande Group meltdown, the Federal Reserve made some big news that sent markets sharply higher.

Fed Chair Jerome Powell officially announced that the central bank will begin tapering asset purchases. While that’s not exactly new news, per se, what is news is that it could begin as soon as next month and end by mid-2022, assuming nothing changes.

(This is the part where we can chuckle to ourselves about nothing changing between now and then.)

Remember, the Fed has been purchasing up to $120 billion in U.S. government debt and mortgage-backed securities per month. This has undoubtedly had a dramatic effect on money supply, lowering long-term interest rates, and pushing investors further along the “risk” curve into other market assets.

What’s more, the Fed telegraphed that it may raise interest rates a bit faster than anticipated.

According to the latest “dot plot,” nine of the 18 Fed officials surveyed said that they would be comfortable raising rates next year. 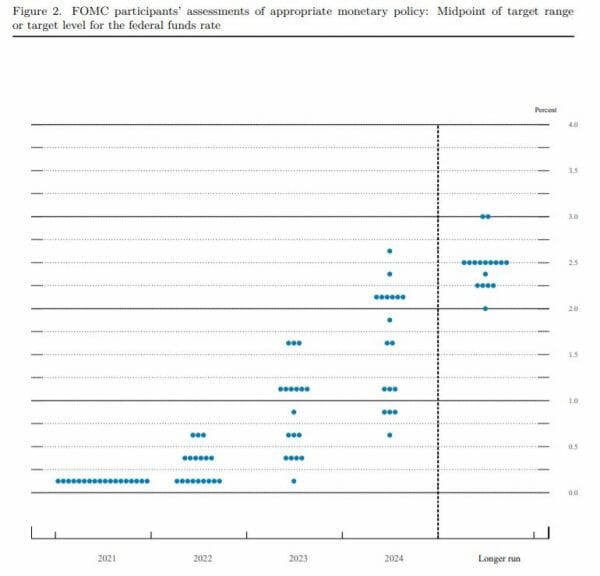 This came as somewhat as a surprise to most Fed-watchers. Some may worry that this all feels a bit too soon.

On the one hand, the Fed seems to be acknowledging (perhaps begrudgingly) the persistence of inflation. Officials now project 4.2% inflation for 2021, more than double the Fed’s 2% target, but for the rate to normalize back to 2.2% next year.

That passes one of Powell’s outlined criteria for raising rates.

On the other hand, some worry if this hawkish turn – specifically the prospect of raising rates next year – is perhaps a bit too soon. Fed officials projected gross domestic product (GDP) to rise 5.9% in 2021, a sharp downward revision from the 7% projected back in June. What’s more, as we briefly touched on in these pages, we had a dismal jobs report in August. The U.S. Census Bureau reported only 235,000 new jobs, well short of the 720,000 that were expected.

While the Fed has taken unprecedented steps to stimulate the economy, so has the U.S. government. And this has had a profound effect on U.S. household wealth. 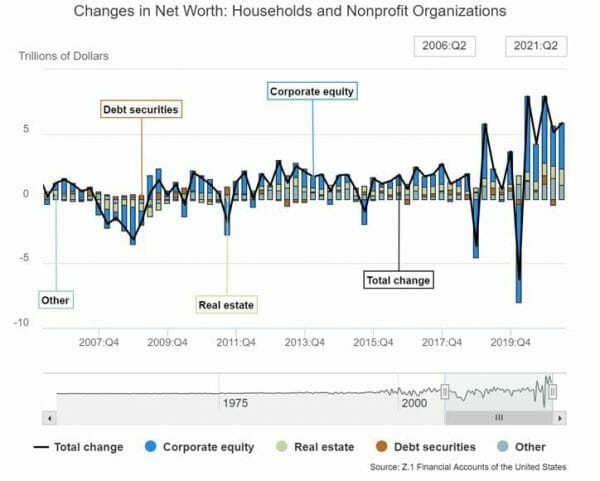 Driving much of this gain is, of course, surging real estate prices. About $1.2 trillion of that wealth came from real estate, with home equity rising to 67.7%, the highest level since 2008.

Where did the rest come from? A little place you may be familiar with… it’s called the stock market.

U.S. households gained $3.5 trillion in wealth from the stock market, as all of the major indices have eclipsed their pre-covid highs… and then some.

But as stimulus measures begin to wind down, investors should take note. Household debt also rose in the second quarter (by 7.9%).

It’s important to give these developments their proper context.

Keep in mind that of the Fed members who project rate hikes next year, only three project two rate hikes, while the remaining six expecting one. That means rates will remain low next year, and likely beyond that. That means the easy-money party will continue for quite some time.

Yet, as I’ve mentioned several times, global supply chains are in an absolute mess right now and threaten to derail much of the progress we’ve made this year. Then, of course, there’s the coronavirus. While the CDC recently approved boosters for over-65 Americans, the Delta variant continues to worry everyone from employers to employees (and would-be employees) to economists and investors.

This week, key votes are expected to take place on President Biden’s $1 trillion infrastructure package, as well as the $3.5 trillion spending proposal. As for the jobs situation, we’ll know more when the September jobs report is released on Friday, October 8.

We’re at a key moment in the pandemic recovery. There’s plenty to be worried about… volatility is spiking, and economic and political news threaten to derail what’s been an amazing run for the market — and investors.

This is one of the reasons why my colleague Nathan Slaughter has been telling readers that they should have a stable of quality dividend payers in their portfolio that can hold up in any market.

You see, you don’t necessarily need to reach for risky “growth” stocks to strike it rich. With the right income stocks, you can build an incredible amount of wealth over time.

And that’s where his latest report comes in…

Nathan has handpicked 5 of his absolute favorite dividend payers… He considers each one of them to be “bulletproof” – meaning you can build your portfolio around them, sleep well at night, and watch the income roll in year after year.