The Perfect Way To Profit From The Shipping Crisis…

Today, I want revisit the ongoing discussion regarding what’s happening with global supply chains over the past few months.

In case you weren’t aware, there’s a crisis brewing at ports around the world.

I touched on the situation recently. To recap, here’s what I said in that piece…

“…And in Long Beach in particular, the situation is dire. Last week, I pointed our premium readers to this article, from FrightWaves.com. At that time, a record 65 containerships were sitting in San Pedro Bay, just waiting to enter. And that’s just the beginning of the problem, because all those ships have to be unloaded, warehoused, and trucked off…”

I’ve been keeping track of this number over the past few weeks. As of Friday, there were 62 ships. At one point, it got as high as 70.

The problem is not limited to Los Angeles and Long Beach, either. As of Friday, there were reportedly 154 containerships waiting to load cargo outside of Shanghai and Ningbo in China. And countrywide, 242 ships were waiting outside of various ports.

Measures have been taken to try and alleviate the situation, such as increasing port operating hours. But part of the problem is simply a shortage of labor, at ports, railways, warehouses, and trucking firms. According to industry watchers, there is no immediate end in sight.

How We Can Profit…

When looking for a great investment, I’m a fan of identifying a problem and then looking for a company with a solution. It sounds simple, but trust me, successful investing really can be that simple.

In that previously linked piece, I told readers about one way my colleague Nathan Slaughter and his High-Yield Investing subscribers have been profiting. He identified a shipping company back in January that was perfectly positioned to take advantage of sky-high charter rates. As it turns out, he was spot-on – that pick is up by 110%, while continuing to pay out a healthy 4% yield. 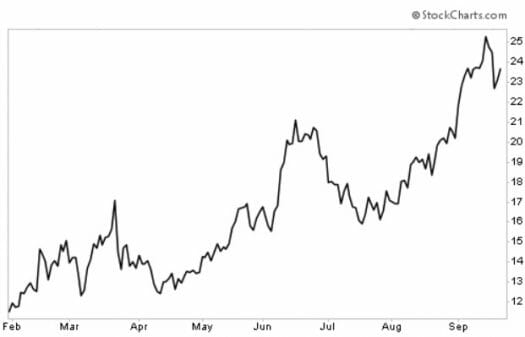 I won’t mention that “Buy First” pick out of fairness to his subscribers, but it isn’t difficult to research that idea on your own. Instead, I want to tell you a bit about another pick that’s perfectly positioned to profit…

Back in November, Nathan also told High-Yield Investing subscribers about another great play on this theme. It’s a company that makes shipping containers – the workhorse of the global shipping industry.

As Nathan pointed out recently to subscribers, the price of a new 20-foot shipping container straight from the factory will now set you back a cool $3,800 per unit. A large containership can easily fit more than 20,000 of these containers on their deck. That means it would take about $76 million to fully outfit a large containership.

Most shipping lines have no interest in bearing that kind of up-front expense. So they lease these containers instead. And that puts this pick right in the sweet spot…

With global trade disrupted by the coronavirus, related shutdowns, as well as persistent labor and material shortages, shipping companies are desperate to keep up with demand. In fact, its fleet of containers is 99.6% leased, with revenues and profits surging.

Here’s what Nathan had to say about the company:

…I applaud management for increasing its asset base in this environment. The company has invested $3.4 billion in new containers so far this year, about 400,000 of which were hired out last quarter (under very favorable terms). Most of the rest have already been pre-leased even before they leave the factory floor.

Considering the average lease is 13 years, this explosive growth period will drive future revenues and cash flows well into the next decade.

What’s more, while this stock has rallied somewhat, it still has some catching up to do, trading at less than seven times earnings. It also sports a 4.5% yield. 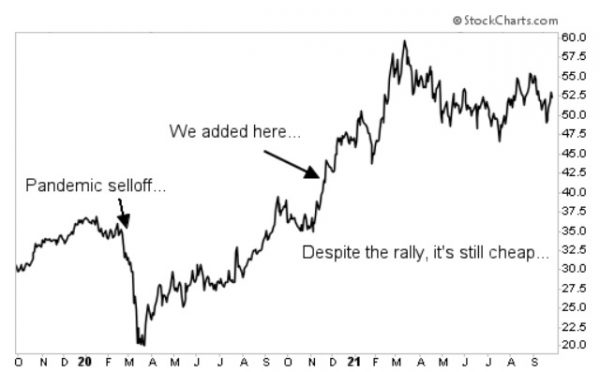 Add it all up, and you have another no-brainer way to profit from a company that will play a key role in fixing the troubling situation with the global supply chain.

While most investors are finding it difficult to fund high yields in this market, Nathan and his subscribers are having no trouble whatsoever.

As Nathan likes to say, the high yields are out there. You just have to know where to look…

These are the kinds of ideas you won’t hear about anywhere else. To get access to this pick, as well as Nathan’s other top buys, go here now.