In case you haven’t noticed, the topic of insider trading has been making the rounds in the financial news lately.

Now, I know there is a lot of other things going on that have a more direct impact on your portfolio. But this is a fascinating topic, to me anyway, and so I’d like to spend some time discussing it today.

You may not realize it, but what constitutes “insider trading” has a lot of grey areas…

For some regular folks like you and me, it might seem relatively black and white. Don’t trade on non-public material information. Period. But there’s a lot more to it. And as much as we would like to think we would all always make the right decision, it can be very difficult (for most) to be staring at a winning lottery ticket (making a trade you know will be profitable) and not be able to pick it up.

When I worked at a bank managing money, I had to close all my external personal brokerage accounts and transfer any securities to the bank’s brokerage platform. And there were so many rules involved with what stocks I could buy, and when I could buy them, that I honestly didn’t even bother with stocks or options. I was wary of my actions because I had securities licenses on the line.

Last month, the Securities and Exchange Commission charged an employee of a company with insider trading. Even though he didn’t trade his own company’s stock…

Matthew Panuwat was an employee at a publicly traded biopharmaceutical company called Medivation. At the time he was head of business development. Panuwat learned through his job that his company was about to be acquired. He then went out and bought call options on a different company, competitor Incyte Corp. (Nasdaq: INCY).

His likely theory was that the news of his company’s acquisition would be good news for Incyte, a company similar to his own, and the SEC wouldn’t go after him for insider trading as he wasn’t an Incyte insider.

Sure enough, when it was announced that Pfizer (NYSE: PFE) would acquire his company — Medivation — for $14 billion, shares of Incyte (and other biotech firms) also climbed on the news. However, the SEC sued him for insider trading, arguing that the information he had was material to Incyte’s stock and he had a duty to Medivation to keep it confidential. 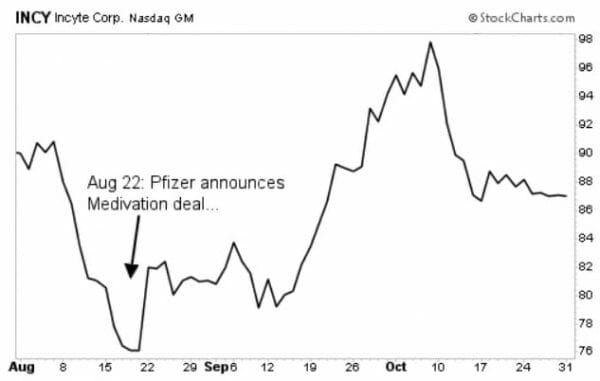 In the SEC’s statement it claims that “by trading ahead of the announcement, Panuwat generated illicit profits of $107,066.”

This was a clever twist on insider trading and one I haven’t really seen the SEC crackdown on (although it may set a new precedent). However, it turns out that this type of trading is somewhat common.

Mihir Mehta, David Reeb, and Wanli Zhao did a deep dive on this type of activity, writing an entire research paper and blog post on the topic. In their research, they found evidence that employees regularly “facilitate trading in their firms’ business partners and competitors to circumvent insider trading regulations designed to limit their ability to exploit private information.”

By their calculations, these shadow trades generate an average profit anywhere from $140,000 to more than $650,000.

Insider Trading Among The ‘Elite’

The SEC has an extremely difficult job to do and simply doesn’t have the manpower to police and catch everything. And even when some eyebrow-raising things come to light, and nothing happens, it can be frustrating.

For example, in January last year after a briefing about the emerging threat of the coronavirus, four U.S. senators sold stocks. In some cases, millions worth of stock. And as you may recall, about a month later markets were clobbered. Good timing on their part, I guess…

More recently there’s been a lot of news about other politicians trading in stocks and stock options. And two top Federal Reserve officials stepped down as revelations about their financial trading were exposed.

Then the Wall Street Journal broke a story about over 130 Federal Judges who oversaw cases in which they or their families had a vested financial interest.

Only time will tell if the SEC charges any of these folks.

In the meantime, on September 29, the SEC charged a Goldman Sachs compliance analyst out of their Poland office with insider trading. The complaint alleges that analyst Jose Sanchez generated more than $471,000 in ill-gotten gains. Ironically, Sanchez’s job at Goldman Sachs was “preserving the integrity of the information barriers” including compliance and insider trader rules.

I don’t know about you, but it seems that if you’re going to trade on inside information you might as well go big. No sense risking it for $100 grand or $400 grand. Go for millions or billions.

Also, that is not investment advice.

The point is, none of this is particularly new. But I suspect we’re going to be hearing more about it in the months to come.

But instead of getting discouraged about the market being “unfair” or the “rich getting richer,” remember that we still have an opportunity to make incredible wealth in the market.

I believe the formula is relatively simple. Buy shares of fantastic companies trading at reasonable prices and hold them for the long term. That’s the core of your portfolio. Then, reserve a space for taking swings at what I call “game-changing” stocks – the innovative companies working on products and services that none of us knows we need, yet will become indispensable parts of our lives and the way we do business in the future.

And speaking of that last part, I just released a report about Elon Musk’s latest venture — and how a “backdoor” way to invest could make early investors a killing…

If you haven’t heard of Starlink yet, you soon will. That’s because after extensive beta testing, the billionaire entrepreneur is about to go “live” with the service soon. But even though Starlink is “off limits” to regular investors, we’ve uncovered a “silent partner” that gets you in on the ground floor… lightyears ahead of other investors.

Go here now to see how you can get in on the action.