Here in the U.S., we’ve grown accustomed to cheap natural gas for years. That was certainly true during the height of the Covid pandemic as well, with prices below $3 per million British thermal units (mmBtu) for most of 2020.

But we’re in a different world this year. Prices have been on a furious run since April and now sit at $5.77 as I write this. And if you think that’s bad, you should see what prices are overseas – they’re six times higher, sometimes more. 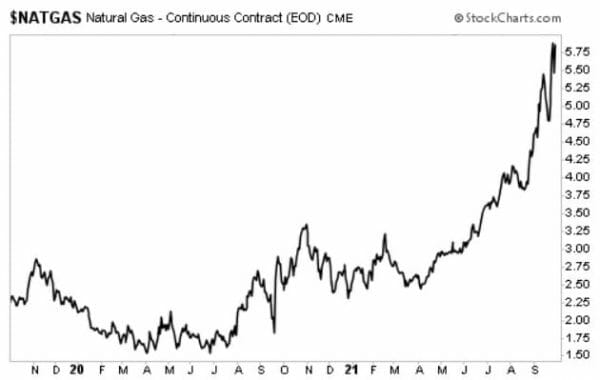 There are a few contributors to the stateside situation, from higher usage to tighter regulation to squeezed infrastructure brought on by the pandemic and hurricane season. Honestly, there’s enough going on here to fill an entire issue of my premium newsletter, High-Yield Investing.

But I’m more interested in the long-term picture, and how we can profit.

That’s why I recently told my subscribers about the immense opportunity in liquified natural gas.

Unless you’ve been living under a rock, then you know that the world is gradually phasing out coal from the power grid. But across from any loser, there is a winner. In this case, natural gas has supplanted coal as the chief power source in the developed world.

Natural gas accounts for one-third of the electricity in the United States, more than coal, nuclear, hydroelectric, wind, and all other sources. That’s partially because it’s plentiful and inexpensive (yes, even after the run-up), but also cleaner-burning and more environmentally friendly. Natural gas will play a key role in meeting the future energy needs of a growing world.

Fortunately, we have abundant supplies trapped in basins such as the Marcellus Shale and Haynesville Shale. The United States is the world’s largest natural gas producer, with output expected to surge to 97 billion cubic feet per day this year (far more than we need).

But other nations like Japan, India, and Korea are starved for supplies. They lack the homegrown production to meet their needs and must rely on imports to bridge the gap. The supply/demand situation is far tighter in Tokyo than in Houston (for instance), so gas prices have historically been much higher in many foreign markets than here at home.

Exports have opened a gateway connecting U.S. suppliers with overseas buyers willing to pay two to three times as much. The question is, how do we get it there?

The Federal Energy Regulatory Commission (FERC) has given the green light to more than a dozen liquefaction facilities and export hubs here in the United States. These plants refrigerate billions of cubic feet a day, sending out cargoes of liquid gas to customers in Latin America, Asia, and elsewhere.

And we’re not alone.

There are about 15 countries that produce LNG, led by Australia, Qatar, and the United States. And exporters have their hands full, considering the number of countries receiving imports has quadrupled from 10 to more than 40.

With ravenous appetite from power plants, steel mills, and other users, China has just surpassed Japan as the world’s largest LNG consumer. Chinese natural gas imports have risen another 24% over the past six months to 60 million metric tons, over half of which was in the form of LNG. 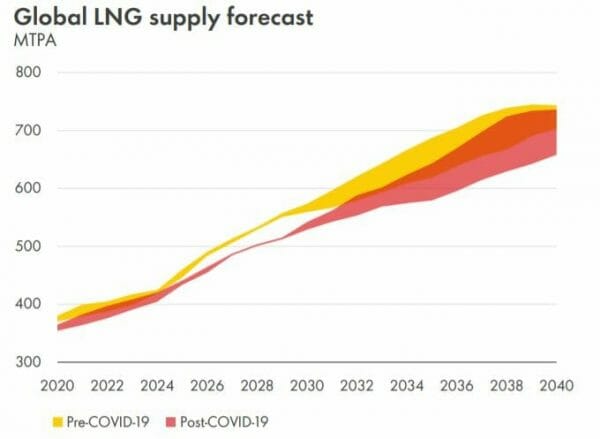 Global LNG demand has set new record highs for seven consecutive years. Growth rates decelerated during 2020 (as you might expect during a pandemic), but it speaks volumes that usage still grew even with the entire global economy locked down. And now activity is rapidly gearing back up.

We already covered the power generation angle. But did you know that there are 600,000 LNG-powered trucks and buses on the road in China? Or that the newest and largest cruise ships also run on LNG?

Each year, Shell publishes a comprehensive study of the LNG market. It’s about 30 pages of charts, graphs, and detailed analysis. I’ll save you the trouble and cut right to the good part. Global consumption is projected to double to 700 million tons by 2040. 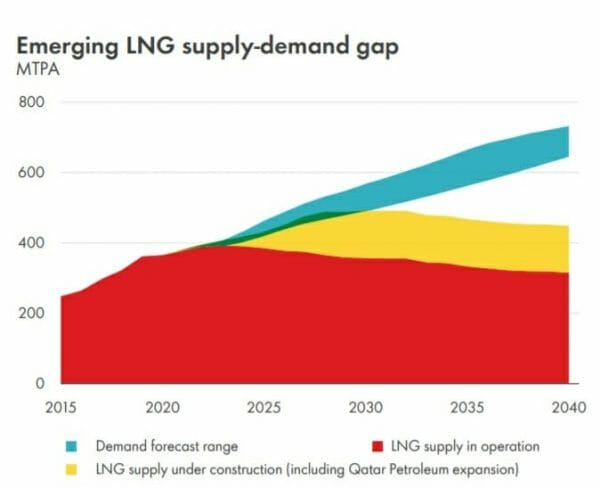 So here we have a classic case of supply/demand ripped straight from the headlines. Even better, there is a long runway for this theme to play out. But how will all those supplies travel from Australia to China or The US to Brazil? Answer that question, and you’ve discovered the rationale behind my newest portfolio addition over at High-Yield Investing.

Longtime readers know that I’m a fan of the shipping industry. I’ve written about the containership industry before, as well as a company that makes the containers for all those ships. Both are solid ideas that should bring us a steady stream of dividends and capital gains for years to come.

My latest recommendation takes a page right out of that playbook. But rather than containerships, this company is involved in getting all that LNG overseas. And it’s riding all of these powerful macro tailwinds into one of the market’s most generous dividend streams.

Since I just shared this pick with my premium readers, I have to keep this one under the hat, for now. In the meantime, I would encourage you to look into this space on your own. There are plenty of players involved in all the aspects of natural gas that are in a prime position to benefit for many years to come.

In the meantime, I strongly encourage you to check out my latest report…

It covers 5 of my absolute favorite “bulletproof” income payers for investors who want to build wealth in any kind of market. Each one of them has a proven ability to weather whatever the market throws at it… over the course of decades. And through it all, they reward investors with dividends that rise each year — on top of some serious price appreciation.

You won’t hear about these securities in the mainstream financial media. But with picks like this, you can sleep well at night and watch the income roll in year after year.