This weekend, I spent some time out on our family land. We hauled hay, vaccinated cows, filled troughs, among other things, as we look ahead toward the winter.

This is a critical time of year, as we prepare for inclement weather, making sure everything is in order before we take our next round of steers to be processed later this year.

We will be raising prices, by the way. But we won’t be slaughtering any bulls…

Which brings me to the state of the market. In case there was any remaining doubt, it looks like the bull market is back on.

But don’t just take my word for it… that’s according to one of our expert analysts. To discuss what’s going on, as well as what to expect the rest of this year, I had a chat with my colleague Jimmy Butts…

Jimmy, you’ve shared your favorite “breadth” indicator several times now. It warned of weakness before the market pulled back a couple of months ago. What does it say now?

You’re right, the market has shrugged off any notion of a correction that was lurking beneath the surface. It has now raced out to new all-time highs.

But the real question is, is it sustainable?

I’m sure you’re tired of hearing me talk about the AD Line by now, but it is confirming the trend. (I’ve discussed it here, here, and here.)

As a reminder, the AD line is what’s known as a breadth indicator. When the market is rallying, you want to see a large number of stocks that are reaching new highs. This means that the bull market is healthy, and it confirms the bullish trend. However, if the AD Line fails to keep pace with the underlying index, this is a sign of weakness. 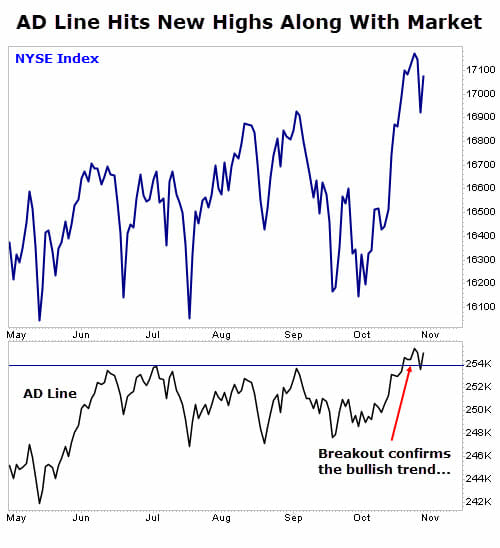 The AD Line has broken out to new highs along with the market. This tells me we should see a sustainable rally that should be carried through the remainder of the year.

When you first started warning of the market’s weakness, you changed your approach a bit. Any changes to how you’re responding now?

All the indicators I follow show that this bull trend is sustainable. So I’m prepared to step back into the market significantly. And over at my Maximum Profit premium service, I’m also moving my trailing stop losses back to 20%.

I’m a firm believer in having stop-losses for at least some of your holdings. It helps keep your emotions in check. When I first identified the weakness on August 19th, I decided to wait and see. But on September 30th, I tightened up our trailing stop loss to 15%.

Admittedly, I should have probably tightened up my stop losses earlier. Lesson learned. But for what it’s worth, when I first warned of weakness in the market (I of course didn’t nail the exact top), the major indexes peaked roughly two weeks later and all three saw pretty significant selloffs.

Although none officially hit “correction” territory, defined as a pullback of 10% or greater, the S&P 500 shed more than 5%, and the tech-heavy Nasdaq tumbled roughly 8%. The Dow Jones Industrial Average did top out on August 16 — the week I sent my first warning — and slid over 5% in the following month.

The S&P 500 is already up 21% YTD, but you’re saying there’s more where that came from. So what’s fueling the rally?

Looking at earnings, companies are reporting the third-highest (year-over-year) growth in earnings since Q3 2010. Earnings are growing at an average clip of 32.7%. 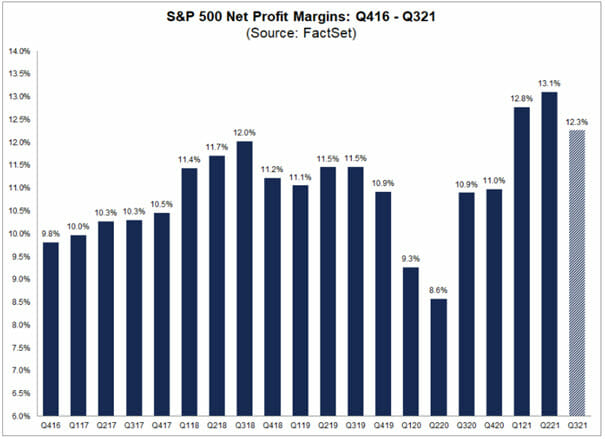 In short, sales are booming… Profits are rock solid… And margins are thick. What would you say to investors who are worried about the market’s valuation?

To answer that, let me just reiterate another point about the denominator of the P/E ratio – earnings. Analysts expect earnings growth of more than 20% for Q4 2021 and more than 40% for the full calendar year.

Right now, the S&P 500 is trading at a forward price-to-earnings (P/E) multiple of 21. That’s above its five-year average as well as its 10-year average. While that simple data point might scare some investors, I don’t believe the S&P 500 to be overvalued based on the current economic environment.

As the common saying goes, “money flows where it’s treated best.” Right now, money sitting in a savings account or in short-term bonds is probably costing you money. After all, the latest inflation numbers show an increase of 5.4% over the last 12 months.

Folks aren’t even earning 1% in savings, meaning any cash in savings has lost about 4.4% in purchasing power in the last year. Treasuries aren’t any better — a 10-year yields a paltry 1.5%.

While this may seem overly simplistic (and it sort of is), the bottom line is that investors aren’t getting rewarded enough to have money in savings and bonds. So, they’re putting that money to work elsewhere, like real estate (record housing prices), cryptocurrencies (recently hit new highs), and of course the stock market, which is also hitting new highs.

Again, that’s likely overly simplistic reasoning as a bullish thesis for the stock market, but sometimes we try and make things too complicated. Everything we’ve talked about so far gives me confidence. I’m not saying it will be a smooth line getting to new highs, but everything right now is telling me that new highs are in our future.

I’d like to thank Jimmy for joining me today. You’ll be hearing from Jimmy (and our other analysts) much more as we enter the final weeks of 2021. In the meantime, I want to tell you about an incredible opportunity that my colleague Dr. Stephen Leeb has recently identified…

We’ve profiled Dr. Leeb a few times — he’s the Chief Investment Strategist of The Complete Investor over at Investing Daily. And according to his research, every few years a series of obscure “profit waves” wash across the markets, handing investors a shot at massive fortunes… if you know where to look.

Dr. Leeb believes we’re on the cusp of one right now – and it could lead to a $128 trillion global economic windfall that’s poised to make early investors rich.

Go here to get the full story now.