Powell, Politics, Inflation… And A High-Yield Way To Protect (And Profit)

No big changes were expected. And that’s pretty much what we got. But we did glean some insight on when the Fed plans to formally begin winding down its asset purchasing program. 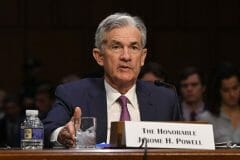 Here’s what the FOMC said in their official statement:

In light of the substantial further progress the economy has made toward the Committee’s goals since last December, the Committee decided to begin reducing the monthly pace of its net asset purchases by $10 billion for Treasury securities and $5 billion for agency mortgage-backed securities.

Remember, the central bank has been sinking $120 billion per month into mortgage-backed bonds and other securities to steady the economy during the pandemic, an emergency stimulus measure that many feel is no longer necessary.

The interesting thing about yesterday’s press conference is that Fed chief Jerome Powel had to share the spotlight, so to speak, as investors were also tuning into results from the previous night’s elections — which were dominating the cable news cycle.

The Political Picture Gets… Interesting

In case you missed it, Republican candidate Glenn Youngkin pulled off a stunning upset in the Virginia governor’s race, running up the score in rural counties and outperforming expectations in urban precincts (home to many Washington Beltway insiders) that have been deep blue for well over a decade.

While exit polling suggests that local issues (namely education) were central to the campaign, this election does have national implications. The crumbling support for democratic candidates, particularly among independent voters, has been widely viewed as a repudiation of President Biden’s policies.

More evidence: the gubernatorial race in New Jersey was officially a toss-up until just a couple of hours ago. And while the democratic incumbent eked out a win, this is a state where President Biden had a massive 16-point edge last year.

This matters to Wall Street because it comes at a time when both parties are wrestling over massive spending bills in Congress.

With the national mid-term elections looming, this could be a preview of what’s to come. For now, it’s safe to assume that moderates in congressional swing districts will likely think twice before putting their necks out to support social spending agendas.

I’ll be keeping an eye on the potential investment impact on this situation as it unfolds. The political picture – and the proposed spending measures in Congress – can affect everything from electric vehicle production to oil exports.

How To Invest Right Now…

As you may know, I’ve been weighing in on the inflation debate for a while. And I’ve also made the case for a boom in commodities for more than a year now.

I’ve got to say, I’ve never seen this many large American businesses complaining about the impact of inflationary pressures. Not just on raw materials, but also labor and transportation costs.

As I’ve said before, I’m not buying the notion that this is “transitory” either. Even Jerome Powell himself has conceded that the “effects have been larger and longer-lasting than anticipated.”

At this point, your definition of “transitory” doesn’t matter. What does matter is that raw materials and other inputs are getting more expensive. And companies are passing that rising cost along to shoppers like you and me whenever possible to maintain margins. It’s not complicated.

Commodities are proving to be a key beneficiary in this environment. I’m talking about industrial metals like copper and zinc… as well as lumber, grain, and other agricultural products. Even construction aggregates like cement. You name it.

I’ve talked about the crazy rally in natural gas this year. But did you know that corn prices have surged more than 50%?

BCX provides exposure to most of these natural resources, as well as others like iron ore. To get an idea of how business is faring, look no further than Glencore (OTC: GLNCY), one of the fund’s top holdings.

The global mining group (which produces 60 different commodities) has generated EBITDA of $8.7 billion over the past six months, setting a new record high. Operating cash flows have doubled. Pricing for the firm’s key commodity groups has climbed 40% from a year ago, on average – even more for copper and coal. And with a promising outlook, management has just authorized a $530 million special dividend distribution.

The market has responded, driving the stock up more than 100% over the past 12 months. 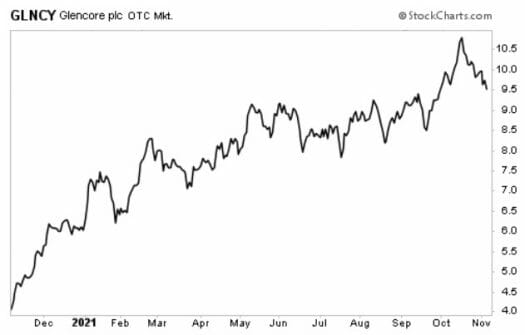 When discussing its bountiful profits, Glencore cited the “decarbonization” of the energy grid and transportation markets. That reinforces the core argument from when I talked about a “green wave” of spending leading to higher prices earlier this year.

If inflation continues to heat up (eroding the value of your dollars), then my advice is to keep at least a small portion of your investable assets in hard assets. And BCX is a good way for investors to gain exposure to the broader trend — while also earning a 5% dividend yield at current prices.

We’ve held BCX in our portfolio over at High-Yield Investing since February. And in this environment, investors are going to need a lot more picks like it. That’s where my latest report comes in…

It’s been tougher than ever for investors to find high income. But the opportunities are out there, if you know where to look… And in my report, you’ll find 5 “bulletproof” high-yield stocks that you can own for the long-term — picks that are so solid, they’ve weathered every dip and crash over the last 20 years and still handed out massive gains. Go here to learn more now.