In the late 1990s, the sport of golf experienced a popularity spike, which was dubbed the “Tiger effect”.

Sports fans will remember Tiger Woods’ 1996 PGA debut and the electrifying performances in the years to follow.

But golf peaked after the turn of the century. Since then, it’s been a long, slow downward spiral. Between 2003 and 2018, more than 6.8 million recreational golfers left the sport, a 22% decline. Over the same period, more than 1,200 golf courses shuttered their doors.

There are a few reasons you could chalk up to the sport’s downfall. One is just how expensive it can be. After all, clubs, golf balls (which are routinely lost), and green fees quickly add up.

Then there’s the… optics. The sport has long been perceived as an “elitist” pursuit, an old white man’s sport, and that certainly didn’t help draw in new younger players.

Then, of course, pundits also blamed the Millennial generation’s lack of interest as a key driver of its demise. In 2016, Business Insider even published a story called “Millennials are Killing Golf.”

But if we’ve learned anything about the Millennial generation, it’s this: They are on their own timeline.

What Investors Are Missing With The Millennial Generation

Now, it’s pretty normal for older generations to criticize the younger crowd. But millennials are coming into the spotlight more, and for good reason. Millennials (those born between 1981 and 1996) are now the largest generation in the United States, checking in at more than 72 million strong. 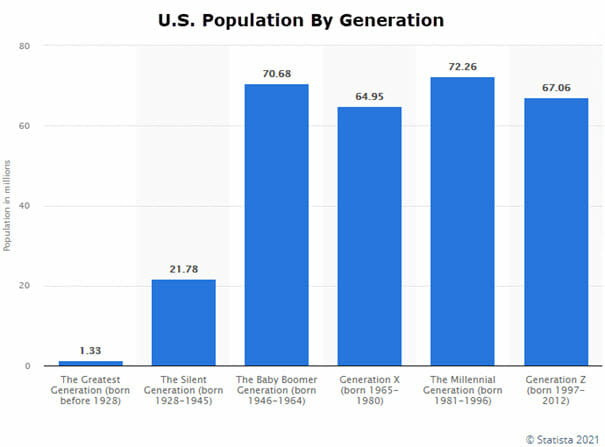 Just look at Harley-Davidson (NYSE: HOG) as a prime example. As boomers moved closer to retirement and their children were beginning to leave the house, Harley-Davidson made a bet that the boomers wanted to relive their glory days, so the company revived the look and feel of the original Harley-Davidson.

The bet paid off nicely. Starting in 1996 the motorcycle company posted double-digit sales growth. That was the year the first boomer turned 50. Over the next seven years, HOG continued to grow sales at a double-digit annual clip, and shareholders who recognized this trend early on made a killing. 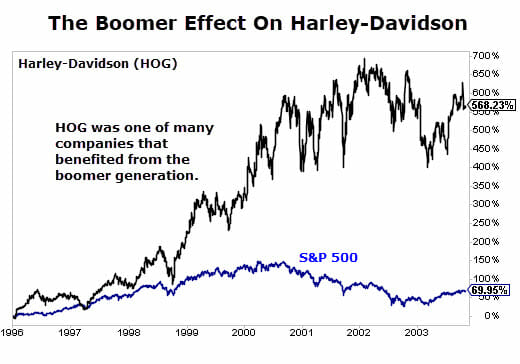 I wrote about this “Boomer Effect” in my premium Top Stock Advisor service back in 2016. I cited example after example showing how if you simply followed the boomer’s buying habits as they moved through life, you could have done very well for yourself.

The boomers provided this blueprint that we can use for today’s largest generation: the Millennials.

Longtime readers might recall that part of my thesis behind recreational vehicle (RV) manufacturer Thor Industries (NYSE: THO) in 2019 was the Millennial generation.

Here’s what I said about the Millennial generation in that piece:

Most investors are overlooking another buying group that’s helped propel the (RV) industry to new heights: The Millennial generation. The Millennials have bucked the traditional trends of staying at one job for long periods of time. They’re not getting married and having kids as young as previous generations, and they’re not buying homes (yet). They’re known more for craving “experiences” over material things.

And even though shares of Thor Industries got crushed during the Covid-19 market crash, they quickly recovered and soared to new heights. We closed out of the position in 13 months, locking in a 74% return, crushing the S&P 500’s performance over the same time. 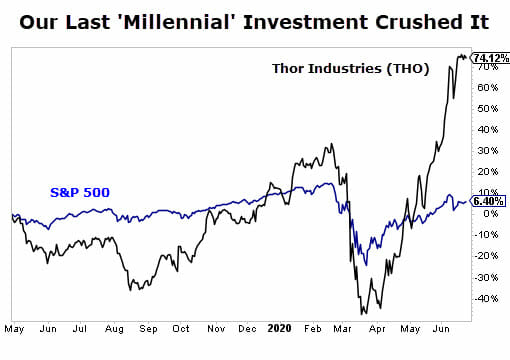 This reinforces my belief that we’ve got a similar megatrend on our hands with the Millennial generation.

Remember what I said about millennials having their own timeline? Well, now they are snagging up homes at record rates, starting families, and beginning to turn their attention to one of America’s favorite pastimes: golf.

As I mentioned, 2016 was the bottom for the golf industry. And while it’s been a slow turnaround (meaning we haven’t missed the boat), the sport is in the midst of another renaissance.

The National Golf Foundation’s annual study of golf participation in the United States tells the story. It found that 36% of the nearly 24 million golfers in the United States are young adults aged 18 to 39, and over 15 million additional millennials expressed interest in taking up the game.

Golf courses aren’t the only ones happy to see the increase in participation. Retailers are also seeing their golf segments improve.

Dick’s Sporting Goods (NYSE: DKS) said they’ve seen consistent growth in its golf business, and it has become one of its growth drivers in recent quarters.

Under Armour (NYSE: UAA), which reported blowout earnings on November 2, pointed towards its golf division as a key driver of sales growth.

Another trend helping boost the interest in golf is the ability to enjoy the game without hitting a round of 18. That’s thanks in large part to a company called Topgolf, which offers a gamified driving range experience with food and drinks.

I’m a huge fan of Topgolf, but that’s a story for another time. The point is, between Topgolf, indoor golf, and traditional driving ranges, another 12.1 million people enjoyed the game last year. This is huge for the sport of golf.

It’s also huge for the stocks I mentioned above — as well as the pick I just recently shared with my Top Stock Advisor readers.

In the meantime, be sure to pay attention to the Millennial demographic… what they want, what they buy, and what their interests are. If history is any guide, the profits will soon follow.

Another thing Millennials (and everyone else) is excited about is the new billionaire space race — and you should be, too…

Richard Branson, Jeff Bezos, Elon Musk, and a host of other players are in a furious competition to see who will take the top spot in space. And we’re talking about much more than just tourism. We think Elon Musk is in the lead right now, thanks to his latest brainchild: Starlink.

My latest report tells readers all about this secretive project and what it could mean for the future of space (and life here on earth). And even though Starlink is “off limits” to regular investors, we’ve uncovered a “silent partner” that gets you in on the ground floor…