Back in August, I wrote about something I’ve been telling investors for years. It’s an idea that sounds so simple on the face of it, yet most people fail to put it into practice.

We all know about the big-name stocks that seem to deliver market-beating returns year after year. I’m talking about stocks like Amazon, Facebook, Google parent Alphabet… I’m sure there are a few other names we could add to this list that you could think of.

These are all names that any long-term investor should be proud to have in their portfolio. They’re practically “no-brainers”. Here’s what I said about this idea back then:

I’m also a big fan of the “no-brainer” play. Said another way, our core mission is a lot like Buffett’s — to find wonderful businesses trading at fair prices.

Don’t get me wrong, we still take our fair share of shots on “big upside” plays over at Top Stock Advisor. But you need to have this part of your portfolio locked in first. And the best part about it? Stocks like this can still end up doing quite well for you over the long run.

Sounds pretty simple, right? But as I explained back then, the problem is that most investors don’t actually invest in these well-known names.

Unfortunately, in my experience, most individual investors tend to shy away from these names. Part of the reason seems to be that people feel like they’re too “obvious” or “easy”. I get it… When we bought these two stocks, I have to admit, part of me felt like we had already missed the boat. But as I constantly tell my Top Stock Advisor readers, our bread and butter is finding wonderful companies trading at fair prices.

The two stocks I was referring to are none other than Facebook (NYSE: FB) (now known as Meta Platforms) and Google parent Alphabet (. And as I explained back then, when we did buy into these names, it’s worked out wonderfully for us.

Facebook is up 176% since adding it to our portfolio, while Alphabet is up 156%. And both have done nothing but crush the market since then… 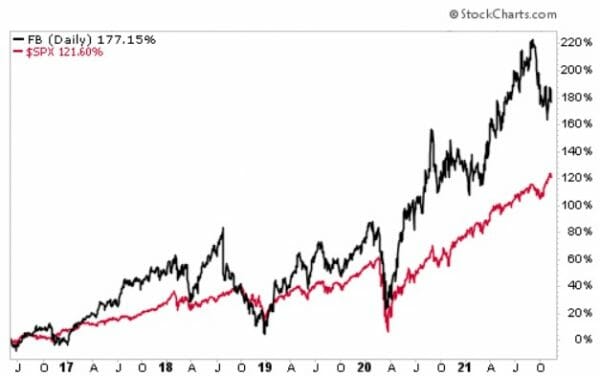 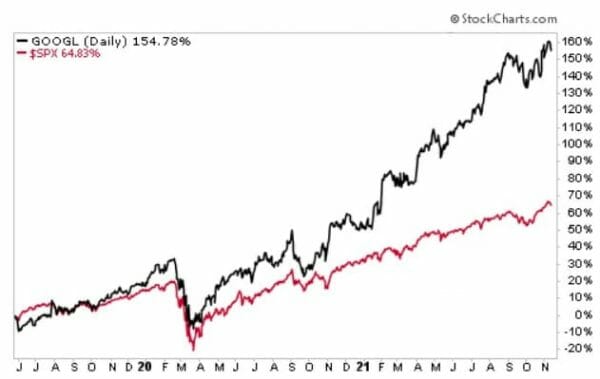 Now here’s the good news. I believe investors still have the chance to make good money with these stocks today. But don’t just take my word for it… We just got further evidence that at least one of these stocks is still firing on all cylinders.

The financial highlights from Alphabet’s most recent quarter are just flat-out impressive.

It continues to rake in sales at an impressive rate. It pulled in $65.1 billion in sales for the quarter, a 41% year-over-year increase, and topped estimates by a cool $1.6 billion.

These numbers are extremely remarkable. Keep in mind that Alphabet is a nearly $2 trillion company, so it takes a lot to really move the needle. Yet, here it is still growing sales at 40%…

Here’s another thing you may not have thought about. Everyone talks about Google’s search advertising revenue, and rightfully so. But when I originally recommended Alphabet in May 2019, I told my subscribers about how YouTube (owned by Alphabet) was the most-watched video platform ever, handily beating out Netflix or any other streaming service.

I’m willing to bet most people wouldn’t have guessed that. But Google’s acquisition of YouTube just might go down as one of the smartest acquisitions in history.

Here’s what I said about YouTube in that issue:

Users watch 1.3 billion hours of YouTube videos every day. That’s nine times more than the 140 million hours per day that Netflix reported last year. Netflix hardly holds a candle to YouTube. And the best part is that YouTube doesn’t have to burn through billions in cash for its content. For the most part, it receives its content for free (it does share in advertising revenue and subscriptions).

Well, when Alphabet reported quarterly earnings on October 26, we found out that YouTube had surpassed $3 billion in consumer spending on iOS (Apple’s operating system). This is only behind Tinder and Netflix.

This is a significant milestone and tells us that consumers value the content and experience YouTube provides by shelling out cash to pay for a more premium version of that mobile-friendly content.

Alphabet continues to impress and should continue outpacing the market. We are up 156% on our investment, compared with the S&P 500’s 65% return over the same period.

Again, I know most people want to hear about some unknown growth stock that could deliver triple-digit gains over the long term. And don’t get me wrong, we certainly do our fair share of coverage on this over at Top Stock Advisor.

But do yourself a favor. If you don’t own a dominating company like Alphabet (or one of the other usual suspects), then ask yourself… why not? If you find a household name like this that’s trading at a reasonable price, then you’d be foolish not to.

In the meantime, I recently found something that you should take a look at…

I regularly read through SEC filings, and it’s normally pretty tedious work. But I found something in a tiny footnote of one company’s report that leaped off the page. And suddenly, I was once again reminded why this is all worth it.

I’ve got all the details in my latest report. But what I can tell you right now is that it has to do with a little-known satellite technology company that may have scored the deal of the decade.

Go here to get the details right now…