The investment world is a tricky place. Sure, we all know about the high-quality names, like Apple, Microsoft, and others. But the market is littered with poor companies, poor management, and even outright fraudulent companies.

Sometimes distinguishing between the cream of the crop and the garbage can be more challenging than it seems.

Remember Enron? It is one of the most famous companies that lost investors all their money. Ironically, it was named “America’s Most Innovative Company” by Fortune Magazine every year from 1996 to 2001 (the year it went bankrupt).

It turns out that the real “innovation” taking place inside the company was in their accounting department. For years, they innovated techniques to overinflate their profitability and hide losses. 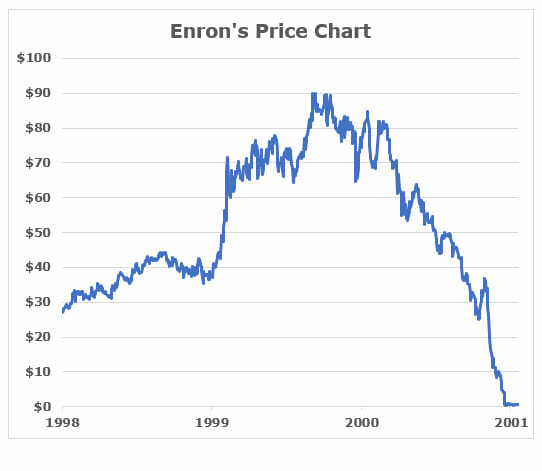 But it’s not just bad accounting tricks you have to worry about. There are deceptive claims about company products or sales, or lawsuits that investors have to navigate. Another popular investment ploy is the Ponzi scheme.

Made famous by Charles Ponzi in the early 1920s, a Ponzi scheme is where a swindler pays out high returns with other investors’ money. Bernie Madoff orchestrated the largest Ponzi scheme in history at over $64 billion, before finally getting caught in late 2008.

One might think that investors would be able to spot a Ponzi scheme in today’s world, or that after the fall of Madoff, Ponzi schemes would be on the decline. But they aren’t… In fact, just recently, a man named Jeff Carpoff was convicted of running a $1 billion Ponzi scheme.

Perhaps, more surprising was that he swindled arguably the world’s greatest investor, Warren Buffett, out of $340 million.

Carpoff co-founded DC Solar, a California-based solar company that built mobile solar generators for sporting events and music festivals. But it turned out that the company fibbed on the actual number of mobile units it had, and instead used money from new investors to pay off old ones.

Carpoff was sentenced to 30 years in prison.

[Related: 4 Buffett Strategies To Be A Better Long-Term Investor]

It may sound surprising, but this type of thing can happen even to the best of us. But why?

Well, without getting into the particulars of Buffett’s situation, I’d say a big reason why investors continue to get bilked out of millions of dollars is that the illusion of big profits clouds our judgment.

As I talk about frequently, one of the biggest obstacles for investors to achieve success is controlling their emotions. We let small losses dwarf into big ones, as we hope for the day it returns to our original price just so we can break even. We sometimes cut winners short, or worse, watch big gains evaporate as we get fixated on price anchoring — which is a price point we become fixated on.

[Read more: How ‘Loss Aversion’ Can Cripple Your Portfolio – And What To Do About It…]

For instance, a stock might make a run from $50 a share to $100. But then as it slides back down, we tell ourselves that once it gets back to $100, we’ll sell. Instead, shares continue to drift lower, and all the gains disappear.

It’s a natural tendency for us to be attracted to claims of massive returns and outsized profits. We’re like bugs to a light. But before you get too close, you must take a step back and think critically. Is this too good to be true?

In the investment world, there’s a common mantra for this emotional greed… bulls and bears make money, and pigs get slaughtered.

This is a big reason why I’m a huge fan of having a system in place. It doesn’t have to be a system like what we use over at my Maximum Profit premium service, necessarily. Just some sort of system or plan in place to help control the emotions that will inevitably pop up along our trading journey.

It’s also why I’m such a fan of using cash flow as a tool for evaluating a potential investment. I’ve been telling my readers for years that it’s my absolute favorite fundamental metric.

Many investors are already familiar with cash flow. But they may not realize how important it is…

It’s one of the toughest numbers to fake, fudge, or fib on a financial statement. All other figures that a company reports, well, that’s a different story.

A company can inflate its earnings… report fictitious revenue… the list goes on. But they can’t fudge cash flow. Simply put, cash flow is the actual cold hard cash a company receives for its products or services. It is the lifeblood of any business.

Let’s look at another infamous example, to see what I mean. It shows just how dangerous it can be to ignore cash flow… 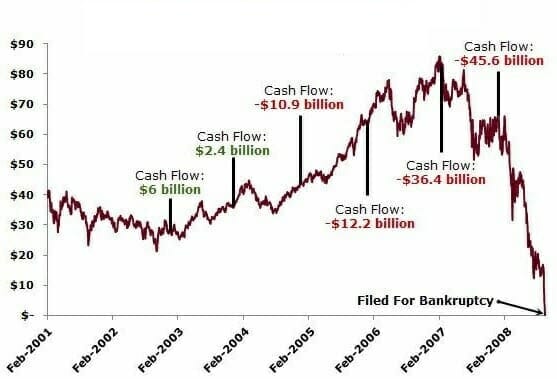 This chart belongs to none other than Lehman Brothers, and it shows what was going on right up to the point of the financial crisis. In the years leading up to the company’s collapse, the cash flow shriveled to zero and went into the negative.

This alone was a huge red flag to any investor owning shares over that period.

The one thing Lehman Brothers and each of the other companies I mentioned have in common is this… If you had just looked at revenue, earnings, P/E ratios, etc. — you would have missed out on the full picture.

Look, we all want to believe that the people behind a company have good intentions. Sometimes they do and sometimes they don’t. But as the saying goes: trust, but verify. A company can manipulate earnings, downplay expenses… they can do all sorts of things that lead investors astray. But the one thing they can’t do is fudge their cash flow figures: the actual money they are bringing in.

It’s the one thing that can tip you off when something isn’t what it seems. And it’s one piece of data every company generates that you can accurately rely on.

Knowing we can use this information to avoid losses is comforting. It greatly cuts unnecessary investment risk. But on the flip side, it can also lead you to some big winners, too.

Bottom line, if you aren’t paying attention to a company’s cash flow, it’s time to start.

Editor’s Note: I recently found something buried deep in a company’s SEC filing that you should take a look at…

I spend a lot of my time digging through company financials, analyzing data, and researching big ideas… But I found something in a tiny footnote of one company’s report that leaped off the page.

It all has to do with a little-known satellite technology company that may have scored the deal of the decade. And thanks to this find, we have the chance to get in ahead of the crowd.

I’ve got all the details in my latest report. Go here learn more now…