Is This Recent IPO The Next Tesla? Here’s What You Should Know…

Move over, Tesla. There’s a new game in town – and it just went public.

Say hello to Rivian (Nasdaq: RIVN) – an electric vehicle company that made its debut on the exchanges last week. The company raised $11.9 billion in its IPO, making it one of the most successful public offerings in years.

As of right now, Rivian market capitalization is $109 billion. That makes it the third-most valuable car company in the world. Ford’s market cap is $79 billion, and GM’s is $93 billion, for context. (Ford has a 12% stake in Rivian, by the way.)

Oh yeah, and its only delivered about 150 vehicles, with about 55,400 preorders, as of last week.

Car enthusiasts may have had their fist introduction to Rivian by watching a show called Long Way Up on Apple TV Plus. The show is a continuation of a series featuring Hollywood actor Ewan McGregor and best friend Charlie Borman as they trek around the world on motorcycles, along with a film crew documenting their every move.

In this installment, the two friends make the journey from the southern tip of South America to all the way up to Los Angeles (get it? Long way up…). Only this time, there’s a twist.

This time, the two friends take a pair of customized prototype electric motorbikes, courtesy of Harley Davidson. And for the support vehicles, the film crew uses trucks provided by Rivian. The company also set up charging stations at 140 locations along the route.

It was a PR coup for Rivian, to say the least. So what exactly is Rivian all about?

A Look Inside The Hottest EV Company On The Planet

Founded in 2009 by MIT engineer Robert “RJ” Scaringe, the company’s primary focus is to develop and manufacture autonomous electric vehicles catering to the “adventure”-minded driver, as well as commercial vans for urban markets.

For the adventure driver, Rivian has developed two vehicles, the R1T truck and R1S SUV. Production was delayed due to Covid, but the R1T began deliveries in October. The commercial van is currently being developed for Amazon (which has a 20% stake in the company), and it reportedly has an order for 100,000 vehicles. 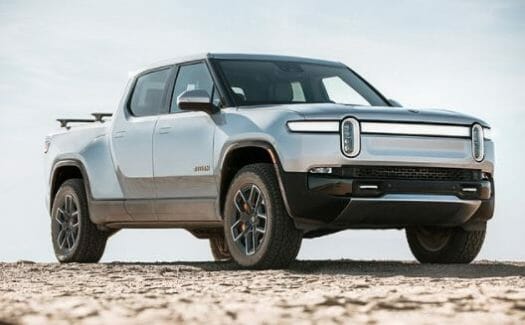 Underpinning Rivian’s vehicles is some pretty impressive technology. I won’t bore you with all the details, but one of the real innovations here is the company’s “skateboard” platform, which features two dual-motor units mounted on each axle. As this piece from Autoevolution highlights, it is “capable of delivering power instantly and independently, giving the vehicles precise traction in any condition while providing significantly better torque control than conventional locking differentials.”

Translation: incredible torque, badass off-road capability, and the ability to build out Rivian’s vehicles all on the same platform. And aside from that, Rivian’s trucks have all of the luxury and tech gadgets you could think of (and a few you won’t expect).

Back when Ford debuted its electric truck in May, I told you that competition was going to heat up for the likes of Tesla (Nasdaq: TSLA). And while there’s plenty to go around, it was going to be a game-changer for the major automakers. Since then, shares of Ford are up 58%.

But Rivian will have a long, tough hill to climb in order to reach viability. So I wouldn’t touch this stock just yet. We’ll need to see much more from the company to demonstrate that it’s a viable, investible, going concern. You know, things like orders, revenue, customers, etc…

Those are all coming, of course. Rivian is smart for sticking to trucks and fleet vans right now. The three most popular vehicles in the U.S. are all pickup trucks. And large companies are facing increasing pressure to de-carbonize their fleets. Plus, I have to say, I think the R1T is the most compelling electric pickup truck that I’ve seen so far.

But I don’t yet know whether Rivian will get there. It’s entirely possible that it does, and even gives Tesla and the other auto giants a run for their money. After all, some very smart people (like Jeff Bezos, for example) clearly see the potential.

In the meantime, this is going to be one volatile stock, to say the least. As I write this, shares are already down by more than 30% from their highs near $179. Besides, because of how IPOs work, the odds are just not in your favor for the first several months. (My colleague Jimmy Butts has an excellent piece discussing the mechanics of IPOs and why most individual investors end up losing. You can read that here.)

In my view, Rivian is not an investible stock — not yet, anyway. But what I do know is that in the meantime, EVs are becoming more and more commonplace. And investors would be wise to pay attention to this space and look for ways to profit…

Rather than trying to pick the winners, we can play the growing EV trend by investing in the materials critical to making them.

I’m talking about lithium. The silver-white metal is crucial for a variety of industrial applications. The biggest growth driver for lithium is the demand for lithium-ion batteries used in EVs. Some pundits refer to lithium as “the new gasoline.” Renewable energy also requires a massive amount of lithium.

However, demand for lithium is outstripping supply, which is great news for the companies that mine and process the metal. For details about America’s number one lithium play, click here now.