We all know we live in an era of trillion-dollar deficits and inflationary Fed policies. The trouble is what to do about it…

Well, there is nothing more reassuring than durable hard assets that hold their value.

This is the part where most people would think of gold. And while gold has its luster, its real utility is rather limited. More importantly, it doesn’t have any earnings power. That’s why many of the world’s richest and brightest businessman are sinking more and more of their wealth into real estate.

The Preferred Asset Class Of The Wealthy

Property is a timeless investment. They’re not exactly making any more land, yet the world’s population is growing by 200,000 people (births minus deaths) each day. That’s over a million new people a week crowding into a fixed amount of space to live, work and shop — placing upward rental pressure on housing, office parks and retail strip centers.

But don’t just take my word for it. Here’s what some of history’s wealthiest business tycoons had to say.

Ninety percent of all millionaires become so through owning real estate. More money has been made in real estate than in all industrial investments combined. – Andrew Carnegie

Real estate cannot be lost or stolen, nor can it be carried away. Purchased with common sense, paid for in full, and managed with reasonable care, it is about the safest investment in the world. – Franklin D. Roosevelt

Forward-looking investors are putting their money where their mouths are, placing huge bets on land and buildings. Warren Buffett, for one, has strongly endorsed rental homes, and his Berkshire Hathaway company recently invested $377 million in a commercial property owner.

Billionaire media mogul Ted Turner owns more than a dozen sprawling ranches from Oklahoma to Montana. This collection spans 2 million acres (an area more than twice the size of Rhode Island), making him one of the nation’s largest private landowners.

Aside from generating stable monthly income, real estate can also be a great way to protect against the erosive impact of inflation and a depreciating dollar. Furthermore, its low correlation to equities can provide some buoyancy when the economy deteriorates and stocks are sinking.

Unfortunately, most of us don’t have the bankroll to buy an office tower, an apartment complex or a retail shopping center. But real estate investment trusts (REITs) offer a great way for investors of any means to participate.

If you’ve ever bought and sold a house, then you understand that most properties appreciate in value over time. In fact, REITs have been one of the best-performing asset classes for decades. In fact, the FTSE Nareit All Equity REIT Index has delivered an average annualized total return of 10.5% over the past 25 years. 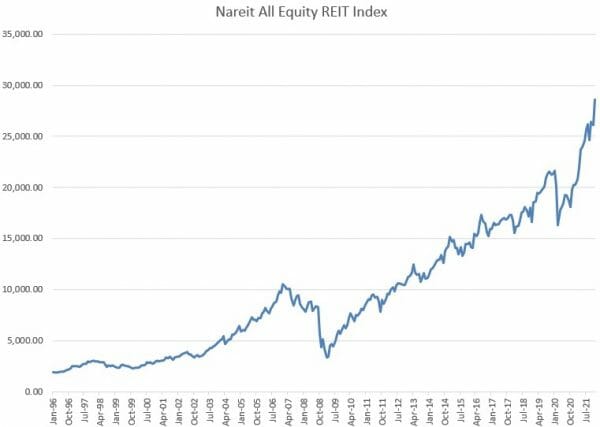 As nice as that is, the primary appeal of these securities is their income-producing potential. And there’s a kicker. Real estate trusts are exempt from federal income taxes, provided they distribute at least 90% of their taxable income to stockholders.

That special perk helps explain why the average REIT offers an annual dividend yield of about 3%, double the market norm. (But if that doesn’t excite you, don’t worry — there are plenty of solid REITs that offer even more…)

Those dividends aren’t exposed to disruptive influences that other businesses must deal with… such as spiking raw material costs or changing consumer fads. While companies like General Electric and toymaker Mattel have been forced to cut their dividends, most REITs maintain stable (or rising) distributions.

There are a few caveats to consider, and they’re worth discussing.

Since REITs don’t pay corporate income tax, most of the dividends paid to shareholders are fully taxed as ordinary income. In other words, most REIT dividends don’t qualify for the reduced 15% dividend tax rate. Of course, investors can avoid taxes on these distributions entirely by holding REITs in a tax-advantaged account like a Roth IRA.

Furthermore, because they distribute most of their profits and retain little, these companies must frequently tap the capital markets to raise funding to grow their portfolios. A popular and cost-effective method to raise capital is through secondary offerings — selling additional shares of stock to the market. This typically weakens the price of existing shares (at least temporarily) and waters down earnings on a per-share basis.

Landlords in certain segments of the real estate world (mainly retail) struggled to collect the full rent due on their properties with many tenants shut down (or operating at reduced capacity) because of the pandemic. But as the pandemic (and shutdowns) began to subside, there were sharp improvements in the ensuing months — and some were barely affected at all.

[Read More: What You Need To Know About REITs]

Many of you know that I’ve sang the praises of real estate before. But it’s worth repeating: this is a powerful asset class that absolutely deserves a place in your portfolio.

Overall, this asset class has been one of the best places to park your money over the long-haul. Between dividends and share price appreciation, REITs have been one of the market’s best performing asset classes over the past couple decades. Despite some temporary setbacks (so some, but not all REITs), that streak was alive and well through 2021 — and I see no reason why that shouldn’t be the case in 2022 and beyond.

After carefully screening and evaluating hundreds of REITs, including those that are already in our own High-Yield Investing portfolio, I’ve identified three that deserve special consideration. I talk about each of these in a brand-new report that comes as a special extra bonus for readers who are interested in leaning about High-Yield Investing and what we’re about.

If you’re looking to gain exposure to one of the best-performing asset classes of the past couple decades, I can’t think of a better place to start your search. To learn how to get this report, go here now.