Our Expert Weighs In On What’s Next For Tech, How To Handle Rising Rates, And More…

If you watched closely enough, Wednesday and Thursday were some of the most insane days in terms of price movement for individual stocks since the whole “meme” stock thing happened in 2020.

Yet this time, instead of a rogue group of traders on Reddit causing the shenanigans, it was earnings season.

To put it simply, a number of big factors are causing some incredibly volatile action in some big firms as they report fourth-quarter results.

Those results (and the bonkers-level price action) have been a mixed bag: some good and some bad. Let’s start with one example of the bad…

Meta Platforms (Nasdaq: FB) – formerly known as Facebook – plunged by about 25% on Wednesday. The company missed analyst targets on both earnings and revenue. It also reported the first drop in total users in the company’s history. Oh, and the new Apple privacy changes will cost the company about $10 billion this year.

Did I mention that they also issued guidance that fell short of analyst expectations?

All told, the carnage amounted to a $230 billion loss in market cap. That’s never happened before. Seeing as how FB’s weight in the S&P 500 is about 2%, that was enough to shake the broader market considerably on Wednesday.

On the other side of the coin, on Thursday Amazon (Nasdaq: AMZN) crushed analyst estimates in its fourth-quarter report, posting revenue of $137.4 billion and earnings per share (EPS) of $5.80, respectively. Analysts were looking for revenue of $137.6 billion (a slight miss) and EPS of $3.57 per share.

Among other highlights: Amazon’s cloud computing division (AWS) grew revenue by 40%, and the company will be hiking the price of Amazon Prime from $119 to $139 annually.

That sent shares of AMZN higher by 14% in extended trading on Thursday. Remember, this is a $1.5 trillion company we’re talking about.

We may do a deeper dive into the results from Meta or Amazon at another time. But the point is this…

I could give you several other Jekyll and Hyde-like comparisons of companies, particularly in the tech space, that are pretty shocking from the past week.

The bigger question, for now, is whether the volatility continues… And how should we handle a rising-rate environment? For answers to these questions, and more, I turned to my colleague Jimmy Butts, Chief Investment Strategist of Top Stock Advisor…

Jimmy, when we last spoke before the New Year, you said you were worried about a selloff fueled by the tech sector – and you were spot on. Is the damage done, or do you still think we’ll see more pain ahead?

I hate to say this, but no, I don’t think we’ve seen the end of it. I think there’s more downside ahead. Many of the Big Tech names are still overvalued. While they experienced massive tailwinds during the pandemic, a lot of them are still trading at levels that are hard to justify, at least from a historical perspective.

Keep in mind that I hold onto this belief rather loosely. I know that I can’t predict what the market will do tomorrow, next week, or next month any better than the next guy.

But as you said in your intro, there are winners and losers.

You already mentioned Amazon, so let me throw out one more positive example: Google parent Alphabet (Nasdaq: GOOGL) is a rare example of a big tech firm that’s delivering major growth and trading at a reasonable price (22 times next year’s earnings, which is below its five-year average).

But on the whole, things are still just a little too rich in this part of the market.

Can you explain the connection between interest rates and why that’s affecting Big Tech?

Let’s go back to the idea of risk. It’s always being assessed and discounted in the market.

Interest rates and time are the two main factors when thinking about this. You may not think of it right away, at least not consciously, but I assure you that the pros do.

Think of it as a spectrum…

If interest rates are low, that means the rate of return we’re going to be getting on “safer” assets like CDs and Treasury bills is going to be pretty low. To make up for this, a lot of investors are forced to take on a little more risk than they’d normally be comfortable with.

The opposite is true when rates are rising. That means a lot of people who might have been uncomfortable in riskier places like the stock market will start to look for safer alternatives. If we zoom in on the market itself, that means risk-averse investors might prefer to shift from tech into other places (like blue-chip dividend payers, for example).

What areas of the market could benefit from rising interest rates?

Well, the first things that come to mind are banks and insurance companies.

If rates hike by even a quarter-point, that means banks can earn a larger spread on what they pay compared to the rates at which they lend. That should provide a meaningful boost to profits.

Our colleague Nathan Slaughter made a good case for smaller regional banks in this piece. I think this is a good idea, because they should arguably have even more upside potential than the big boys like Chase or BofA.

Can you explain the appeal of insurance companies? I know you don’t like to brag, but one of your biggest current winners in the Top Stock Advisor is none other than an insurance stock…

We all know how this business works from the consumer side. But let’s break it down…

We pay them, and then we hope nothing bad happens. To the insurance company, this is called “float”. If something does happen, they pay your claim. A few companies are good enough to generate what’s known as an underwriting profit, meaning they collect more premiums than they pay out in claims.

Regardless, before a claim is paid, the insurance company is free to invest this cash however they please in the meantime. So once again, a small uptick in rates means they can earn that much more from their “float” before they have to pay out claims.

Now, at an $11 billion market cap, AFG may not be as well-known as some of the larger insurance companies out there. But it’s been absolutely crushing it in terms of operating performance.

Thanks in part to this, they also make a habit of paying irregular special dividends. We’ve recouped more than half our initial purchase price in dividends alone. Not to mention the stock has been on a roll… 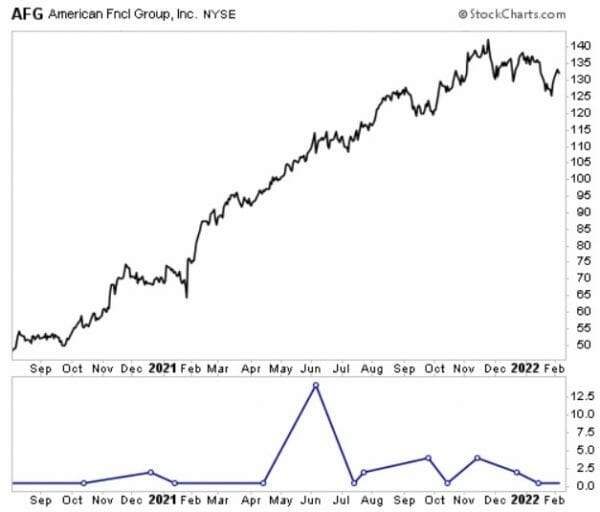 Right now, we’re sitting on a total return of 175%. And since a rising rate environment will be even better for companies like AFG, I expect to see more gains in the future.

It may even go down as one of the biggest gains we’ve ever made in the history of Top Stock Advisor. All from a “boring” little insurance stock…

That’s all we have for today, but I want to remind you that Jimmy and his team have just released their market predictions for the coming year…

Fair warning: These predictions are the most controversial market calls we publish all year. They often challenge conventional wisdom, and some of them may even shock you…

But they’re also the most hotly anticipated thing we do all year, with past predictions handing investors a shot at raking in 622%, 823% and even 1,168% gains. And this year could be our most profitable yet…

Discover all 7 of our investment predictions NOW.