After falling from grace, shares of the interactive fitness equipment maker Peloton (Nasdaq: PTON) have been soaring. The stock opened nearly 30% higher on Monday, rebounding back above $30 on extremely heavy trading volume.

This powerful rally was triggered by a Wall Street Journal report over the weekend indicating that the fitness equipment maker has attracted several interested suitors, most notably Amazon.

And on Tuesday, shares once again soared on the news that CEO John Foley is stepping down to make way for a new boss, Barry McCarthy, former CFO of Spotify. According to Yahoo Finance, the move sets up a clear mission for McCarthy: clean up the financials and shop the company to potential buyers — ideally at a significantly higher valuation. 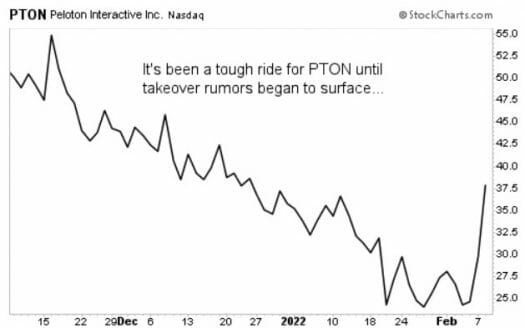 But before we get into that, we should discuss what makes a company like Peloton an appealing target. Let’s start with Amazon…

Why Big Tech Is Interested In “Connected Fitness” (And PTON)

The e-commerce giant certainly has an active interest in the connected fitness market, having already developed its own wearable wellness tracking device (Amazon Halo) to compete with Google’s Fitbit. Strategically, Amazon could help alleviate the supply chain and distribution woes that have plagued Peloton at times, while also mining a treasure trove of user data on its affluent customer base.

There has been speculation that Amazon may even bundle Peloton subscriptions (which include live workout classes and other content) into the popular Prime membership program. Since the news broke, several other financial media outlets have weighed in on the possibility of a Peloton takeover: Bloomberg, Reuters, Barron’s, Business Insider, and Investor’s Business Daily, just to name a few.

While there is no deal on the table (at least not yet), this is far more than just idle speculation. Inside sources say that Amazon has already spoken with independent advisors as well as Peloton executives.

And Amazon isn’t the only potential acquirer.

Nike, for one, has reportedly expressed interest. There is also some conjecture that Apple (Nasdaq: AAPL) may throw its hat in the ring. At least one analyst has referred to that potential merger as a “major strategic coup” in the fight for health-conscious consumers. Apple is banking heavily on this niche and has seen strong adoption for its monthly fitness subscription service.

Winning Peloton would add another 3 million subscribers and open up all kinds of cross-selling pathways. More importantly, it would keep this growing business and its technology out of the hands of bitter rivals.

I still see Facebook parent Meta Platforms (Nasdaq: FB) as a logical acquirer as well. Meta has staked its very future on the metaverse – an interactive virtual world where people can play, work, and yes, exercise. It’s no coincidence that Mark Zuckerberg acquired Beat Saber (one of the most popular VR workout applications) in 2019.

Setting The Table For A Takeover

All of this sets the stage for a potential bidding war.

Any offer would have to first meet the approval of former CEO John Foley and other insiders, who control more than 50% of the stock’s voting rights. But then again, there is an activist shareholder group trying to oust current leadership and gain representation on the board.

It’s been a bumpy road for Peloton lately, but any post-lockdown deceleration in demand has more than been priced into the stock. This business commanded a $50 billion valuation last year. Friday, it was priced at just $8 billion.

As I write this, we’re back up to $13 billion. And if reports are accurate about McCarthy’s new mandate, the goal won’t be to simply settle for any offer it gets, which means there could still be upside ahead for investors.

Here’s how crazy the ride has been… PTON actually slipped below its IPO price last month, despite accumulating a user base that is 289% larger than before Covid struck. I saw that disconnect as a compelling buying opportunity over at my premium Takeover Trader service – and others seem to agree.

Our timing wasn’t perfect on this one, to be sure. But it’s become abundantly clear that this is an ideal time for opportunistic acquirers to pounce. For what it’s worth, some analysts were pinning a potential deal in the $12 billion to $15 billion neighborhood. But now that we’re already in that neighborhood, it’s likely that McCarthy, Foley, and other insiders will shoot for even higher.

That means there will be some work to do in order to make the company even more appealing to a buyer. So there will likely be some layoffs and restructuring that needs to take place first. (Reports indicate the company is shooting for $800 million in annual cost savings.)

Now, if a deal doesn’t materialize, then these gains could unravel quickly. There will likely be some profit-taking as the initial adrenaline wears off off. But there are sound reasons why Peloton has multiple admirers at this level. And even if these talks lead nowhere, I believe the worst of the selloff is over.

Now, investors should know that PTON does carry some risk. And while I think the chances of a deal are pretty good, there’s another corner of the market that I think has even more upside…

According to my research, we could be on the cusp of a massive wave of takeovers in the energy sector. It’s all thanks to the booming Permian region in West Texas — and I think I may have found the next target…

My research staff and I have found a small energy company that’s sitting on one of the most significant oil finds on record. That alone means investors could make some serious profits with this pick… But it’s also the perfect target for a larger energy player — and that could lead to big-time gains, practically overnight.