Today, I want to start by sharing some words from my colleague Jim Pearce over at Investing Daily.

When you read them, some of you may nod your heads in agreement. But when you learn that they were written in October of last year, they’re going to seem downright prophetic.

As we learned twenty years ago, tech stocks can crash hard when they rise too fast. And it’s beginning to look like 2000 all over again. The speculative bubble that drove up tech stocks, cryptocurrencies, and meme stocks during the past year is close to bursting. And when that happens, a lot of money will be lost on overvalued tech stocks.

In hindsight, this looks like an easy call. But just remember how things felt back in October… it seemed like the runup in “stay at home” stocks, Big Tech, and unicorn startups had no end in sight. Many of us were caught up in the enthusiasm.

For those of you who weren’t, good for you. But did you do anything about it?

Jim and his premium subscribers over at Mayhem Trader certainly did. And they’ve been on a roll ever since…

Using “Crash Contracts” To Profit From The New Tech Bubble 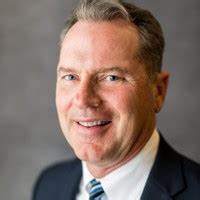 Now, it’s been a while since we checked in on Jim, and some of you may not be familiar with his work.

In addition to helming Mayhem Trader and Personal Finance, he brings a wealth of experience to the table. He was on the front lines during the dot-com bubble as well as the 2008 financial collapse. And he not only survived both events, but prospered.

Jim has been telling his readers for the past few months about the bubble in tech – and how investors can protect (and profit) with what he calls “crash contracts.”

To put it simply, these contracts can protect you when these overvalued stocks come crashing back down to earth. And you don’t have to take wild and crazy risks by short-selling to do it.

Instead, these “crash contracts” allow you to take calculated positions against these stocks in a much safer and effective way – and best of all, it’s easy to learn how…

These “crash contracts,” if you haven’t guessed by now, involve buying put options.

Buying puts are a common way of betting against a stock (or going “short”). But in contrast to traditional shorting, put options allow us to preserve our capital by risking less money upfront. Even better, they can also magnify our potential profits.

A put option is a contract that gives the owner the right, but not the obligation, to sell 100 shares of stock at a specified price (the strike price) at any time before a specific date (the expiration date). When the price of the underlying stock falls, the price of the put option goes up. Usually, you’re simply looking to sell the put for more than what you bought it for.

There are some other nuances to options, but that’s the gist of how this works. And one of the best ways to use puts as a substitute for shorting is with in-the-money put options, as they will closely mimic the stock.

To give you a better idea of how this works, I’m going to share with you a recent example of one of Jim’s recent big winners…

A little over a week ago, Jim told his Mayhem Trader readers about an opportunity unfolding with Warner Music Group (Nasdaq: WMG).

As Jim explained to his subscribers, after closely watching the unfolding squabble between musicians and audio streaming service Spotify (Nasdaq: SPOT), he saw an opportunity.

You may have seen this story in the headlines… The dispute involves several prominent musicians taking exception to Spotify’s continued platforming of the Joe Rogan Experience podcast, specifically around several episodes and guests that dealt with topics related to the Covid pandemic and vaccines.

The details aren’t really important for our purposes. Because here’s where things really get interesting…

As Jim pointed out, several of those artists who pulled their music from Spotify are represented by WMG. That matters because royalties from Spotify (and other streaming services) have become an important revenue source for companies like Warner Music Group. And that led Jim to conclude that the company may end up having to adjust its guidance for the current quarter.

As Jim pointed out, shares of WMG had been rising to unsustainable levels. The stock was already overvalued from both a fundamental and technical standpoint. For example, when Jim first profiled this trade, WMG was trading for 38 times forward earnings – higher than even Netflix (Nasdaq: NFLX).

To understand just how ridiculous this is, remember we’re talking about a music label here.

So here’s the battle plan Jim laid out for his Mayhem Trader subscribers:

WMG has short-term technical support at $35, so I am using the $45 strike price for our conservative trade that expires on October 21. If WMG falls that far by expiration, the return on this trade would be close to 50%. For the aggressive trade, I am only going out to April 14 to capture Warner’s Q1 results. If WMG falls to $35 by then, the return on trade would be over 100%.

Fast-forward to Tuesday morning. WMG announced results for the first quarter of fiscal 2022 and admitted that the current quarter may be impacted by the spat. You can see what happened next… 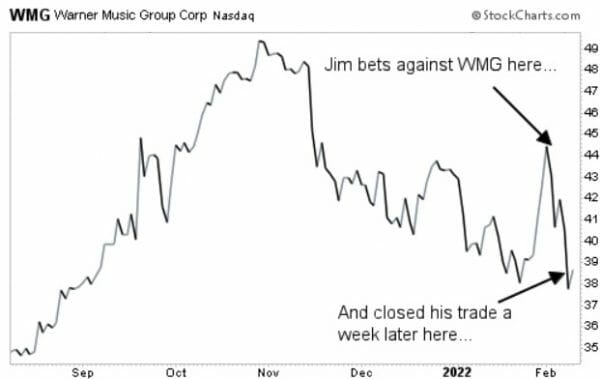 WMG quickly fell below the $39 strike price for the put options he recommended for the more aggressive version of the trade. Remember, that’s a good thing (and boy, was it ever).

That caused the value of the put option to soar – handing Jim’s subscribers an 85% gain.

Now, Jim usually targets a 100%-plus return for his trades. But considering this played out in just one week, I’d say that’s more than good. Excellent, in fact.

As Jim mentioned, they got the news they were hoping for. So it was time to book the profit and move on… After all, there will be plenty more opportunities to come in this overvalued market…

And if Jim is right about this market, then there’s going to be even more gains to be had in the weeks ahead.

My advice: Do yourself a favor and learn more about how this strategy works. Not only is it easy to learn, but it will open an entirely new field of trading opportunities…

Discover how to get Jim’s next trade by clicking here.