The Serious Logistical Problem In U.S. Energy (And How We Can Profit)

I haven’t seen a run like this in quite a while.

Just a few days ago, I was writing about crude climbing to an 8-year peak. But that figure is already outdated, as oil is now at the highest levels since 2011.

Energy prices have been buoyant thanks to resurgent global demand, but geopolitical concerns have kicked the rally into overdrive – pushing average gasoline prices to $3.65 per gallon nationally, versus $2.72 this time last year. 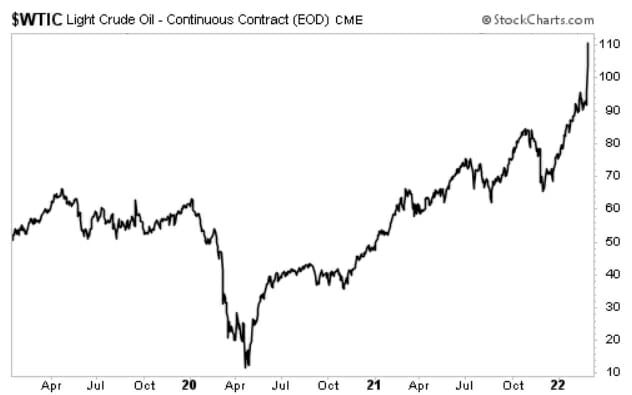 During the holiday season last year, oil prices began to slump after rallying furiously since the spring of 2020. And while I had a strong notion that prices would rebound, even this caught me a little off guard.

We all know the culprit. The Ukraine invasion is getting uglier by the day. And if sanctions against Russia cause exports to halt, then crude prices will likely march even further into triple-digit territory.

There was some speculation that OPEC might open the production spigots a little wider, alleviating the tight market conditions and easing prices. But the cartel hasn’t budged from its planned output.

But rather than weigh in on foreign policy matters, I want to spend some time today addressing things here at home.

You see, a lot of people are talking about the need to produce more energy here in the U.S. It makes sense. Domestic energy security is a good thing, after all.

There just isn’t enough takeaway capacity to support the incremental growth needed to meet demand. A lack of available pipeline capacity has already created severe transportation bottlenecks at times. That happens when you bring 30 million barrels per week to the surface. Moving all this oil to Gulf Coast refineries and export terminals has been a challenge.

The difficulty has been reflected in the number of drilled but uncompleted (DUC) wells. As the name implies, this is essentially a hole in the ground that still requires casing, cementing, and fracking. The delay could be a shortage of labor, but most often arises when there is simply nowhere for the oil or gas to flow.

Shortly before the pandemic struck, there were approximately 8,000 DUC wells across the Permian, the Niobrara (Colorado), the Bakken (North Dakota), the Marcellus (Pennsylvania), and other domestic shale plays.

Several new conduits have come online in the past 24 months to alleviate the congestion. The construction of these new oil highways has helped ease some of the constraints. But all they have done is provide breathing room. Traffic is rising as well. If production continues to ramp up as forecast, it’s only a matter of time before takeaway capacity is maxed out again and the bottlenecks reappear – choking off output.

And we’re not just talking about West Texas either. Pipeline woes have plagued other hunting grounds as well, including the Bakken shale. North Dakota is rich in natural resources but lacks supporting infrastructure. As a result, billions of cubic feet of natural gas have been flared (just burned off). As for oil, drillers that couldn’t find space on local pipelines have sought out alternate arrangements.

Some oil was moved by truck, but that solution proved to be less than ideal. For one reason, the trucking convoys chewed up roads. Moving it by rail is an option, too. But at the end of the day, we simply need more pipeline capacity.

If you haven’t noticed, though, it has become very difficult (impossible in some cases) to secure state and local permit approvals for new pipelines in today’s highly politicized climate.

The Keystone XL Pipeline is but one high-profile example. The proposed $9 billion expansion was intended to transport more than 800,000 barrels per day from Canada to Nebraska, where it would then link with other lines traveling to Gulf Coast refineries.

First proposed in 2008, the controversial project met with fierce opposition from environmental groups and Native American tribes and was rejected by President Obama. It was later revived by the Trump administration, but then subsequently canceled by an executive order from President Biden on his first day in office. That decision drew the ire of Canadian Prime Minister Justin Trudeau and triggered a legal challenge from two dozen states.

But ultimately, the project was scrapped.

Even when governments give a thumbs-up, pipeline construction can still be stymied by injunctions and legal delays at the local level. Just ask Kinder Morgan. For years, Canadian oil producers had to settle for discounted prices because their products had no outlet to the sea and instead had to be routed south to the U.S. The lack of export pathways cost as much as $15 billion in lost revenues yearly.

Seeing an opportunity, Kinder Morgan stepped up and invested $1 billion to expand the Trans Mountain Pipeline System. This would have tripled the flow of oil through the Canadian hinterlands to export terminals on the coast, where the supplies could be shipped to Asian markets. The project had the full backing of the Canadian government, as well as provincial officials in Alberta. But British Columbia threw up roadblocks and the project was locked in a stalemate.

In the end, Kinder Morgan was forced to sell the Trans Mountain system and walk away.

I could go on. But hopefully, you get the picture. Future pipeline battles will be extremely contentious (and costly). At best, they will get bogged down by injunctions and protests that can take years to resolve. Others will be abandoned altogether.

If geopolitical tensions ease, we could see some relief in oil and gas prices. But the domestic infrastructure problem will remain. Until that changes, and as long as the economic rebound from the Covid-19 pandemic continues, we’re likely to continue seeing elevated energy prices.

The good news is that there are ways that investors can play this angle.

Longtime readers know that I’m a big fan of master limited partnerships (MLPs). I talked about MLPs and why they’re great for income-minded investors in this article. And I even shared one of my favorite names — Enterprise Products Partners (NYSE: EPD) – in this piece.

But if you’re looking for more upside, then I think I’ve found one of the best ways to profit…

I’ve found a small company focused on drilling in the Permian Basin in West Texas that’s poised to soar in the coming months.

It’s sitting on top of one of the largest finds I’ve ever seen. And by getting in now before the rumor mill picks up, investors have the chance to pocket triple-digit gains, practically overnight.

Go here now for all the details…