Last October, I wrote that investors should begin preparing their portfolio for a rising interest rate environment.

In that piece, I broadly recommended the financial sector.

This makes sense, of course. As the Federal Reserve raises rates, banks will loan out money for higher rates. And of course, the interest they pay out (to deposit holders like you and me) will rise, but they will lag. This “spread” creates a nice recipe for rising profits.

In that piece, however, I mentioned that not all lenders are created equal. Some will benefit from rising rates more than others.

Aside from my main recommendation for investors to look at regional banks, I also mentioned business development companies (BDCs). With borrowings typically locked in at fixed rates and loans left to float, these will be a key beneficiary of the changing interest rate winds. Even better, BDCs often pay two to three times the yield of your average bank.

BDCs are a little-understood asset class. You typically won’t hear about them on the financial news channels on television, for example.

But income-minded investors would be wise to familiarize themselves with these unique investments.

I wrote a little bit about BDCs back in August. But it would be wise to recap what I said back then – and in just a second, I’ll tell you about one of my favorite BDCs that I think is worth a look right now…

The ABCs Of BDCs

BDCs were created to get capital flowing into smaller to mid-sized privately held businesses. Prior to their establishment in 1980, options for developing and expanding were limited in terms of traditional bank lending. Although, it should be noted that sometimes this cash is used for leveraged buyouts or other big transactions.

This financing can take many forms, from simple unsecured loans to collateralized senior debt to hybrid convertible bonds. It’s not uncommon for some loan packages to have an equity component that gives the BDC an ownership stake in the borrowing company, too.

Similar to REITs, BDCs are exempt from federal income tax as long as they distribute at least 90% of profits to shareholders. That makes them some of the highest-yielding investments around. It’s not uncommon for a BDC to pay a yield of, say, 8% (or even higher).

Music to an income investor’s ears. Of course, I’ve always told readers to be cautious about any security paying such a high dividend. For equities, with a few exceptions, it’s often a sign that there’s trouble brewing underneath the surface.

The same goes with BDCs. We should still do our own due diligence, of course, but thanks to their unique structure, the average yield is higher than your typical stock.

There are about two dozen choices out there, and they all use different tactics and carry their own unique risks.

It’s also worth noting that because these companies don’t retain any profits, they must borrow or issue new shares to raise funding if they want to keep growing. But if you dig into this asset class, you’ll find some established players with a history of surviving uncertain markets.

One Of My Favorites

BDCs are familiar ground to my readers over at High-Yield Investing, my premium income advisory. I’ve covered several over the years, and the biggest among this group is Ares Capital (Nasdaq: ARCC).

Ares has a $20 billion portfolio spread judiciously among more than 350 different holdings. It lends anywhere from $10 million to $200 million to a wide range of private borrowers, including healthcare providers, software vendors, and auto parts suppliers.

The one common denominator: all of these loans earn rich double-digit yields.

But it doesn’t just write a check to everybody who comes knocking. Ares is presented with over $500 billion in potential deal volume in an average year. The tenured investment committee reviews each of these loan applications on their merits and ultimately rejects 95%. In other words, only 1 out of every 20 make the cut.

Aside from a rigorous screening process, Ares invests mostly in senior, first-lien loans backed by collateral. That puts it near the front of the collection line in the event of default. But it rarely gets that far, considering 80% of these borrowers are backed by private equity sponsors that can provide cash lifelines during times of stress.

The end result is that losses have been minuscule, averaging less than 0.1% on first-lien loans over the years – just $1 for every $1,000 invested. That helps explain the 50 consecutive quarters of stable or rising dividends. 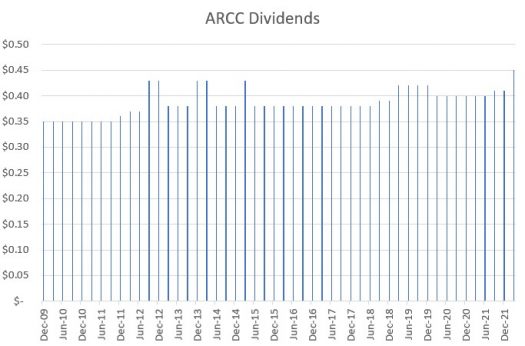 And they are about to head upward once again. Citing record-high loan originations and earnings, management just upped its regular quarterly dividend to $0.42 per share. By itself, the annualized payout of $1.68 provides a top-tier yield of 7.9% — more than quadruple the market average. But there’s more…

The board has also approved an additional $0.12 to be distributed in four equal quarterly installments. The first of these will be payable on March 31. In total, we can expect to see $1.80 in dividends this year, for a payout north of 8%.

There is plenty to like about ARCC, from disciplined lending and strong credit quality to relationships with institutional investors that feed a steady stream of new deals.

But let’s not forget one of the primary motivations for looking at BDCs (and other plays on rising rates). ARCC’s management has smartly laddered its debt maturities at fixed rates, while 80% of its outstanding loans are variable and will float higher with prevailing interest rates. That leaves this lender well-positioned to benefit from the Fed’s ongoing rate tightening.

Add it all up, and ARCC is a viable option for income investors looking to protect (and profit) from rising interest rates.

Editor’s Note: While ARCC is a solid option, there’s another BDC I like that pays monthly…

Most investors looking for income think they have to settle for quarterly dividends. But there are plenty of high-yielding securities out there that pay you monthly — you just have to know where to look.

That’s why I’ve put together an exclusive presentation that reveals 12 of the most generous monthly income plays on the market today. Get the the details here now.