As The Tech Sector Sells Off, Look For More M&A Deals…

If you haven’t noticed lately, some of the market’s brightest stars have dimmed quite a bit lately.

As you probably already know, we’ve seen a broad downturn in tech stocks. The tech-heavy Nasdaq index is down 20% from its peak – the technical definition of a bear market. But that selloff has intensified in spots, with investor appetite that once seemed insatiable suddenly turning sour.

Case in point, Netflix (Nasdaq: NFLX) went into freefall last week, with shares of the video streamer plunging from $348 to $226 in a single session. That pullback wiped out more than $50 billion in market cap within a matter of hours. 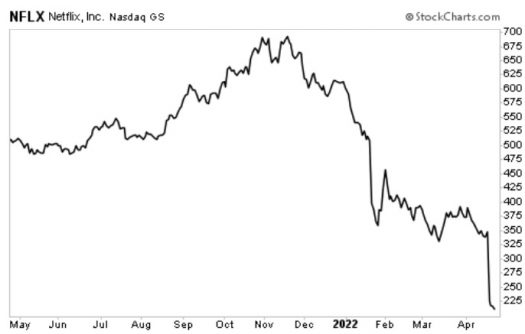 It would seem the market wasn’t happy with the news that Netflix had shed subscribers last quarter for the first time in over a decade. About 200,000 of them, to be exact. But even more unsettling was the dour outlook for 2 million more defections between April and June.

Still, with 222 million paying households, that projects to a mere 1% slippage. Compare that to a 50% decline in the stock over the past three weeks. Does the punishment fit the crime? Well, that depends on how long it takes for Netflix to right the ship and how overvalued the stock was to begin with before the pandemic plays began losing steam.

Then there’s Nvidia (Nasdaq: NVDA), a longtime favorite of fund managers far and wide. During April, the stock has stumbled in all but four trading sessions, losing nearly 30% of its value in the process. The tech darling, which passed Intel last year as the No. 1 chipmaker in the land, may have to abdicate its throne. Supply chain hiccups have snarled the order book for graphics chips, and Wall Street analysts have piled on by slashing price targets. 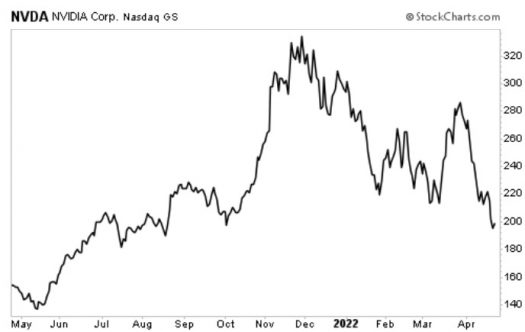 What This Means For Investors

Is the silicon sky falling? That’s a debate for another day. Nvidia did just post record quarterly sales of $7.6 billion and record earnings of $4.44 per share (up 53% and 78%, respectively) and is seeing robust demand in new applications such as blockchain, artificial intelligence, and autonomous vehicles.

The point is, growth expectations have been ranging anywhere from lofty to downright unrealistic. And companies that fail to live up to them are paying the price. Fortunately, aside from putting overheated stocks back within reach, this type of environment can also fuel M&A activity – not that Netflix or Nvidia are targets.

You wouldn’t think Twitter (Nasdaq: TWTR) was either, at least until Elon Musk came knocking a few days ago with a $43 billion offer. The board initially rebuffed the bid and even swallowed a poison bill to discourage a hostile takeover. But the tone has certainly softened since Musk lined up financing through a consortium of big lenders, led by Morgan Stanley.

We just learned yesterday that the offer has been officially accepted by the board. The narrowing proximity between TWTR’s $51.02 open yesterday and the $54.20 offer price gave investors a clue as to the increasing likelihood of that scenario.

I’ll have more to say on this fascinating development soon. But in the meantime, prepare to see M&A activity heat up in the months ahead. As valuations fall back to more realistic levels, cash-rich predators are much more likely to be on the prowl.

In fact, I just recently told readers over at my Takeover Trader premium service about a surprising company that could be Amazon’s next target…

It’s one of the most obvious “no-brainer” potential deals I’ve seen in years. And if I’m right, then it could turn Amazon into a banking and finance powerhouse.

It could be the best investing opportunity of 2022… even though it’s hiding in plain sight. Go here to get the details now.