As Interest Rates Go Higher, Here’s How To Respond…

It’s official. As you probably know by now, the Federal Reserve announced a half-point interest rate hike last week. It was a foregone conclusion that borrowing costs were headed up — the only question was how much. The central bank has been way behind the curve from the start, casually dismissing inflation as a “transitory” concern that would soon wear off.

Fed chief Jerome Powell finally abandoned that term some months ago and is now using words like “entrenched”.

With most key inflation gauges running at the hottest levels in forty years, the market had been bracing for decisive counter-measures. And we just got the opening salvo. For the record, this is the most aggressive monetary policy response in more than two decades. The last half-point rate increase was way back in 2000.

It probably won’t be the last. 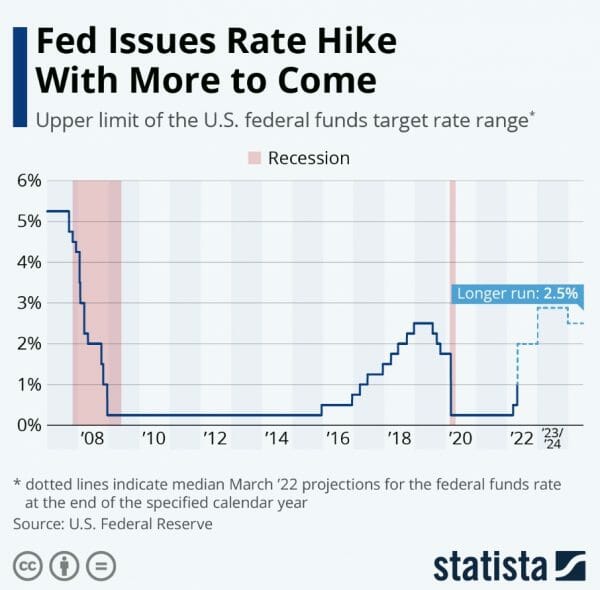 While pledging to remain flexible and react to incoming data on a meeting-by-meeting basis, Powell has already telegraphed that another half-point hike remains on the table. Meanwhile, the quantitative gears have just been switched from easing to tightening.

During the pandemic, the central bank sunk hundreds of billions of dollars each month in Treasury bonds and asset-backed securities to support the financial markets and inject cash into the economy. Those purchases finally came to a grinding stop last month. And now, this lumbering train is about to start moving in the opposite direction as these assets are systematically sold off to shrink the bloated $9 trillion balance sheet.

The initial plan is to unwind $95 billion per month beginning in June.

What This Means For Investors

This is a difficult line to walk. The Fed is clearly (albeit belatedly) pushing policy buttons to cool down inflation. Yet, pushing too hard too fast runs the risk of derailing the fragile economic recovery and even triggering a recession.

Corporate earnings have been overshadowed lately. So you might not have even heard that S&P profit growth has decelerated to just 9.1% this quarter, the slowest pace since Covid was raging. 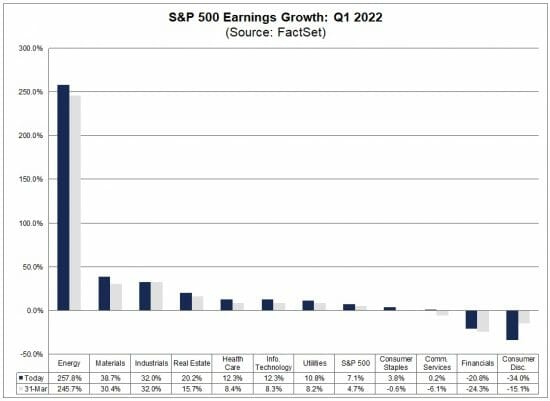 Needless to say, investors are having trouble digesting all of this. The knee-jerk reaction from the market was positive, with traders initially driving the Dow Jones up 1,000 points after the Fed’s announcement. There was some relief that its tone wasn’t more hawkish. But much of that rally came from short-covering rather than genuine enthusiasm – and all of those gains unraveled the very next day.

The bears still firmly have the upper hand right now, with the major averages losing ground for five straight weeks.

I want to revisit some comments from the May 2021 High-Yield Investing issue when I first sounded the alarm that a storm was brewing.

The combination of supply constraints and runaway government spending will eventually lead to a day of reckoning. With the dovish Federal Reserve keeping short-term rates near zero and running the printing presses at full speed, it’s a matter of when, not if.

Some fear that the Fed may wait too long to take pre-emptive action to forestall inflation. By then, it may be too late. Once unleashed, it’s difficult to bottle up – have you ever tried putting toothpaste back in the tube? Whether it’s today, tomorrow, or six months from now, inflation is coming and the Fed will have no choice but to tighten.

Inflation has since come home to roost.

So where does that leave us? Well, the days of easy money are over for now. Mortgage rates, for example, have just hit 5.27% — the highest level since 2009. And if it’s more costly to buy a 4BR/3BA home in suburbia, imagine borrowing $10 or $15 billion to upgrade manufacturing equipment or build a new factory.

Fortunately, we don’t have to go straight from accommodative to restrictive. There is some neutral ground in the middle. And that’s what the Fed is steering for – a soft landing.

As income investors, we must watch the interest rate barometers closer than most others. Whether it’s corporate bonds or preferred stocks or anything else with a coupon, Fed policy has a direct impact on yield-bearing instruments. Fortunately, we’ve been battening down the hatches for a while now, and even pivoting into securities that can benefit from rate tightening.

[Related: The Perfect Way To Play Rising Rates (And Nab An 8% Yield)]

Expect that to continue, as there could easily be several more rounds of this before the end of the year. Balance sheet health is even more important than ever in this environment. The silver lining? All of those paltry zero-point-something payouts will soon be a thing of the past.

For now, though, I recommend caution. The market hates uncertainty, and this selloff could get uglier until we get more clarity on where rates might level out. With that in mind, I plan to exit some holdings in the near future and use protective stop losses on others to nail down gains.

But in case you’re feeling pessimistic, here’s the bright side… As this market selloff intensifies, the pool of watch list prospects deepens. So stay tuned…

In the meantime, I’ve identified a list of 5 “bulletproof” picks that can deliver consistent income in ANY market…

If you want picks that have proven to hold up, allowing you to sleep better at night (while still profiting), then you need to check out my latest report. I reveal my 5 favorite high-yield picks that have weathered every dip and crash over the last 20 years and STILL handed out massive gains…

With picks like these, you may never have to worry about what the market is doing again! Go here to learn more now.