Why The “Smart Money” Is Buying The World’s Oldest Asset (And You Can, Too)

A couple of weeks ago, I told readers how one of my holdings over at High-Yield Investing (a student housing REIT) got a nice pop on the news of a takeover offer from the asset management giant, Blackstone (NYSE: BX).

I noted how, while we typically don’t go looking for takeover targets in that premium service, the deal made perfect sense. After all, institutional investors are constantly looking for unique assets that can provide steady income and predictable returns.

This got me thinking…

There is another asset class that has existed for centuries (millennia, actually). Institutional investors began dabbling in this space a couple of decades ago – and lately, their interest has reached a frenzy.

Yet it has only been accessible to retail investors like you and me since 2013. In fact, there are only a couple of publicly-traded options. But I think you’ll agree it’s a fertile place for your money to grow.

The Dollars And Sense Of Farmland

Back around 1990, mid-grade Iowa farmland commanded a price of around $1,000 per acre. Today, that same land fetches well above $8,000 per acre, according to a recent survey of farm realtors. That’s an increase of more than 700%. And richer, grade-A farmland often sells for $10,000 per acre or more.

In short, farmland has been a very productive asset – in more ways than one. According to the National Council of Real Estate Investment Fiduciaries (NCREIF), farmland values increased 14.7% annually on average between 2004 and 2018, versus 9.1% for the S&P 500. That’s an outperformance of more than 500 basis points per year over equities – with half the volatility.

And over the long term, average farmland values tripled between 1970 and 2020, according to the USDA. 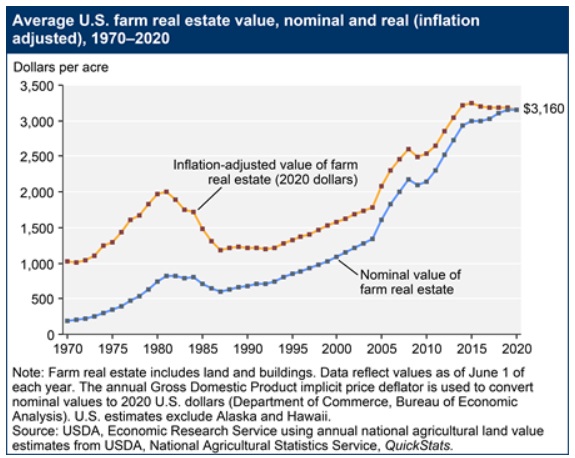 And any capital appreciation is just icing on the cake. After all, farmland isn’t really bought for its growth potential. Sure, you might exit in the future at a higher price than you paid. But first and foremost, this is an income-producing asset class.

Investors typically don’t know the first thing about farming. So after buying the land, they immediately lease it back to experienced operators. This is often done through a sale, lease-back agreement. Here’s a textbook example.

TIAA-CREF recently bought 19,181 acres of sugarcane property from an outfit called Alico for $91 million ($4,700 per acre). Under the terms, former owner Alico now rents the land back under a 10-year lease for $238 per acre. Multiplying $238 times 19,181 acres means that the new buyer will collect $4.5 million in annual rental income — for a cash yield of 5% on the purchase price.

That’s far more income than you’d get from a bond portfolio — and bonds generally don’t appreciate each year.

More than half of the farmland in states like California and Iowa is occupied by tenant farmers who lease the land. And the rent checks are backed by whatever crops are grown — with the added insurance of $25 billion in average annual government farm subsidies.

Over the past generation, the number of U.S. farms and ranches has dwindled by more than half a million. One by one, large tracts of land once suited to the cultivation of wheat or soybeans have been paved over to erect shopping centers, doctors’ offices, and apartment complexes.

And they aren’t coming back.

According to the latest census from the US Department of Agriculture (USDA), we lost more than 12,000 farms last year alone. This continues a longstanding trend toward urbanization. Between 1992 and 2012, about 31 million acres of U.S. farmland disappeared.

That’s a landmass equivalent to the state of Mississippi.

Yet, on the demand side of the equation, food consumption is rising inexorably higher as the global population grows by 200,000 people per day.

You can see why “smart money” has been piling in.

I already mentioned TIAA-CREF. The giant teachers’ pension fund has gobbled up more than $8 billion in farmland (including wine vineyards) and is now the world’s largest agriculture investor. Since the sub-prime mortgage crisis erupted, Harvard University’s chief endowment has invested nearly $1 billion in farmland from Australia to Brazil.

Elsewhere, Swiss banking giant UBS bought 9,900 acres of tillable soil in Wisconsin, along with 1.6 million bushels of grain storage. It followed up with the purchase of 19,200 acres in Texas and now owns around 50 properties devoted to growing vegetables, rice, apples, and other crops.

Meanwhile, some of the world’s wealthiest individuals have been following their lead. Prior to their divorce, Bill and Melinda Gates had amassed 269,000 acres of farmland. Jeff Bezos has acquired 420,000 acres.

How You Can Invest…

This isn’t the first time I’ve brought up farmland. And for good reason… aside from the impressive performance, there is just something comforting about owning a “real” asset.

In an uncertain world and a volatile market, it’s exactly the kind of thing I’d like to own.

The problem is, unfortunately, the door has been locked to ordinary investors like you and me… unless you have a few million to spare and are willing to show up at deed auctions and outbid these land moguls.

And even if you did, then you’d either have to find a tenant or prepare to roll up your sleeves and get your hands dirty.

That is until REITs entered the picture.

As you may know, I’m a big fan of REITs. These unique investment vehicles are structured in a way to maximize income for investors. They either borrow money or issue shares, then buy real estate assets – whether it be apartment buildings, commercial offices, timberland, or other… you guessed it, farmland. Any income generated is tax-free as long as 90% of it is passed along to shareholders.

This makes REITs some of the highest-yielding investments on the market. And over at Takeover Trader, we recently added a farmland REIT to our portfolio…

As the fight for prime farmland heats up, I think an agriculture-minded institutional investor would love to scoop up multiple productive properties in one fell swoop, instead of buying them piecemeal.

Buyout or no, farmland is a timeless and dependable asset. They can’t print any more of it, which can’t be said of the dollar.

I won’t share the name of this pick out of fairness to my premium subscribers, but in all honesty, there aren’t many publicly-traded options available in this space. So if you’re even remotely interested in the idea of owning farmland, then do yourself a favor and look into this further.

P.S. With $66 billion in cash just sitting idle on the balance sheet, I think Amazon is about to pull off one of the biggest, most “shocking” deals we’ve ever seen…

If I’m right, not only will it will change the tech landscape forever – but it could also lead to massive profits for investors who get in before the rumor mill starts up.