Technical Tools Are Great, But This Is Even More Important…

In the 1930s, a financial editor at Forbes magazine pieced together chart patterns. Richard Schabacker, considered to be the “father of technical analysis,” went beyond identifying how patterns looked on charts. He also looked broadly at investor psychology and noticed that it could explain why some chart patterns form.

Psychology can be a valuable tool for traders to understand. Investor psychology can help explain resistance on a chart, for example. After a bear market, there will be some investors who will be thankful to recover their losses. They might sell when the market gets back to its old highs. This appears as resistance on the charts. After resistance breaks and prices start moving higher, we often see a “market melt up”. This happens when investors rush in, worried about missing out on the upside.

This is an oversimplification, but investor psychology does help us understand a great deal about the market action. Charles Dow, the creator of the Dow Jones Industrial Average, recognized this idea more than a century ago. In short, Dow noticed that bull markets start when investors are gripped with a sense of doom. And they end in euphoria.

Over the years, this insight has led to the development of a number of trading techniques. It’s easy to forget, but charts were the original trading tool. But some analysts wanted more precise signals, so they developed technical indicators based on the price action.

Stochastics and Moving Average Convergence/Divergence (MACD) are examples of indicators that attempt to measure investor psychology by showing when price moves reflect excessive levels of pessimism or optimism.

In theory, these indicators show oversold or overbought conditions in the market. In practice, oversold markets tend to drop lower than expected. And overbought indicators can signal the beginning of a new bull market.

Or take the CBOE Volatility Index (VIX), or “Fear Index,” for example. This is an indicator that measures fear and complacency. The indicator uses options prices to track what investors are willing to pay for downside protection to hedge their portfolios with S&P 500 options. 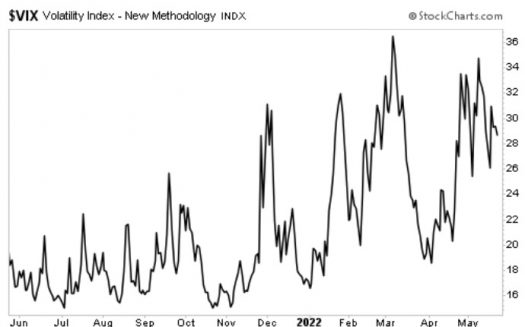 In the chart above, we can see that “fear” began to rise in the market as tensions between Russia and Ukraine rose, culminating with the Russian invasion in February. This is undoubtedly useful information. Yet as useful as tracking volatility can be, it has limitations. For example, the VIX only applies to the S&P 500 index. It also rarely provides trading signals, and it never tells us anything about individual stocks. And there are thousands of stocks trading in the market…

What are traders and investors supposed to do about these limitations?

As you encounter various indicators and technical tools, you may find that many of the most widely-followed seem to be among the least useful for buying and selling decisions. But what’s important to note is that the theory behind them is usually still valuable. For example, when most traders are fearful, it is usually time to be bullish. When most traders develop a sense of complacency, it is usually time to worry about a bear market.

The point is that many technical tools have much to offer in terms of investor psychology. Traders would be wise to acknowledge the limitations of various tools and indicators. And that means using them for insight into the market (or individual stocks) is often more useful than using as a hard-and-fast “buy” signal.

We are not advocating ignoring of these tools, but simply cautioning to not buy too much into one tool or another. Many of the original insights developed in the 1930s or earlier are still useful, for example. But we think they should serve as the basis of original research rather than concrete rules that are expected to work just as well as they once did.

P.S. If you want to keep making profitable trades in this wild market while lowering your risk at the same time, then you need to check out a trading service offered by our colleague Robert Rapier…