The Surprising Reason Why Most Investors Don’t Beat The Market

Here’s a cold hard truth… most investors are terrible investors.

The vast majority of investors are more like speculators and won’t make much in their brokerage accounts this year… or next.

Now, this might anger some of you. But it’s an unfortunate fact. A fact that gets highlighted every year when Dalbar, Inc. a company that studies investor behavior and analyzes market returns, publishes its annual Quantitative Analysis of Investors Behavior report, or QAIB for short.

This has been the nation’s leading study on investor behavior for the past 28 years. Inside, it sheds light on investor performance in equity mutual funds.

And it’s not great.

Last year, the study found that the average equity fund investor underperformed the S&P 500 by more than 10%. The exact results were 18.4% for the individual compared to the S&P 500’s stellar 28.7% return.

This was the third-largest underperformance ever observed by the QAIB study.

Now to give the individual a bit of credit, an 18% performance is nothing to scoff at. And the individual performed well in 2020, underperforming the market by only 1.3% that year.

But over the last 30 years, the average equity fund investor has underperformed the market by an annualized 3.5%.

Some might think that a 350-basis point difference is just splitting hairs. But in reality, that’s a massive chunk of change that investors are missing out on over time. Just take a look at what that underperformance translates into when looking at the potential growth of $100,000: 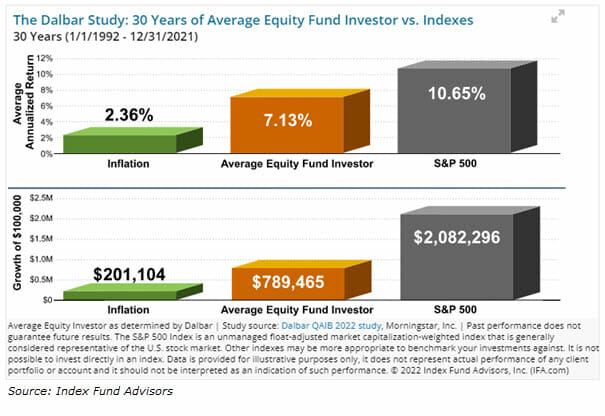 As you can see, the average equity fund investor is losing out on nearly $1.3 million dollars over time…

According to Dalbar, the biggest culprit of this underperformance is simply their behavior. The report shows that people are more often than not their own worst enemies when it comes to investing.

In fact, I’ll give you an example…

What To Do When Traders Get Tested…

It’s no secret that I’ve been heavily bullish on the energy sector. Since January, I’ve been telling readers to load up on oil & gas stocks — and I’ve offered several ideas to invest. Every single one of those picks is up — by 30%, 42%, and more — all in six months or less.

Of course, it doesn’t take a rocket scientist to pinpoint those trades. All it took was a willingness to jump in. But this Dalbar study demonstrates something I’ve been saying all along about our moves in the energy sector…

This ride won’t last forever. It feels great right now, but as I’ve mentioned before, oil – and the energy sector at large – is a boom-and-bust business.

Right now, we’re enjoying the boom part of it. But rest assured, the bust will happen and that’s when our mettle will be tested.

It will be difficult. Our emotions will play tricks on us, leaving us wanting to hold out in case the stock gets back to its previous high so we can sell at the very tippy top. Unfortunately, that’s not how it ever works out.

Just know that the ability to stick to the trade plan is what separates the average investor that underperforms and the investor that continually builds wealth and beats the market.

This study reinforces my strong belief that the code to “cracking” the market is working towards understanding your own psychology — the emotions that flood through your head when a trade goes against you, or you’re sitting on hefty profits.

This is why I pound the table on risk management, cutting losses short, and studying investor behavior. Because I know that if you plan your trade and trade your plan you will greatly improve your investment results.

Here’s what I want you to understand… We are not marrying the trades we make. Therefore, we shouldn’t get emotionally attached. They are simply ticker symbols in our accounts to help us build wealth. When it’s time to let one (or more) go, there should be no hesitation.

Don’t settle on being average… it’ll cost you millions.

Editor’s Note: The space economy is forecasted to soar sevenfold to $2.7 trillion in the years ahead. And there’s one guy who leading this space race… Elon Musk.

And while regular investors like you and me can’t invest directly in his most audacious space plans — like SpaceX and Starlink — I have found “backdoor” way to get in that you won’t hear about anywhere else. In fact, without this company, some of Elon’s plans may not even get off the ground.

Go here to get all the details now.