Did you know a staggering 32 million visitors crowd into the gaming Mecca of Las Vegas each year? Atlantic City welcomes about 27 million. Even smaller regional riverboat markets like Shreveport/Bossier Louisiana (my hometown) host thousands of eager players on any given weekend.

Of course, the overwhelming majority do NOT hit the jackpot.

Sidelined for a while during the pandemic, the casino industry is back… and ready to make up for lost time.

Inbound traffic to nearby Harry Reid airport rebounded to 4.2 million fliers per month in May, a 46% increase from April 2021, visitors are once again pouring into Las Vegas. And they leave behind enormous sums of cash – about $22 billion annually. That’s roughly $420 million per week.

Surprisingly, most of that is spent outside the casino, not inside. Annual gaming wins from table games and slot machines amount to roughly $7 billion, approximately one-third of the total. That means two out of every three dollars is spent on lodging, drinks, dining, clubs, show tickets and other activities.

Once considered loss-leaders just to lure in gamblers, property owners have invested heavily to renovate and update their lounges, showrooms and buffets. These ancillary areas of operation now take in more cash than the casinos. Non-gaming revenues have accounted for more than 50% of the revenue pie for more than 20 years running.

This same story is playing out from coast to coast.

Once limited to Nevada and New Jersey, Vegas-style action has flourished in the nation’s heartland over the past couple decades. Spurred in part by the prospect of much-needed tax revenues, attitudes regarding casino gaming have become far more relaxed and permissive. State regulators and politicians have given the green light to numerous projects and expansions, including the installation of slot machines at horse-racing tracks such as Arkansas’ Oaklawn Downs.

Today, more than half of the country allows some type of commercial casino wagering. Until the Covid outbreak, most markets were reporting record numbers. And now that the worst of the pandemic is over, many gaming markets are on pace to break previous records.

And with the Supreme Court striking down the federal ban on sports wagering, many of these facilities are also now getting a cut from the billions that used to be wagered underground on the Super Bowl and other big sporting events.

All of this spells opportunity for investors.

How You Can Invest…

Now, there are several ways to invest in the casino business. There are risks, of course, but the upside might be too good for some investors to pass up…

For example, let’s take a look at Wynn Resorts (Nasdaq: WYNN). Gamblers pumped $1.1 billion into the company’s Vegas slot machines last quarter ($80 million of which never came back out).

Meanwhile, 77% of its rooms and suites were occupied at an average daily rate of $432. Multiply that by about 4,700 available rooms, and you can see how fast the money pours in. Of course, drinks flow freely; bars and restaurants pulled in $130+ million.

This diversification of the revenue stream means there are more ways to separate visitors from their dollars. Add it all up, and Vegas operations took in $159 million in revenues last quarter. Not bad for three months.

Keep in mind, travel is just starting to bounce back. But the numbers are still pretty astounding.

Still, the company has significant operations in Macau. And thanks to the Chinese government’s restrictive “Covid-zero” policies, those properties are bleeding cash and weighing down on what are impressive numbers elsewhere. You can see how that’s impacted the stock — after rebounding for a year after the Covid selloff, shares are now right back where they started… 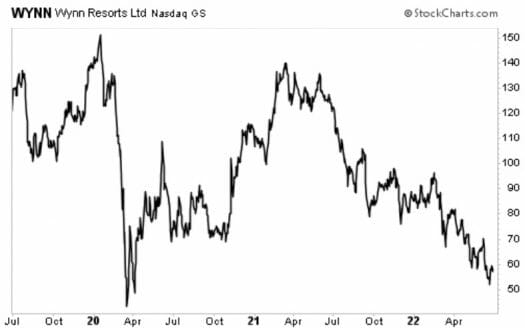 With this in mind, it’s understandable if investors find WYNN a little risky at this point. The same goes for Las Vegas Sands (NYSE: LVS), which operates in lucrative Asian markets from Macau to Singapore.

Penn National (Nasdaq: PENN) was once the darling of Wall Street (and the Reddit investing crowd), thanks in part to its stake in Barstool Sports and the expansion of its digital sportsbook, which now operates in 12 states. After a furious runup, it’s now fallen back to more reasonable levels. But I wouldn’t blame some investors for being reluctant to invest in this former “meme” stock, either… 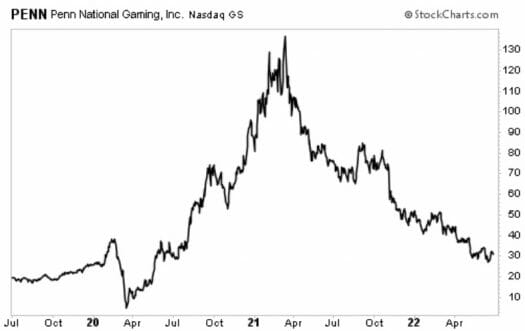 Boyd Gaming (NYSE: BYD) is also an option. It caters primarily to Las Vegas locals, but has a total portfolio of 28 properties located in other states such as Illinois, Louisiana, Mississippi, Missouri, Ohio, and Pennsylvania. The stock raced from $15 to $70 per share since March 2020 and has held strong since then, now changing hands for a little less than $50. 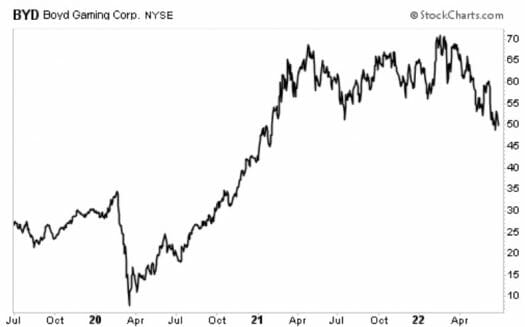 Of the names I’ve mentioned so far, BYD may be the best way for investors to profit from a return to the casinos (without all the China or “meme” stock baggage).

While the house always wins, casino stocks have their share of risks. For one, there is also quite a bit of fixed overhead expense, which can drag down earnings during times of economic distress. These companies are also known to occasionally bite off more than they can chew with regard to debt. Leveraged buyouts and mergers have, at times, stretched balance sheets dangerously thin.

So what’s the alternative? Simple, instead of the tenant, consider investing in the landlord. There are two real estate investment trusts (REIT), that allow you to do this.

I’ll spare the detailed analysis, since we actually hold one of these names in my premium High-Yield Investing portfolio. But since there are only two REITs that deal exclusively with casinos, they’re easy to find…

Both are in the business of purchasing gaming properties and then leasing them back to the operators using what are known as “triple net” leases. This means the tenants (the casinos) are responsible for maintenance, taxes, and insurance — in addition to rent. All the leases are long-term and contain rent escalators. This means cash flows will increase at a reasonable rate for the foreseeable future.

This means more money for shareholders — in fact, they are obligated to return 90% of taxable profits via dividends.

P.S. You won’t hear about investments like this in the mainstream financial media. So if you’re looking for the best high-yield opportunities the market has to offer, then you should check out my special report…

You’ll learn about 5 “Bulletproof Buys” that have weathered every dip and crash over the last 20 years and STILL hand out massive gains to investors. You’ll also learn more about High-Yield Investing and how to get full access to my premium portfolio.