My Favorite Farmland Pick Is Offering Investors A Rare Deal…

Did you see where Bill Gates just scooped up a massive parcel of farmland in North Dakota?

The purchase, which grabbed headlines last week, was made through one of the Microsoft co-founder’s various trust entities. It involved 2,100 acres of prime potato-growing land and went for a cool $13.5 million?

This isn’t a one-off event, either. Gates has invested hundreds of millions over the years and amassed 269,000 acres across a dozen states from Louisiana to Washington. That’s a land mass about 320 times the size of Central Park. It’s a long way from computer operating systems to tractors, but the tech titan clearly sees something he likes. And he’s not alone.

In fact, back in May, I mentioned that deep-pocketed investors have been doing this for years. According to The Land Report, Amazon founder Jeff Bezos has acquired 420,000 acres of farmland. Media mogul Ted Turner owns two million acres of ranchland. And at April’s Berkshire Hathaway shareholder meeting, Warren Buffett singled out farmland as one of the most productive and attractive asset classes.

I’ve been banging this drum for years. There is a limited (and shrinking) supply of arable soil, yet global demand for crops and agricultural products continues to grow. Farmland has appreciated at a healthy double-digit clip for decades, while also throwing off a predictable stream of rental income from tenant farmers. You don’t think Bill Gates is out there personally planting seeds?

A Rare Deal To Own Farmland…

Considering farmland is also a reliable inflation hedge and a great portfolio diversifier (it isn’t closely correlated with stocks or bonds), it can be a no-brainer for most investors. Trust me, I don’t use that term very often.

Still, that doesn’t mean it’s foolproof. In a bear market like this, almost nothing is safe.

Gladstone Land (Nasdaq: LAND), which owns 164 farms in 15 states, has seen its market cap wither this summer. The stock has been cut in half over the past few months, sliding from $40 in April to near $20 last week. Given the magnitude of that decline, you would think the company was facing some ominous threats that could seriously threaten its future earnings. 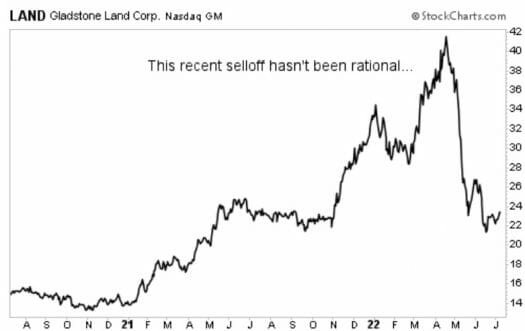 Nope, this is just another textbook example of good companies being thrown out with the bad in an indiscriminate market selloff. LAND has actually been punished more severely than the broader market, which is puzzling considering its well-known defensive qualities.

So management has just stepped forward to set the record straight and provide an update on where things stand.

First things first, agricultural products tend to be fairly recession-proof. So even with the economy slowing, Gladstone’s properties remain 100% leased and base rental revenues climbed by $700,000+ last quarter thanks to multiple acquisitions. Adjusted funds from operation (AFFO) totaled $0.19 per share, versus $0.20 the prior period.

That’s right. Earnings slipped by a penny. Yet, that figure is still the third-highest quarterly profit in company history. And it easily meets the $0.136 in dividend distributions, with a comfortable coverage ratio of nearly 140%.

The market is duly concerned with the rising cost of farm inputs, such as diesel fuel and fertilizer. But most of Gladstone’s renters locked in supply prices at the beginning of the year. Furthermore, food prices have been outpacing inflation, increasing 10.1% over the past year, versus 8.6% for the benchmark CPI.

Keep in mind, Gladstone gets a cut of the profits whenever crop prices and yields are strong and farm income exceeds certain thresholds. These “bonus” payments more than doubled last year versus 2019 and 2020 levels. While they slacked off last quarter, management is expecting an uptick as several new farms are added to the system.

But what about debt? Given Fed tightening, borrowing costs for most companies are on the rise, biting into the bottom line. True. But not Gladstone. The company has borrowed $665 million to fund its acquisitions. But 99.8% of that debt is set at fixed rates averaging just 3.25% for the next five years.

Lease expirations can sometimes be a trouble spot for real estate owners. But again, not here. This landlord only has one lease scheduled to expire within the next six months, and it is expected to be renewed at flat to slightly higher rates.

Perhaps the biggest concern is the persistent drought that continues to plague the western part of the country. Farms with inadequate irrigation or water access have been losing value, while those with plentiful sources have been in greater demand. Fortunately, Gladstone does proper due diligence, and this is one of the primary considerations.

The company just had two dozen California farms evaluated by independent third-party appraisers. The result? The appraised value of these farms has risen by $13 million. Translation: lack of water isn’t a concern here.

So let’s sum up. The market is running a 2-for-1 sale on LAND. Yet, underlying farmland (as measured by the NCREIF Index) is more valuable than ever, delivering a return of 9.7% over the past 12 months. Gladstone’s net asset value (NAV) has increased. Cash flows remain near record highs. And the monthly dividend was just hiked again – the 26th increase in the past 29 quarters.

This disconnect won’t last forever. That’s exactly why I plan to buy LAND for my own portfolio. (The yield doesn’t meet my 4% minimum for inclusion in High-Yield Investing).

Of course, this is hardly an isolated example. The S&P 500 has just suffered its worst first-half performance since 1970, deepening the pool of oversold dividend payers whose stock prices have become utterly divorced from their financial statements.

I’ll have more to say about emerging opportunities like this in the weeks ahead. In the meantime, our average portfolio holding over at High-Yield Investing pays 7%. So if you’re looking for the best high-yield opportunities the market has to offer, then you should check out my latest research…

I’ve identified five “bulletproof” picks that have weathered every dip and crash over the last 20 years and STILL delivered massive gains to investors. Go here to learn more now.