The Best Performing REIT In My Favorite Under-The-Radar Sector

When it comes to real estate, we tend to picture sleek high-rise office towers or massive retail developments anchored by national chains.

But believe it or not, there’s a corner of the real estate sector that has consistently delivered the highest investment returns of all property groups.

I’m talking about the self-storage business.

The monthly rent checks from these tiny 10-by-10 square-foot boxes may be small, but they’re also plentiful — allowing for spectacular dividend increases over the past few years.

I’ve written about this growing sector before, including why investors should give storage REITs strong consideration.

But if you’ll indulge me, today I want to briefly recap my case for storage REITS before telling you more about one in particular that might be the best of the bunch…

The Case For Public Storage REITs (A Recap)

Microwave ovens. Lawn care equipment. Fishing tackle. Snow skis. You’d be surprised at the wide assortment of neglected things that end up in garages and closets. The easiest way to de-clutter is to move these seldom-used possessions into a storage unit.

Back in 1995, there were about 25,000 self-storage facilities nationwide. But they have been popping up at a rate of 1,700 per year on average. So the number of locations has already doubled to 50,000 and continues to grow. According to the Self-Storage Association, these warehouses contain 2.3 billion square feet of space for rent.

To put that figure in perspective, Minnesota’s cavernous Mall of America is roughly 5 million square feet — so we’re talking about more than 400 of those.

On average, there are about four new self-storage facilities opening per day. That expansion reflects growing demand from homeowners. You don’t open new facilities if older ones are empty. Even with capacity doubling over the past 15 years, national occupancy rates have remained stable around 85% — higher in some locales.

Meanwhile, average monthly rent for a standard 100 square foot unit has increased to around $100 from $56. According to real estate firm Cushman & Wakefield, the breakeven occupancy rate for a self-storage facility is approximately 40%, meaning even half-full locations can still turn a nice profit.

Part of this trend is driven by downsizing in the baby boomer demographic. Then there’s the Covid pandemic, which led many Americans to uproot and relocate. But over the long-term, the storage industry benefits from each of the “four ‘D’s”: divorce, death, density, and dislocation. In reality, any major life event can trigger the need for storage… college graduation, marriage, career change, not to mention catastrophic weather such as floods and hurricanes.

Whatever the cause, usage has never been higher. And that’s just one of many reasons I love this industry.

Every time a new unit is built, there is somebody waiting to fill it with their stuff — and the average lease period is 12 to 18 months. Safekeeping old bed frames and television sets may not be the most glamorous business. But these facilities are generating annual rental income in excess of $24 billion.

And that figure continues to grow.

The Best In The Business

But Extra Space Storage (NYSE: EXR) just might be the best in the business. Founded in 1977, the company has expanded through acquisition and now boasts a national portfolio of nearly 2,000 owned or managed properties from coast to coast.

These facilities contain 1.4 million individual rental units comprising roughly 150 million square feet of space. Incidentally, that’s enough room to provide 12 square feet of storage space to every one of the 10 million residents in the state of Georgia.

As is common in the industry, ESS offers temporary discounts to help attract first-time renters. But once there, 60% of those customers stay at least 12 months and 40% stick around for 24 months. And thanks to rising demand, the company has been steadily increasing rental rates at a solid 5% to 7% annual pace over the past five years.

In turn, management has been able to double its quarterly dividend over the last five years – and it continues to climb. Thanks to robust demand, management just approved a 20% hike to $1.50 per share, or $6.00 annually. At recent prices, that works out to a respectable 3.2% yield.

And as you can see from the chart below, the dividend has grown for the past 12 years. But that generous (and well covered) payout only part of the story here… 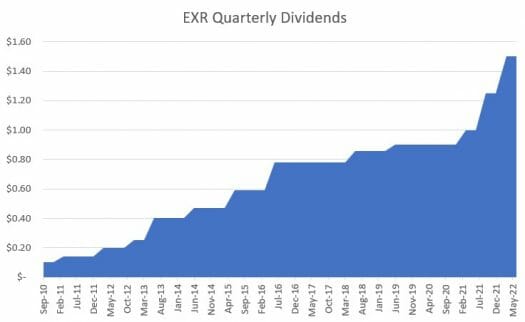 Growth opportunities still abound in this fragmented industry. The top self-storage REITs own or operate only about one-fifth of the available storage square footage in the United States, leaving 80% of the sector ripe for acquisition.

Most competitors have been slow to adopt new technology. While many rely on hard copy ads, ESS was among the first to embrace social media, search engine optimization, algorithmic pricing models, and data analytics. The company shares these best practices with all its new acquisitions, helping optimize their performance.

I also like that Extra Space Storage manages more than 1,100 locations on behalf of third-party owners under contracts that are adding tens of millions in ancillary fees per quarter. Add it all up, and you can see why EXR has delivered the strongest total return of just about any publicly-traded REIT on the market over the long-term. 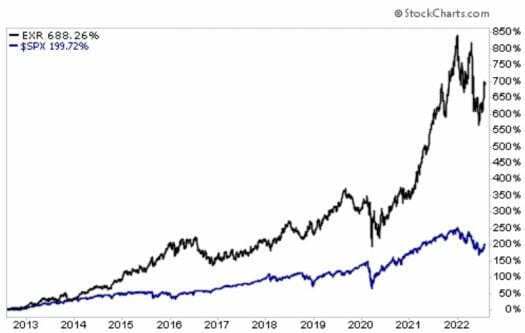 Over at my premium newsletter, High-Yield Investing, we have a minimum threshold we look for in our official recommendations. And while EXR doesn’t quite meet the cut, you would do well to give this name some serious consideration for your portfolio.

Also, remember that REITs don’t pay corporate income tax, provided they distribute at least 90% of their taxable income to stockholders. So most of the dividends paid to shareholders are fully taxed as ordinary income. In other words, most REIT dividends don’t qualify for the reduced 15% dividend tax rate. Of course, investors can avoid taxes on these distributions entirely by holding REITs in a tax-advantaged account like a Roth IRA.

In the meantime, if you’re looking for long-term wealth builders that pay more than the measly sub-2% yields offered by the average S&P 500 stock, then you need to check out my latest research. Each month, we’re finding yields of 6%, 8%, and even 11% from securities you won’t hear about anywhere else.