Want To Stay Out Of Volatile Stocks? Here’s How…

You’ve probably noticed this before. On days when the market is up big, some stocks just seem to consistently trade higher than others. Way more.

I’m not talking about anything related to a company’s specific performance, like an earnings announcement or product release. There are just some stocks where if the market is up, say 2%, then chances are it’s up 4%. The reverse can be true when the market is down.

Why is that? The answer can be found in a metric called beta.

Beta is a measure of a stock’s price volatility relative to the overall market. It’s usually calculated by comparing a stock’s price movements to the S&P 500 Index over the trailing 12-month period.

Here’s how it works…

A stock with a beta of 1 will tend to move higher and lower alongside the S&P 500. Securities with a beta greater than 1 tend to be more volatile than the index, and those with betas below 1 tend to be less volatile. Stocks with negative betas tend to move in the opposite direction of the broader market — meaning when the S&P tumbles, they will likely move higher. 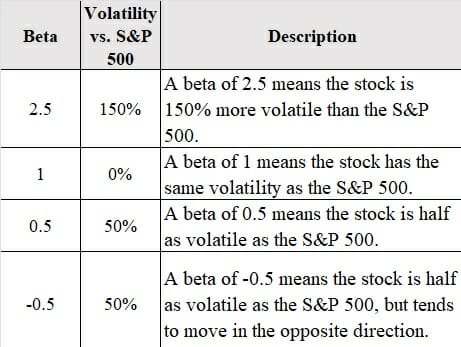 I bring this up because many investors are likely feeling a bit jittery in this market. After enjoying a furious run-up during the past couple of years, the broad indices corrected sharply to kick off 2022. Consequently, we now find ourselves in a bear market.

While it won’t last forever, you may be growing sick of the rollercoaster ride. But rather than hop off and abandon the market, I suggest adding a few low-beta names to your portfolio.

Two utilities that come to mind are American Electric Power (NYSE: AEP) and Consolidated Edison (NYSE: ED). Both offer the kind of “boring, reliable” protection that risk-averse investors may find appealing (AEP’s beta is 0.35, ED’s is 0.25). Not to mention, they offer market-beating dividend yields of over 3%.

But the search for low beta (or income) doesn’t have to stop at these sectors. In fact, you can find both in some pretty surprising places.

For example, when my colleague Nathan Slaughter wrote about low-beta stocks a few years ago, he mentioned Physician’s Realty Trust (NYSE: DOC). This is a real estate investment trust (REIT) that owns and leases doctor’s offices, surgical clinics, and hospitals.

With a market cap of less than $5 billion, you wouldn’t expect to find low volatility here. But the REIT carries a beta of 0.75 — and yields about 5% at recent prices.

Thinking about this piqued my curiosity, so I ran a screen for low-beta S&P 500 companies that also yield more than 3%. I also narrowed the screen for profitable companies. Here’s what I found… 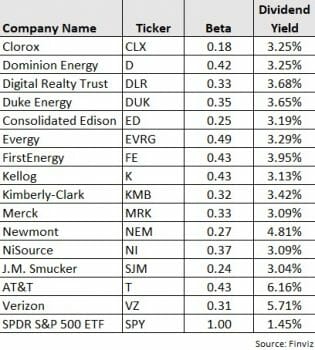 If you’re looking for a little less volatility in your portfolio, then the 15 names in the table above is a good place to start. But as I pointed out earlier, it doesn’t have to stop there.

In addition to smaller names outside of the S&P 500, there are a host of so-called “factor” ETFs that offer low-volatility features. For example, you may want to consider the Invesco S&P 500 Low Volatility ETF (SPLV), which holds 100 securities from the S&P 500 Index with the lowest volatility over the past 12 months.

P.S. Where can you still find solid growth opportunities in this volatile and risky market? We can sum it up with a single word: takeovers.

In this era of war, inflation and pandemic, corporate consolidation is the name of the game. Even the whisper of a mega-merger can hand investors enormous returns. My colleague Nathan Slaughter just pinpointed a potential takeover deal that could dwarf them all.

Want to get in on Nathan’s next big trade? Click here for details.