If you’ve been on summer vacation the past week, you may have missed a nice (and long overdue) market bounce. The S&P has rallied 12% since July 14, while the Nasdaq has tacked on about 15%.

After suffering through the worst first half in over half a century, the major indexes have started the second half on the right foot. And I’m pleased to report that many of our holdings over at Takeover Trader are taking full advantage. As often happens, the laggards have suddenly become the leaders.

It’s a sign of the times when a key inflation gauge reads 8.5%, and the market breathes a sigh of relief. Of course, that kind of number would normally send investors scurrying for cover.

To be sure, July’s Consumer Price Index (CPI) still reflects an alarming uptick in the price of food, shelter, transportation, and other basic necessities. But… the pace has cooled slightly from June’s increase of 9.1%. 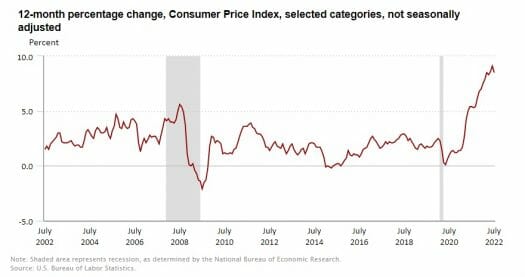 That deceleration means inflation has backed off a bit from 40-year highs and may have peaked. That’s little consolation to anyone in the grocery store checkout aisle right now (the price of Lay’s potato chips has surged 38% over the past year).

Still, a journey of a thousand basis points begins with a single step.

I don’t think it will do much to sway the Fed or alter its aggressive rate tightening course. Looking at July’s robust payroll report (528,000 new jobs created with continued upward pressure on wages), even some of the more dovish committee members see the target Fed Funds rate climbing at least another point by year’s end to the 3.5% range.

Nevertheless, the milder-than-expected CPI print has given traders an excuse to rally. The Dow enjoyed a 500-point gain on Wednesday, while the Nasdaq advanced even more in percentage terms. For now, at least, investors can pivot and re-focus their attention elsewhere – like second-quarter earnings.

According to FactSet, three-fourths of S&P 500 companies have topped analysts’ targets. However, the average growth rate has softened to 6.7%, and that figure falls into negative territory if you exclude the buoyant energy sector. In other words, companies that aren’t selling oil are struggling right now. 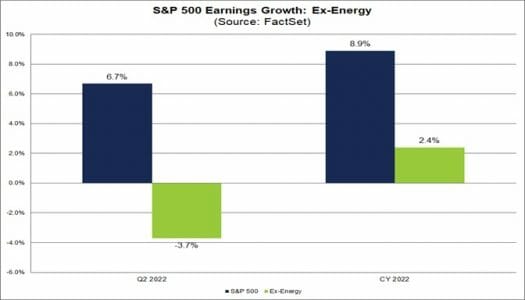 Fortunately, most of our holdings have managed to buck the trend. Take our e-commerce fulfillment specialist holding, which reported a healthy 55% increase in earnings and operating cash flow while booking $475 million in new contract wins – a new record high.

Elsewhere, our cyber-security takeover play is basking in the warm glow of a nice double-digit bounce following yesterday’s stellar numbers. The company, which helps clients safeguard against inside hacking attempts, picked up 250 new customers last quarter and posted a powerful 144% increase in quarterly subscription revenues. It has now forged relationships with over 7,000 global customers, including half of the Fortune 500.

Even with a possible recession, global cybersecurity spending is expected to rise another 11% this year to $190 billion. So it’s easy to see why private equity acquirers are circling this group. Google parent Alphabet has also been on the prowl, bidding $5.4 billion a few months ago for Mandiant.

All of this to say, there remain some highly attractive targets out there, despite the earnings picture. And there will always be takeover targets that we can profit from, too.

Speaking of which, I’ve been telling my premium readers that I think Amazon is about to drop a bombshell that will send waves through the financial media…

The company has been on a takeover spree lately. But I think their next target will be its biggest yet – and shares of the company in question will likely take off and never look back.