At the end of the day, there are really only two ways for a social media company to grow revenues: either attract more users or squeeze more income from the ones you already have.

Why do I bring this up?

After a string of bad press and faltering ad sales (partly due to changes from Apple), Mark Zuckerberg decided to rebrand the company. Not only that, but he’s going “all in” on developing the company’s vision for the metaverse. It’ll take years and cost billions – and that’s if it even works.

There’s a lot of drama surrounding Twitter (Nasdaq: TWTR), too. After years of stagnation, it looked like the company might have found a savior in the form of Tesla founder Elon Musk. But after a series of false starts, Elon Musk and Twitter are headed to court.

What’s more, I’m noticing a broad slowdown in ad spending. It has spread from online media to more traditional players such as broadcasters and publishers. But research outlet eMarketer projects that internet advertising will still surpass $250 billion next year.

As one of the most immersive and effective mediums, social media typically grabs 30 cents from every dollar of digital ad sales.

The social media company I’ve got my eye on doesn’t get near the attention of either of these two names. But it’s quietly putting its head down and focusing on squeezing more out of what it has – and those efforts are beginning to bear fruit.

Let’s dive into some key numbers so you can see what I’m talking about.

Quiet Execution On All Fronts

Pinterest’s global base of monthly active users (MAUs) has plateaued at 433 million. In fact, the number of regular site visitors has actually slipped by about 5% over the past year. Thus, management is keenly focused on that second growth route.

And those efforts are bearing fruit.

Average revenues per user (ARPU) have climbed 17% over the past year to $1.54 last quarter. Multiply that figure by the 433 million active users, and you get total quarterly revenues of $666 million. That’s an increase of approximately $53 million (or 9%) from last year’s period.

In North America, ARPU has risen by 20% and now stands at $5.82. That’s a solid figure, but there is still plenty of room for improvement – and even more so overseas. Excluding Europe, Pinterest is only fetching $0.10 per user around the rest of the globe.

Consider that more than half of the users (223 million) reside outside the U.S., Canada, and Europe. Fortunately, this has been the fastest-growing segment, with ARPU jumping 80% last quarter. Still, monetization of this key group has only just begun.

Some simple math says that every additional dime coaxed per user in foreign markets outside Europe would generate an additional $22 million in quarterly revenue.

That’s not the only positive catalyst in play. Pinterest is gradually morphing from a social media site into a formidable e-commerce platform filled with “shoppable” items. Of course, it’s easier to attract sellers when you have half a billion highly engaged monthly visitors — particularly when their shopping preferences can be so easily categorized and targeted.

The average Pinterest user hops on the site about 37 times per month. Because the intuitive app is designed to match content to users’ unique styles and interests (be it knitting or gardening or mountain biking), an effort is underway to make Pinterest a personalized digital mall.

This army of users isn’t just idly looking at pictures of wedding cakes. They are clicking the “buy” button, blurring the line between social media and e-commerce. Approximately 15 million users have already bought an item on the Pinterest site. But that’s only 3% of the user base – meaning 97% is still untapped.

In the meantime, the company has already generated $645 million in free cash flow over the past year. 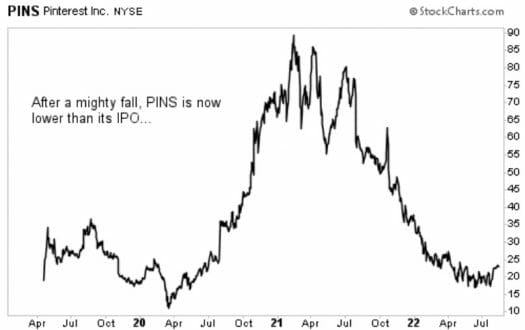 The market had some lofty expectations for PINS for the past couple of years. But I think the recent positive momentum in the stock is set to continue — that is, unless a buyer comes along…

Pinterest has quadrupled over the past five years from 100 million to more than 400 million users. And management is getting better and converting that heavy site traffic into profit. Potential acquirers will also appreciate the firm’s rock-solid balance sheet, which boasts $2.6 billion in cash and securities against zero debt.

PINS has been on the move, gaining 34% since late July. Swiftly rising ARPU deserves some of the credit. But investors are also intrigued by the revelation that an activist investor with $50+ billion in assets (Elliott Management) has accumulated a sizeable 9% stake in the company, touting its “unique position in the advertising and shopping ecosystem.”

We will see how this shakes out. Elliott has a private equity division called Evergreen Coast Capital that is known to bid on the targets of activist campaigns. PayPal has also expressed interest, although those talks appear to have fizzled.

For now, PINS remains a rare example of what happens when a social media company puts its head down and focuses on execution. I consider it a worthwhile addition to any growth-minded investor’s portfolio.

P.S. I’ve been telling my premium readers that I think Amazon is about to drop a bombshell that will send waves through the financial media…

The company has been on a takeover spree lately. But I think their next target will be its biggest yet – and shares of the company in question will likely take off and never look back.