Market Sentiment May Have Shifted, But The Fed Still Looms Large…

Stocks have managed to turn higher the past couple of days. Still, the fierce selloff that began three weeks ago has clipped about 8% off the major averages, undoing much of the progress made in July and early August.

The bulls do have some ammo on their side, not the least of which is the addition of 315,000 new jobs to the payrolls last month. The service sector of the economy also remains a pocket of strength.

The ISM Non-Manufacturing PMI, a key gauge of service activity, has risen to 56.9, outpacing expectations for a reading of 55.5 (50.0 is the dividing line between expansion and contraction). While retail struggles are well documented, consumers have been shifting discretionary spending towards experiences. This will favor travel, entertainment, and other leisure sectors.

As I’ve told my premium readers before, I think these are more than temporary shifts brought on by Covid. And as such, they are (and will continue to be) key areas of focus for us over at High-Yield Investing.

Despite those encouraging data points, nothing has shaken concerns that we are headed for another round of aggressive rate tightening. The Fed has suddenly become more forcefully hawkish than I can ever remember and remains steadfast in its fight against inflation – even at the risk of fanning recessionary flames.

Fed watchers have become accustomed to reading between the lines and scrutinizing the most nuanced phrases for clues. There’s no need for that right now, not with Chairman Jerome Powell rather bluntly declaring that the current course will bring “pain to households and businesses.”

After a pair of three-quarter point hikes (the most aggressive in thirty years), the Fed Funds Rate currently stands near 2.5%. And there is an 86% probability that we will see another such move at the next meeting. The President of the Cleveland Federal Reserve has gone on record, saying that short-term rates will need to climb above 4.0% and remain there indefinitely to restore price stability. 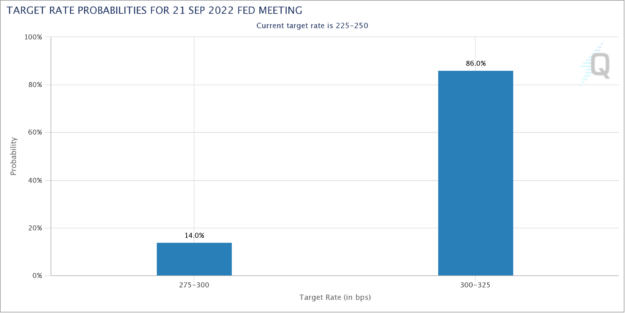 Any talk of the Fed adopting a neutral stance after five straight hikes has died down. That appears to be off the table. In Powell’s own words, quashing inflation will require a “purposefully restrictive” monetary policy. That means more tightening.

Of course, you could argue that the Fed’s inaction last year is what got us here. But either way, the central bank is now determined to rein inflation back towards its 2% comfort zone. And that could create more headaches for investors.

It’s Tough Out There…

Anyone who has opened a 401(K) statement knows it has been a tough environment. But just how bad are we talking in historical terms? Well, this little nugget just might add some context.

You may have heard of the 60/40 portfolio. This refers to a balanced mix of 60% stocks and 40% bonds, a good rule-of-thumb allocation for many investors. According to Bank of America, that strategy would have yielded a 19.4% year-to-date decline. For the record, that would be the worst 60/40 performance since 1936.

That’s right. We haven’t seen this kind of punishment in both the equity and fixed income markets since the Hoover Dam was under construction. 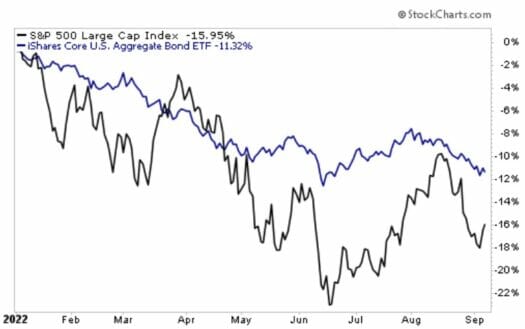 The benchmark S&P 500 is down 16% for the year. That means bonds – which typically provide ballast during heavy investing seas – have actually been even more volatile. It’s exceedingly rare for stocks and bonds (often negatively correlated) to simultaneously deliver negative returns for extended periods. Usually, when one group zigs, the other zags.

I don’t bring this up to scare you. As they say, there’s always a bull market somewhere.

The challenge for investors is to adapt and find out what’s poised to work in this environment. I already mentioned the theme of “experiences” over “things”. I will pick up on that theme (as well as others) in the coming days.

For now, remember that we need to have a long-term mindset when it comes to investing. And as such, we shouldn’t let the daily swings of the market affect us too much. But we do need to keep our ear to the ground and be responsive to the ever-shifting environment.

In the meantime, if if you want to compound your wealth the easy way, then you need to have a handful of safe, reliable dividend payers in your portfolio…

In my latest presentation, you’ll learn about five safe, high-yield stocks with a proven track record of rewarding investors with more income year after year regardless of what’s happening in the market.