The Beauty Of “Legal” Monopolies (And 2 Of My Favorites)

They’re one of the safest ways to compound your wealth over time.

In fact, outside of Series I Savings Bonds, which I talked about back in April, I can’t think of many things that offer this kind of comfort for investors.

And before you think they don’t exist, they do. Trust me on this. And when you find one that you can invest in, it’s a no-brainer. That’s because the few businesses with this advantage are among the richest companies in the world. And they only seem to get richer with every passing year — much to the enjoyment of their investors.

The Beauty Of “Legal” Monopolies

Unlike a traditional monopoly, many “legal” monopolies have operated with this advantage for decades without a peep from the government. They come in many shapes in sizes, but one thing is clear: their monopoly-like advantage gives these rare companies an enormous leg up on their competition.

Over at Capital Wealth Letter, my premium subscribers and I always look for legal monopolies. In fact, our latest pick enjoys its own legal monopoly… and is even trying to monopolize another industry.

But it’s not the first pick like this we’ve made… And to show you just how lucrative these legal monopolies can be, I’m going to give you a few examples from our previous picks.

CME Group provides a marketplace where buyers and sellers can get together to buy and sell futures contracts. Since its humble beginnings over 170 years ago, the company has morphed into the world’s largest derivatives marketplace.

The company’s rock-steady revenue streams are shored up by a dominant industry position in a sector with major barriers to entry. After all, setting up a complex network and exchange for derivatives isn’t like opening up a lemonade stand.

CME’s futures offerings span everything from interest rates and equities to foreign exchange and agricultural commodities… energy, metals, and more. Every day, CME is the intermediary for millions of options and futures contracts. The outcome of these trades doesn’t really matter to CME, either. They’re taking a cut no matter what.

Its monopoly-like business has handsomely rewarded shareholders over the years. Just take a look at how it has performed since it was first added to the portfolio in August 2014: 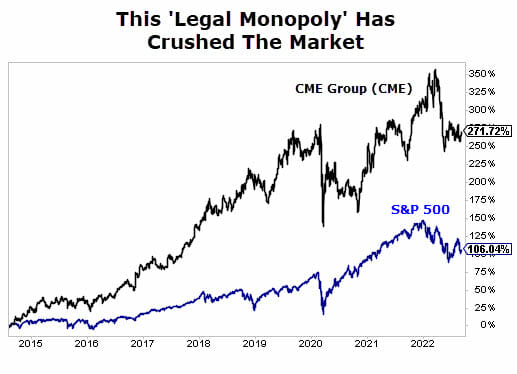 CME Group has crushed the S&P 500 since we first added this company. Think about everything that’s happened since 2014…

CME generates so much money that it joyfully shares those profits with shareholders through regular quarterly dividends as well as highly underrated special dividends, typically paid out in December. Last year, it paid shareholders an extra $3.25 per share. That’s in addition to the four $0.90 per share dividend payments.

Another company with a legal monopoly is Visa (NYSE: V).

Visa needs no introduction. It is a massive global payment network that dominates the market for electronic payments along with its peer, Mastercard (NYSE: MA).

Visa accounts for roughly half of all credit card transactions and nearly three-fourths of debit card transactions. When I recommended it to my premium readers in December 2016, I explained why it should be a mainstay for almost any portfolio.

The reason is simple: Visa acts like a “toll” booth operator for the consumer economy.

It’s one of only a handful of companies that have built, operate, and own a network for processing credit card transactions, which would be incredibly difficult to replicate. And in return, Visa collects a fee for each and every transaction it processes.

Take one look at its performance since we added it, and you can bet that shareholders have been extremely happy with their investment. 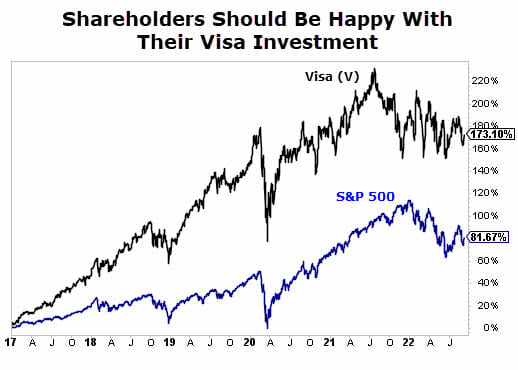 Of course, CME and Visa aren’t the only legal monopolies out there. But they don’t exactly grow on trees, either. That’s why it pays to dedicate a serious portion of your time to finding them.

While most people would point to dozens of different reasons for why these two names did so well… it all comes down to their status as a legal monopoly.

Nothing is more important to their success.

Think about what those returns I cited earlier mean… Investors have watched the market swing up and down for over a decade. They’ve dealt with trillions in government printing and spending, a cut in America’s credit rating, wars, pandemics, and much more…

Yet investors in legal monopolies don’t really have to worry too much about all those things. They just sit back and watch their investment grow year after year.

That’s not to say there weren’t down periods for these stocks. There certainly were. No stock ever goes straight up. But every time CME Group got thrown out with the bath water, for example, I pounded the table to buy more. More often than not, it would have turned out to be a great decision.

That’s because legal monopolies are some of the most stable names on the market. And more often than not, they beat the market hands-down while growing their business year after year.