With mortgage rates touching 6% (the highest level since 2008), there has been a steep falloff in new home loan applications and refinance activity. According to the Mortgage Bankers Association, new mortgage activity recently sank to a 22-year low.

Not anymore. Almost 20% of today’s home listings (one-in-five) have recently been marked down to lure buyers. And many home hunters are probably biding their time waiting to see if prices continue to sag.

To put the steep drop-off in mortgage activity into context, here are some numbers…

Mortgage originations peaked in Q1 2021 at a value of $1.3 trillion, according to Freddie Mac. Refinancing activity accounted for about 70 percent of the total.

Homeowners continued to take advantage of historically low rates throughout the year, refinancing for a total of $2.8 trillion in 2021.

Fast forward to this year, and refinancing activity totaled just $212 billion in Q2. That’s down by a staggering 75 percent from the peak.

With mortgage rates at their highest since 2008, it’s just no longer advantageous to refinance. And while purchase activity remains high in dollar terms, that’s largely a function of higher prices. 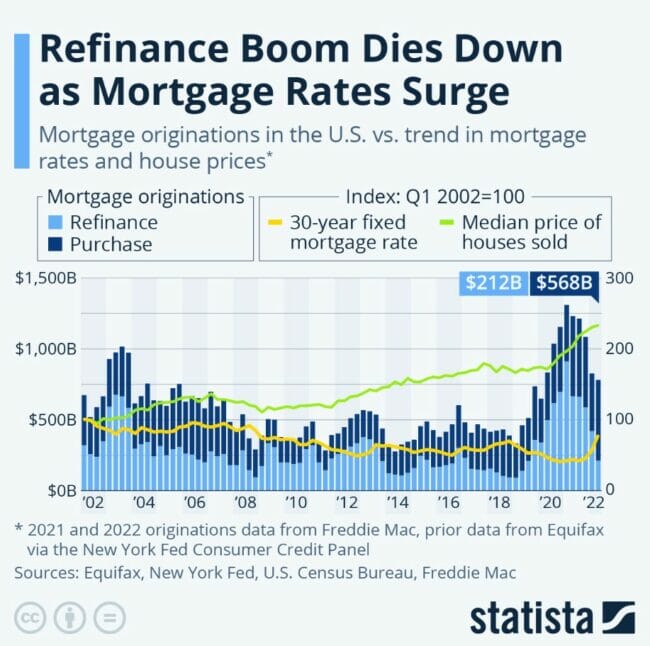 How This Affects My “Tollbooth” Pick

Longtime readers may remember FNF as my “toll booth of housing” pick.

I first profiled it back in March 2020, right in the middle of the Covid-fueled selloff — and I’ve circled back to it a few times since then.

For a refresher, title insurance helps indemnify buyers and lenders (up to the value of the property or loan) in case of a real estate dispute. This is one of those miscellaneous closing cost fees tacked on to the bottom of your mortgage loan. But they add up.

FNF is the No. 1 provider of title insurance and escrow services, representing about a third of the market. That means if you’re a homeowner, there’s a one-in-three chance you did business with FNF or one of its subsidiaries when you closed on your home and signed all those documents.

We added FNF to my High-Yield Investing premium service back in March 2020. The market was in a tailspin back then, and we took advantage of panicked selling. The stock had been cut in half, falling from $40 to $20 in a few days.

The market was acting as if the world was going to stop. And, yes, it might have in a way (just for a bit), but that never really threatened the title insurance business. On the contrary, when you consider what the Fed did later by slashing interest rates to near zero, it set the stage for an epic boom in home purchases and refinancings.

But today, it’s a different story.

Transaction volume at FNF has taken a hit, although fees are on the rise. Title revenues only slipped 7% last quarter to $2.8 billion. But earnings are off 30% from last year’s levels, with margins slipping to 19% from 23%.

On the bright side, annuity sales have been robust, helping to pick up the slack. The firm’s F&G subsidiary (which will soon be spun off to shareholders) attracted more than $3 billion in annuity inflows for the quarter and now has $40 billion in assets under management. Earnings in this segment have benefited from higher rates, climbing nearly 40% last quarter to $128 million. 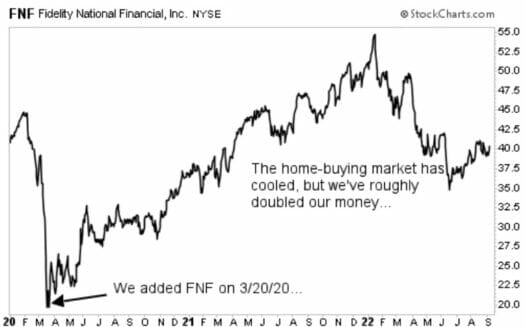 FNF is a dominant leader in an attractive niche. That’s one of the reasons why I added the stock to our High-Yield Investing portfolio back when it seemed like the world was going to hell in a handbasket. But macro headwinds are gathering, and the stock isn’t as attractive as when we first took a position.

We timed our purchase on this one just about perfectly. In hindsight, we may have held on for a bit too long, but I will take a 95% total return in just over two years any time I can get it.

There will be other ways to play the housing market down the road. Right now, I’m particularly interested in how interest rates are affecting the booming rental market. In fact, in my upcoming issue of High-Yield Investing, I’m going to profile a pick that allows us to profit from this trend.

In the meantime, if you’re hunting for income, then it pays to look beyond the usual suspects…

That’s what my subscribers and I do each month over at High-Yield Investing. In fact, many are earning thousands in extra income each month — enough to live a comfortable, worry-free retirement. If you’d like to learn more, go here now.