Breaking Down The Fed Announcement, And What It Means For Us…

Nearly four weeks ago, according to the Wall Street Journal, Fed Chair Jerome Powell was… frustrated.

The market was rallying after the Fed hiked interest rates by 75 basis points in July. Powell was due to give a keynote speech in Jackson Hole, Wyoming in a couple of days, and he decided to throw what he had written in the garbage and start over. (You can read the article here.)

The result was a clear, brief, and direct message. In it, he invoked former Fed Chair Paul Volker, and said he would do whatever the central bank could to bring about lower inflation.

If that brought about a recession, so be it (my words).

That’s why there was never really any mystery about yesterday’s announcement from the Fed. In fact, the latest CPI reading, which showed inflation levels still near 40-year highs, practically set it in stone. The only question was whether we would maybe get a surprise 100-basis-point hike.

Instead, we got what most economists expected — another 75 bps hike. That will raise the federal funds rate to a range between 3% and 3.25%, a level we haven’t seen since early 2008. The vote was unanimous among the Fed’s voting members.

As I’ve discussed before, what you want to pay attention to when these announcements are made is the Fed’s projections, including the so-called “dot plot”. 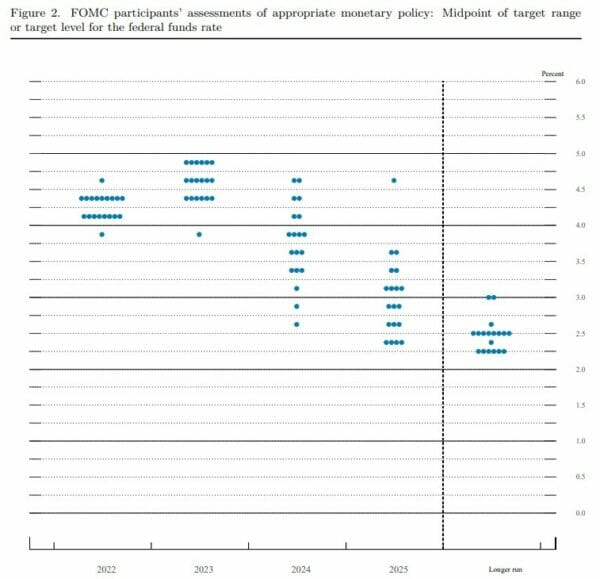 On that front, officials project a rate between 4.25% and 4.5% by the end of the year. This implies a further 1.25% in total hikes between the next two Fed meetings left on the calendar.

Among other projections, Fed members see a “terminal rate” of 4.6% in 2023. This means that the pain would be over and rate hikes would end with another quarter-point hike — that is, if the path outlined above is followed.

Back in March, when the Fed hiked rates for the first time since 2018, here’s what I wrote:

The Fed is in a tough position here, and policymakers will need to thread the needle with both the timing and amount of rate hikes. Raise too little (or too slowly), and inflation will only get worse. Raise too much (or too quickly), and it risks plunging the U.S. economy into a recession.

It’s clear now that Powell and Co. aren’t worried about the last sentence in that statement. They’re committed to bringing down inflation no matter the cost. And while that’s good news for consumers worried about inflation, it’s also going to be painful for anybody looking to borrow money to build a business or purchase a home.

That’s not news if you’ve been in the market for a house (or have simply seen the headlines). But let’s take a moment to explain why…

As you probably know, rising interest rates cause bond prices to fall, and bond yields to rise. The 2-year Treasury yield, which is more sensitive to policy decisions, crossed 4% in the aftermath of the Fed’s announcement.

Meanwhile, the 10-year Treasury yield more closely impacts fixed mortgage rates. That’s because fixed-income investors will often compare the “risk-free” rate of return they can earn on a 10-year Treasury relative to assets like mortgage-backed securities. And while the yield curve between “2s and 10s” is inverted right now, the 10-year yields about 3.7%.

So, by necessity, mortgages need to offer more to investors.

In fact, mortgage rates are the highest they’ve been since November 2008. According to Freddie Mac, the average rate for a 30-year fixed mortgage was 6.02% in the week ended September 14. 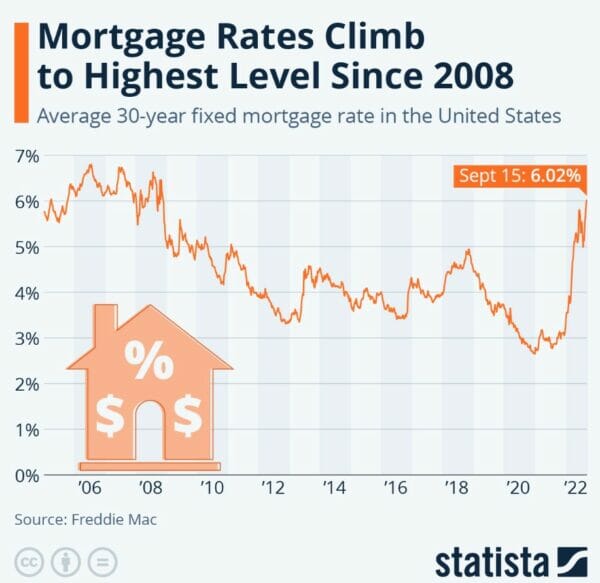 We’ll see what the official numbers are at the end of this week, but right now I’m staring a quote of 6.47% on my screen. Ouch.

Of course, that’s pushing more buyers out of the market. The Mortgage Bankers Association expects new originations for standard home loans to plunge to $2.2 trillion this year, half of the $4.4 trillion from 2021.

“For real estate markets, the rising costs of borrowing are further cooling demand for homes and deepening the affordability crisis,” George Ratiu, Senior Economist at Realtor.com said in a statement. “The buyer of a median-priced home is looking at a monthly payment of $2,100 at today’s mortgage rate, a 66% jump from last year.”

We’ll stay on top of this and other important news as it develops. As my colleague Nathan Slaughter recently pointed out, there will be other ways to play the housing market.

In fact, in the latest issue of High-Yield Investing, he wrote about how interest rates are affecting the booming rental market. And his latest pick is in a perfect position to profit from this trend.

Editor’s Note: If you’re hunting for more income in this market and are tired of the usual suspects, then you need to see Nathan Slaughter’s latest research…

In it, you’ll learn about 12 ultra-generous dividend payers that put more money in your pocket. And the best part? They pay dividends monthly.