It’s the closest thing to being “the house” in a casino full of gamblers. It also happens to be one of the most reliable ways to generate income in your investment account on a monthly basis.

Basically, this investment approach captures income by selling call option contracts, which speculators purchase in hopes that they will generate outsized returns as stock prices advance. By selling these call options, we allow these speculators the chance to make large profits, while we collect high-probability income payments.

Here’s how the covered call process works… We purchase shares of stock the same way a traditional investor would. We then sell call option contracts against these shares (one for every 100 shares that we own). Selling these contracts obligates us to sell our stock at the option’s strike price, provided the market price is above this level before the option expires.

This approach puts a cap on our potential return. Regardless of how high the stock trades, we still have to sell at the strike price. However, since we are receiving a payment from selling the call contract, known as a premium, this income is very reliable and gives us a much higher probability of a positive return on our investment. So the covered call approach sacrifices the potential for a very high return in exchange for a more stable, reliable income stream.

Let’s say that in January, you own 100 shares of XYZ stock, which trades at $100. Over the course of the next month, you don’t believe that XYZ will trade for more than $105. You could sell an option on IBM for $105. Suppose that an XYZ Feb 105 option sells for $3. By writing this option, you will receive $3 today (or $300 total, since each option represents an interest in 100 underlying shares).

As you can see from the diagram, you are limiting your upside to $8 in return for a guaranteed $3 premium. If shares of XYZ tank, then your losses can still be significant — but you will be $3 better off than if you had merely held the stock alone. 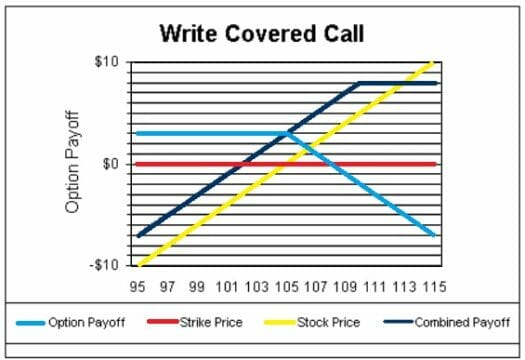 – XYZ trades at $110 at expiration. In this scenario, you were too conservative in your estimate of where IBM would trade this month, so will have to sell 100 shares to the buyer of the call option for $105 each. The net impact is $105 (for selling the stock) + $3 (for selling the option) to yield $108. This is your profit no matter how high XYZ’s shares soar. So, you have limited your upside potential, but in return, you received $300 for the sale of the option contract.

– XYZ trades at $103 at expiration. In this scenario, you were accurate in your estimate. You are not obligated to sell your shares because the buyer would not want to buy them at $105 when they could purchase them in the open market for just $103. The net result is that the you generates $300 in additional income while still keeping your shares, which also gained $300 during the month.

– XYZ trades at $95 at expiration. In this scenario, you suffered a $5 loss on the stock, but this loss is offset by the $3 premium received for writing the call. You will still hold your shares, and will have lost just $200 in total (compared with $500 if you hadn’t sold the call option).

Choosing Which Call Option Contract to Use

Option contracts are available on a monthly (and in many cases, weekly) basis, giving us more choices in terms of which contracts we want to sell. Traditional call option contracts expire on the Saturday after the third Friday of each month.

When implementing a covered call trade, we must choose an expiration date. Typically, the more time left until expiration, the higher the price will be for the call option. This contract is more attractive to buyers. That’s because a longer time horizon allows the stock more time to trade higher, giving the owner a greater chance to profit. From our perspective as call sellers, a higher price means that we receive more income from selling the contract.

While more income is certainly desirable, we need to always think about how much time is required for the trade to be completed. So while we may set up a covered call trade that pays us an 8% return over the course of the next six months, that return might be less attractive than a 4% return that would be completed in just two months’ time.

As a general rule, we typically like to sell call options that expire over the next four to eight weeks. These contracts tend to offer the best per-year rate of return because they expire relatively quickly. Once the contracts expire, one of two things will happen. We will either be obligated to sell our stock and will then have the capital available to invest in a new covered call setup, or the calls will expire worthless and we will have the option of selling additional contracts to create more income.

While this relatively short-term approach can yield very attractive rates of return, the strategy embraces a bit more risk depending on the strike price of the calls. This is because the stock could trade significantly lower while waiting for the option to expire. And because shorter-term contracts are sold at a lower price, we don’t have as much income from selling this contract to offset the potential losses in the stock.

During turbulent, high-risk market environments (especially during bear markets), it sometimes makes more sense to sell longer-term option contracts. Remember, the longer the time frame, the higher the price for the call options. So by selling longer-term contracts, we are collecting more income.

This way, even if the stock trades a good bit lower, we have more income to offset the losses in the stock. Of course, selling long-term contracts can have a drawback as well, namely that our capital is tied up in the trade for a longer period. This is especially frustrating if the market begins to move sharply higher, because our gains are capped by the covered call structure.

On balance, however, longer-term covered call trades make sense. During periods of uncertainty, the additional income and increased stability may be well worth the risk of missing out on the next leg higher. As is usually the case with investing, the protection of capital should be your first and foremost concern, with the appreciation of capital being the secondary objective.

Using longer-term option contracts during high-risk periods gives you a chance to continue to collect reliable income. It also protects your initial capital and bypasses much of the volatility that traditional stock-only investors must endure.

P.S. If you want to discover a simple strategy that could turn every Friday into a payday, then you need to turn to our colleague Jim Fink...

A renowned trader, Jim has developed a proprietary investing method that consistently beats Wall Street in markets that are going up, down or sideways.

In this new “tell all” interview, Jim Fink reveals how he hit 626 winners in 647 closed trades. Click here to watch now.