Earlier this year, I told my premium readers a little bit about my family’s trials in the housing market. We sold our house and were looking for the perfect spot… only to see a number of properties we were interested in slip through our fingers.

We ended up moving out of state and couldn’t be happier with where we ended up. But let’s just say I don’t plan on doing anything like that again anytime soon.

We may not be able to even if we wanted. That’s because the housing market dynamics are shifting dramatically from where they were a year ago. And it could have major implications for the economy and the market.

According to Bloomberg, median home prices in San Francisco have vaulted to $1.89 million.

Your money will stretch much further in Omaha, Nebraska. Just for fun, I found an updated 4 bedroom, 3 bath split-level home that can be yours for just $309,000.

In aggregate, balancing the highs of San Francisco against the lows of Omaha, a nice American home costs approximately $449,000 these days. Half of all homes sell for more; half sell for less. Just two years ago, the median home price stood at $322,000. As you can see from the chart below, prices have been on a steady uphill climb for decades but have really skyrocketed (moving almost parabolically) since the pandemic.

That might be more manageable for homebuyers if mortgage rates were stable. But they aren’t. In fact, they have been rising even faster than home prices. According to Freddie Mac, the average rate for a 30-year loan rose to 6.29% last week, the highest they’ve been since the 2008 financial crisis.

How much does the higher rate affect your house note? Well, let’s crunch some hypothetical numbers.

Combined, the uptick in borrowing costs and the uptick in home prices are placing a huge burden on prospective homebuyers. Before Covid, an average home under an average mortgage would have cost about $1,100 per month. Today, the same property would run $2,150. That’s over $1,000 more per month or $378,000 over the life of the loan. And that’s before you include property taxes or homeowners insurance.

Add it all up, and countless buyers are being priced out. Those with means are still balking at the increased cost, putting their plans on hold for now. Of course, housing costs only tell us half the picture. It’s the ratio between cost and income that truly matters.

From another angle (again using median figures), the typical house note eats up about 35% of the standard paycheck, up from a historical average of 25%. Payment-to-income ratios haven’t been this skewed in 37 years.

No wonder mortgage activity has come crashing down. The Mortgage Bankers Association forecasts new originations to plunge to $2.2 trillion this year, half of the $4.4 trillion from 2021.

The Case For The Rental Market

Yet, 10.1 million new households formed over the last decade alone. And these people have to live somewhere (mom and dad’s basement isn’t always the best solution). If you guessed that renting was becoming more commonplace, you’d be right. It didn’t happen overnight. This generational macro trend began decades ago…

In 2004, homeownership rates in the U.S. peaked at 69%. Data from the Census Bureau reveals that this percentage has since shrunk to 64%. The subprime mortgage crisis (and subsequently tightened lending standards) played a role, but the abovementioned factors will only accelerate this shift.

For some, it’s not purely a financial decision. Homeownership rates are sharply lower for Millennials than Gen Xers were at the same age. And Gen Xers lagged behind Baby Boomers. Part of it just boils down to a difference in lifestyle choices. A recent poll found that regardless of savings, nearly one-in-five Millennials intend to be “forever renters.”

Developers are responding to this with purpose-built gated communities of rental homes. One of the newest in San Antonio, called Pradera, is filled with hundreds of three and four-bedroom homes. Business Insider points out that the average household income in this upscale rental neighborhood is more than $100,000.

Single-family homes (SFH) have become the newest rage for institutional investors. They started out small, scooping up a few units here and there after the last housing crash left many properties in foreclosure or trading at distressed prices. But money chases returns, and private equity groups like Blackstone (flush with financing from yield-hungry investors) have since stepped up their acquisitions, creating a brand new asset class.

Publicly-traded entities have popped up as well. These corporate landlords have been buying nearly 100,000 homes per quarter, accounting for a sizeable percentage of the total available stock. One of the largest, Invitation Homes (NYSE: INVH), now owns 82,758 single-family homes. At four people per home, that inventory could house the entire population of Tampa, Florida. 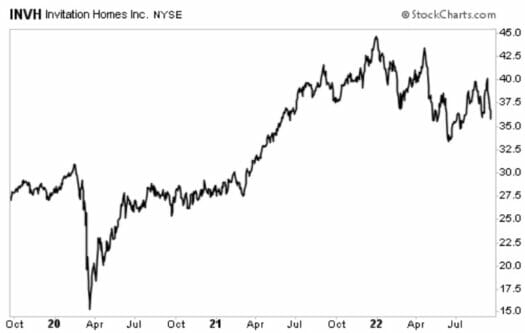 This portfolio will likely appreciate in value over time as home values tend to rise. In the meantime, steady rental income from all these properties is supporting a growing annual dividend distribution of $0.88 per share.

There’s a lot to like with INVH. Unfortunately, the current 2.3% yield falls short of my 4% minimum for High-Yield Investing.

So, for now, I’ve got my sights set on another segment of the residential rental market: multi-family. Apartments are benefiting from the same long-term tailwinds – which explains why median rents climbed 17.6% nationally last year while vacancy rates dropped to a mere 4%.

Don’t just take my word for it. Warren Buffett himself made a ringing endorsement for this productive asset class, saying, “ If you offer me 1% of all the apartment houses in the country (for) $25 billion, I’ll write you a check. It’s very simple.”

There are a number of choices in this asset class for investors. (I’m saving my favorite pick for my premium readers.)

But whether we’re talking about single-family or multi-family, investors would be wise to look into the rental market. This is a powerful trend that’s likely to stick around for quite some time.

In the meantime, if you’re hunting for income, then it pays to look beyond the usual suspects…

That’s what my subscribers and I do each month over at High-Yield Investing. Many are earning thousands in extra income each month — enough to live a comfortable, worry-free retirement. In fact, in my latest report you’ll learn about five “bulletproof” high-yield stocks that you can own for the long haul, no matter what’s going on in the rest of the market.