We’re at the midpoint of earnings season. And to say that it’s been volatile would be an understatement.

That means the S&P 500 is on track to report its lowest year-over-year earnings growth since Q3 2020.

Only four of the 11 sectors are reporting positive earnings growth, led by energy (of course), along with real estate and industrials. Meanwhile, the Communication Services, Financials, and Materials sectors are among the seven sectors lagging. 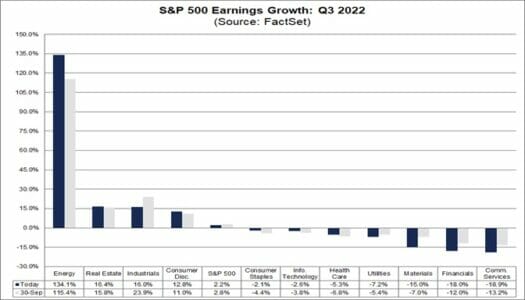 Operating income fell 46% last quarter, and the company guided for $30-32.5 billion in revenue for the fourth quarter — which would be the third straight quarter of sales declines.

Shares of META fell 25% on the news — the stock’s largest decline in eight months, erasing $80 billion in value. The stock has had quite the fall from grace — down by more than 70% this year. That’s $676 billion in market cap, gone.

Still, CEO Mark Zuckerberg believes that the future of the company lies in the metaverse. He’s plowing billions into the company’s Reality Labs division, which may take years to bear fruit. In the meantime, Zuckerberg has lost more than half his wealth.

Not to be outdone, Amazon (Nasdaq: AMZN) fell roughly 20% after-hours yesterday after missing revenue expectations. Revenue of $127.1 billion for the quarter fell short of the $127.63 billion expected. Revenue for the company’s cloud segment also fell a bit short. But the real disappointment was the retail behemoth’s revenue guidance for the fourth quarter: between $140 billion and $144 billion. Analysts were expecting guidance of $155 billion.

We’ve seen similar (though perhaps not as drastic) reactions across much of the tech landscape (Microsoft and Google parent Alphabet are two more examples.) Big tech, which operates internationally, is being slammed by the strong dollar. Meanwhile fears of inflation, rising interest rates, and a recession are also weighing on the sector. The lone, albeit faint, bright spot: Apple.

As the chart below shows, roughly $700 billion in market cap value has been destroyed since Tuesday — from just five names in the tech sector. 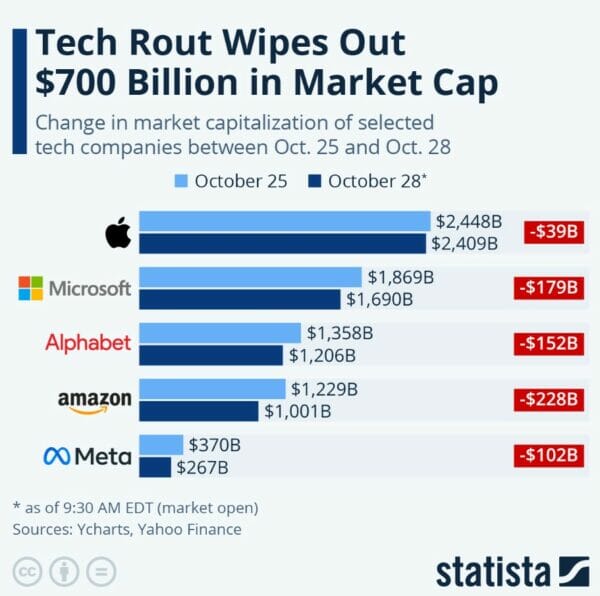 As we continue to digest results this earnings season, it’s important to remember a few key things…

First, as my colleague John Persinos pointed out yesterday, Alphabet, Amazon, Apple, Meta Platforms, and Microsoft together account for 20% of the S&P 500 index. Collectively, their Q3 performance disappointed, which sent their stocks down by an average of 9% on the day of their earnings release.

So while Big Tech has defined much of the market (for better or worse), it’s important to remember that it isn’t everything. There are plenty of names out there that are performing admirably in this challenging environment.

We’ll continue monitoring the market as the earnings season progresses. But the next major catalyst for bulls could come courtesy of the Federal Reserve. The Federal Open Market Committee (FOMC) is expected to announce another interest rate hike on Wednesday. But the market will be keenly tuned to the “dot plot” survey of Fed voting members’ expectations for future rates and Fed Chair Jerome Powell’s press conference.

In the meantime, if you’re looking for one of the most significant moneymaking opportunities we’ve seen in years, then you won’t want to miss this…

A Special Event You Won’t Want To Miss…

Legal weed stands at the biggest tipping point in history, with just a handful of days left before the midterm elections.

If you’ve been waiting for the right moment to profit from pot stocks, this is it… John has spent the last couple of years researching and chronicling this emerging sector in meticulous detail — and he’s got the inside scoop on how investors can profit.

The event is free to any investor who wants to attend.