This job takes me to all known corners of the business world. One week, my readers and I are exploring gold mines in Brazil. The next, we are delving into cybersecurity or farmland.

But recently, I got tell my premium subscribers about a topic near and dear to my heart: beer.

I’m a big beer fan, and not just the lukewarm, mass-produced stuff chugged from a red solo cup (although I’ve certainly downed my share). It may have started years ago with an eye-opening German hefeweizen. Ever since, I have developed an appreciation for the rich history, the endless variety, and the nuanced flavors of premium, handcrafted ales and lagers. You know them better as craft beers.

My vacations have always involved treks off the beaten path to sample the creations of local microbreweries. That’s a much easier quest these days. The number of microbreweries operating in the United States reached 3,000 in 2014, topped 5,000 in 2016, and stands at more than 9,000 today. I haven’t visited them all – not yet.

As an avid homebrewer, my trophy case has a gold medal or two taken home from various festivals and competitions. I also happen to be a certified and credentialed BJCP beer judge. But as an investor, even my hobbies are viewed through a financial lens.

Spotting the potential of the burgeoning craft beer movement, I decided to take things to the next level. In 2012, I opened a retail store called Brewniverse dedicated to all things beer. Rare imports. Cold growler fills. Proper Glassware. Homebrew supplies and equipment. I’m proud to say it was later recognized by Men’s Journal as one of the “Fifty Best Beer Stores in America.”

I’ve since moved on from that endeavor. But it did leave me with a much deeper understanding of the $100 billion beer industry. So there’s no pun intended when I say that opportunity is brewing.

M&A In The Beer Industry

We all know that M&A activity can be highly contagious in certain industries. Beer is a prime example. Years of consolidation have concentrated market share among a tight oligopoly of dominant players. Heck, even the parents of mortal enemies Budweiser and Miller merged a few years ago through a massive $100 billion transaction. (To satisfy anti-trust requirements, the latter was divested to Molson Coors (NYSE: TAP) shortly after.)

But those pesky craft breweries have been steadily chipping away. After years of double-digit growth, they sold 24.4 million barrels in 2021 and now account for more than 26.8% of industry sales by dollar. 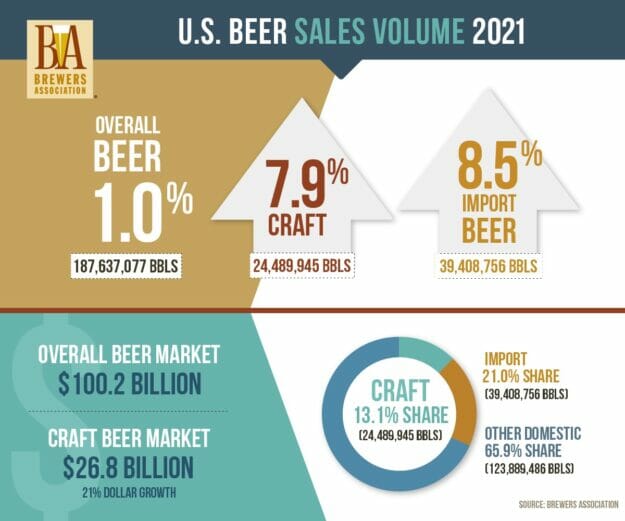 If you can’t beat them, buy them.

Seeing a new avenue of growth, AB Inbev has been assimilating small, independent brewers left and right. That started with Chicago’s Goose Island in 2011, followed by Colorado’s Breckenridge, Seattle’s Elysian, and Houston’s Karbach, just to name a few. Then just before Covid, the Clydesdale breeders paid $320 million ($16.50 per share) to acquire Red Hook, Kona, and Widmer, otherwise known as the Craft Brew Alliance.

Meanwhile, MillerCoors got into the game with the takeover of regional favorites such as Terrapin and Revolver. Not to be outdone, Constellation Brands (NYSE: STZ) sunk a jaw-dropping $1 billion into San Diego’s Ballast Point, maker of the famed Sculpin IPA. Dutch conglomerate Heineken took control of California’s Lagunitas, shipping it out as far as Japan.

And so it continues.

Long before any of this happened (back in the days when bars and restaurants only had three tap handles), a newcomer was emerging on the scene. This was decades before hazy IPAs, fruited sours, and bourbon-barrel aged stouts became all the rage. Along with Sierra Nevada (founded in 1980), it quickly became a refreshing alternative for drinkers and helped launch the craft beer revolution that continues to this day.

But the company became a victim of its own success. It’s not a giant industrial macro brewer, but few see it as a microbrewer anymore, either. It occupies a no-man’s land somewhere in the middle. To be sure, this brewer still has a loyal following – with prominent placement in just about every major liquor store or supermarket from coast to coast.

The company suffered a string of quarters showing slowly declining sales before righting the ship late last year. Through no fault of its own, the tired brand may have simply reached a natural plateau.

But that’s exactly why the company has branched out into new product lines. The latest innovation: ready-to-drink (RTD) cocktails made with vodka and other spirits. Think canned Margaritas or Moscow Mules. This niche segment has exploded, growing 1,000% in 2020 by some measures. That growth was artificially boosted by pandemic lockdowns, but the breakout category remains hot. According to Nielsen, RTD sales spiked 126% last year and continue to benefit from the long-standing shift from beer to spirits.

With a dizzying array of choices, winning over new drinkers isn’t easy. The bigger players in this space are always searching new growth avenues. And while creating new product lines is an option, it’s usually easier to buy a smaller craft brewer or a smaller international rival.

That’s why I expect the wave of deals in this industry to continue — and why my top pick may find itself in the crosshairs of an acquirer.

I won’t reveal the name of my pick today, out of fairness to subscribers. But I think the ready-to-drink cocktail craze is a new, early-stage growth catalyst building across the industry. It could trigger the next leg of growth in the larger beverage companies – or entice them to snap up a smaller rival. Investors would be wise to take notice and research the players in this space further.

Editor’s Note: In these uncertain times, investors would be wise to seek opportunities that are insulated from risks like inflation, rising interest rates, recession, and geopolitical strife.

In that respect, beer-related stocks pass the test. People will always want a nice cold beer, in good times or bad.

Another option worth considering: pot stocks.

With just a handful of days left before the midterm elections, legal weed stands at the biggest tipping point in history. If you’ve been waiting for the right moment to profit from pot stocks, this is it… John has the inside scoop on how investors can profit.