Notorious boxer Mike Tyson famously said, “Everybody has plans until they get hit for the first time.”

Right now, investors are getting smacked around. For many, this is their first punch in the proverbial mouth. 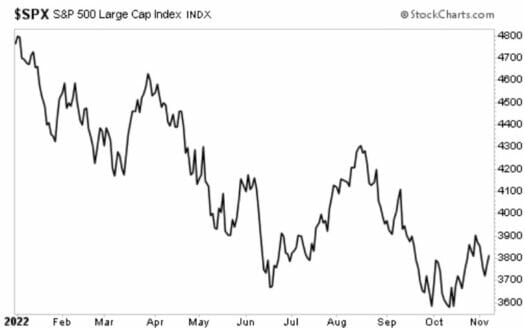 The bear market has been going on for the better part of a year. And it’s testing investors, both novice and veteran alike. It has been a stark reminder that bear markets take no prisoners. Maybe you’re one of the many investors with a handful of holdings that are deep in the red. And with earnings season underway, those stocks have really been taking it on the chin the last couple of weeks.

Right now is a great case study in investor psychology. And how you react will make or break your future wealth.

Investors Are Throwing In The Towel On Tech…

I’ll address the bigger picture in a moment. But to understand what I’m about to tell you, let’s consider what’s happening lately with a well-known (and widely-held) stock like Google parent, Alphabet (Nasdaq: GOOGL).

This is another holding that took a punch to the gut. The stock fell nearly 10% after announcing third-quarter results recently. EPS of $1.06 missed expectations by 20 cents, and revenue also missed the market. Quarterly sales came in at $69 billion, just shy of the $71 billion that Wall Street was expecting.

But that’s just part of the story. Investor sentiment and enthusiasm has evaporated from GOOGL. So far this year, the stock is down 40%. 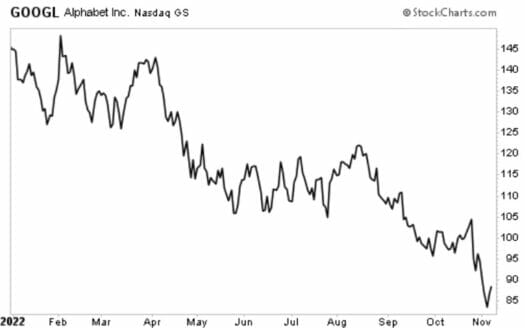 I see this stock’s selloff as a gift.

This company is a screaming deal right now. Could it go lower? Sure. And if it does, I’ll continue to buy more. Here’s why…

Here are my two cents on what’s happening with the big tech stocks, most of which took a dive after reporting earnings at the end of October. (Specifically, I’m talking about Alphabet, Meta Platforms (META), Microsoft (MSFT), and Amazon (AMZN))…

Tech stocks were the first in the market to dive, starting last year. But the selloff was mainly in pandemic winners like Zoom Communications (ZM), Shopify (SHOP), and a bunch of other high-flying tech stocks.

We are going to call this group of tech stocks the soldiers. They were at the front of the line leading the charge — and were the first to get shot. While the soldiers were all getting blasted, the generals — Alphabet, Microsoft, and Amazon — were holding up just fine. Even reaching new highs. So investors fled from the soldiers to the generals.

Well, now the generals are being shot, which I see as a major sign of capitulation in sentiment for these stocks. It could mean that we might be nearing the end of this bear market. So, while it might suck to see the profits you once had in many of these holdings evaporate, I also know that it’s giving us an opportunity to buy some of the world’s best companies at bargain prices.

Alphabet is one of those companies. Come to me when people stop using Google, Android phones, Chrome browsers, and stop watching YouTube. Until then, Alphabet will be just fine.

What We Know About Bear Markets…

You see, it doesn’t matter how prepared you thought you’d made yourself. If you’ve got a million-dollar account that falls by $400,000 in a 40% drawdown… you are in panic mode. You’ve been hit. When investors sign into their brokerage and retirement accounts and see balances shriveling, fear and uncertainty overcome them. The primal parts of your brain kick in. Your pulse quickens. And if you don’t calm yourself down, you start flailing and making frantic — and often unwise — decisions.

In order to succeed, you need to keep your emotions in check. It’s not easy, but here are a couple of things to keep in mind when you log into your account and see red…

First, bear markets don’t last long. They tend to flush out and find their bottom faster than you think (even though it feels like an eternity). Historically, the average bear market lasts 14 months, with a -36% drawdown. We’re currently at 9 months and a -28% drawdown. 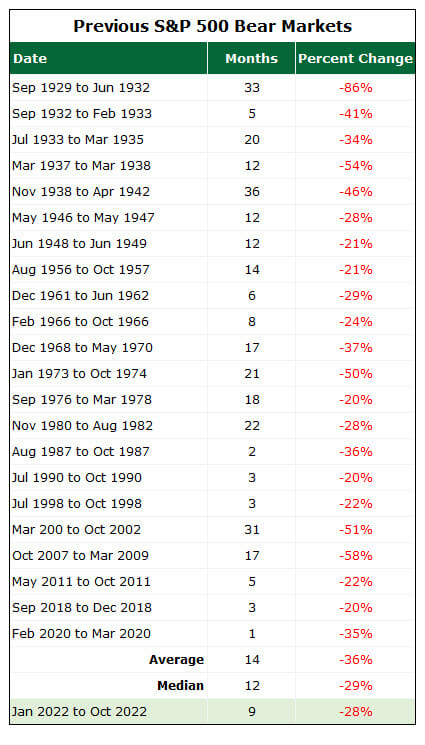 Markets obviously fall quicker than they go up (investor fear and emotions play a large role). It’s why you’ll often hear the old market saying, “stocks take the stairs up and the elevator down.”

The second thing to keep in mind is that we will likely only see the market bottom when it’s already behind us. The stock market isn’t going to wait for an “all clear” signal to start rising again.

This means we don’t need to wait until inflation has subsided, the Fed stops hiking rates, or a recession happens. The market moves past all these threats much faster than we humans do.

Finally, remember that there will be a tremendous opportunity when the dust settles. We may already be there with companies like Alphabet. While we can’t say for sure, we can reasonably figure that we’re closer to the bottom than not — and that there will be a lot more good days ahead than bad.

But many people will be too afraid to jump at these opportunities. They don’t want to get punched in the mouth again. But those who are willing to take some punches now and keep their composure will be rewarded for their boldness.

Editor’s Note: On Tuesday, voters in several states decide whether to legalize recreational marijuana. Polls show that these initiatives are all popular with voters. In fact, my colleague John Persinos has been telling his followers that the legalized marijuana business is at the biggest “tipping point” in history…

That’s why John just launched a brand-new service detailing how you can financially benefit from the legalization of cannabis. Called Marijuana Profit Alert, it’s your guide to making money from this emerging megatrend.