Last week, I wrote about the growing momentum in the energy sector. In that piece, I said that the momentum — along with a more disciplined approach by the key players in the sector — should give traders and investors alike a sense of renewed optimism.

But there are other factors at play, too. And today, I want to focus on two big ones.

If anyone wasn’t paying attention before, the first one came into crystal-clear focus on September 26.

That’s when two powerful explosions ruptured a pair of underwater natural gas pipelines more than 200 feet below the surface of the Baltic Sea. Those pipelines — Nord Stream 1 and 2 — run between Russia and Germany.

You may have seen images of the methane gas bubbling to the surface for a week. It was the largest-ever detected release. 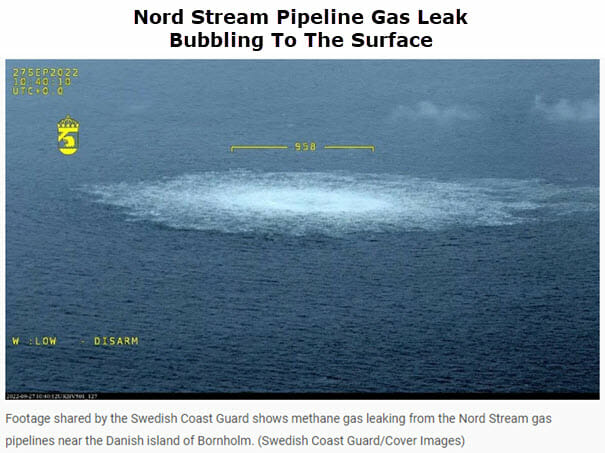 It’s unknown exactly how this happened or who is to blame. One thing everyone can agree on is that it was no accident.

These pipelines are some of the world’s most important energy arteries. Running parallel to each other, the two pipelines stretch roughly 745 miles from the Russian coast near St. Petersburg to northeastern Germany. The Nord Stream 1 pipeline hasn’t transported any gas since August, when Russia shut it down.

Europe gets roughly 40% of its natural gas from Russia, so these outages are deeply troubling… especially with setting in…

Europe is in a bit of a predicament. Since Russia invaded Ukraine in February, America and many European countries have been supplying Ukraine with what it needs to fend off the invasion.

Russia has used its vast oil and gas reserves as a weapon against Western Europe. Russian President Vladimir Putin hopes to inflict enough pain that the Europeans grow weary of supplying military equipment to Ukraine and sanctioning Russia.

Putin’s strategy has put a serious dent in the pocketbooks of European consumers. Natural gas prices in Europe are eight times higher than their 10-year average. Roughly 20% of Europe’s power comes from natural gas, which translates into higher electricity costs.

We’re not talking about just a little hike in electric bills, either. We’re talking about electricity bills so high that businesses can no longer afford to keep the lights on.

People have burned their power bills at demonstrations in the Czech Republic, Italy, and the United Kingdom. Germany has had to reactivate some of its coal-fired power plants to help soften the blow — even though they’ve been committed to phasing out coal as a power source by 2030.

The bottom line is that the sabotage of the Nord Stream pipelines has put Europe — and much of the world — in a global energy crisis.

Europe can’t easily switch suppliers. It’s not like they can switch their “oil” membership from Sam’s Club to Costco. Its reliance on Russia for energy is coming back to haunt them.

You see, Saudi Arabia and the oil cartel known as OPEC have cut their output to help prop up prices. Recently, OPEC+, which includes Russia (formed in 2016 along with 11 other non-OPEC members), announced it would slash 2 million barrels a day from production.

Australia and Qatar produce a lot of natural gas. But Australia is too far away, and most Qatari volumes are locked into long-term contracts — mostly to Asian buyers.

Canada’s energy reserves are trapped in “oil sands,” which are difficult and expensive to extract. Mexico and Brazil lack the infrastructure to really crank up enough production to fill the void left by Russia.

Venezuela has massive reserves and decent infrastructure. But it’s still Venezuela — a government that’s not reliable, and a tough country to do business with… unless you’re China. Venezuela is dependent on China — they’ve loaned more money to Venezuela than any other country. China is also the largest importer of Venezuelan oil.

That leaves only one nation that can conceivably pick up the global energy slack: the United States.

The Energy Sector Is (Still) Dirt-Cheap

I’ve laid out the reasoning of why oil prices will likely stay elevated, if not go higher — the Russia-Ukraine war… Nord Stream pipeline explosion… and the major void left by Russia and its impact on Europe’s dire need for oil and gas.

But that’s not the only reason we should be bullish about the sector. It’s also still dirt-cheap.

Many energy companies are generating massive sales and profits while offering mouth-watering dividend yields. The sector yields just under 6% currently. And energy has been the market’s top-performing industry in this otherwise dismal year.

Yet, the energy sector trades for a P/E multiple of less than 9 — below eight if you are looking at earnings estimates for the next year. Other metrics confirm this, too (price-to-sales ratio of less than one, price-to-free cash flow of less than 10, etc.).

But here’s the thing… the market doesn’t seem to be recognizing any of this.

In other words, while there have been some fantastic gains in this sector, there could be more to come. So you haven’t missed the boat yet — there’s still time to profit from energy stocks.

That’s why, over at Capital Wealth Letter, I introduced my premium readers to one of the best, most profitable U.S. oil and gas companies on the planet. It operates in the most productive oilfield in the world and can pull that oil and gas out for cheap.

I also plan to share more thoughts on the energy sector in coming days… including an idea or two for how investors can profit.

By now, you’ve seen the headlines. The commercialization of outer space is happening… fast. And we think Elon Musk will continue to lead the charge, thanks to his latest project. It’s already rolling out across the globe, and it’s going to change the lives of millions of people (and make a fortune in the process).

But there’s just one problem… It’s currently “off limits” to regular investors… Fortunately, we’ve discovered a little-known “backdoor investment” that can get you in on the ground floor, TODAY. (Without this secret partner, Starlink will never get off the ground…)