As we get ready to close the books this year, I’ve been having conversations with our expert analysts about how their picks have fared and what they expect to see in 2023.

Of course, we don’t have crystal balls. But we wouldn’t be doing our job if we didn’t try to use some level-headed analysis to skate to where the proverbial puck is going to be.

In fact, longtime readers know that’s what our annual Predictions report is all about. And it just so happens that my colleague James Butts and his team are putting the finishing touches on this hotly anticipated report as we speak.

For those who don’t know, this is one of the most sought-after pieces of research we put out all year. That’s because it’s also usually the most profitable.

But like I said, we’ll have to save that for later. As we head into the Christmas season, it’s a time of reflection. And despite what was generally a bad year for the market, there were still opportunities to make great money this year.

On that note, if you’ve profited from our recommendations this year, I’d love to hear about them. Drop us a line here. We love celebrating big wins with our readers.

In the meantime, Jimmy recently reviewed how he and his subscribers fared in 2022 over at Capital Wealth Letter. So I decided to sit down with him for a chat…

Before we jump in, I’d like to ask… any big Christmas plans this year?

Not exactly. But that’s just fine by me… My wife and I will be loading up the kids and heading to my childhood home for Christmas this year. I always enjoy visiting my hometown, even if it’s blistering cold (our highs will be around 12 degrees with a low around negative 10 degrees).

It’s a small village smack dab in the middle of nowhere. The three nearest towns are all an hour’s drive away. And mind you, these aren’t thriving metropolises I’m talking about… The population of these places is 122, 473, and 3,190. The nearest “city” is a two- and a half-hour drive away, and its population sits just under 67,000.

Like I said, it’s in the middle of nowhere. The cows handily outnumber humans.

But it’s a beautiful little town. Settled in a valley surrounded by some of the state’s tallest peaks with a thriving river slicing through it.

I’m looking forward to it because it’s like a time warp when we visit. Life slows down. People aren’t rushing to and from work. Folks will gather at the gas station with a cup of warm Joe and talk about hunting, fishing, or how their crops or cattle are doing. A stark contrast to the financial, economic, political, or inflation news that inundates my daily routine.

I have to give you some credit… You said back in January that it would be “challenging” for stocks — and you were spot-on. How did you position your readers for what was to come?

Thanks, I appreciate it. When 2022 kicked off, we were coming off a stellar year in terms of performance. We closed out 2021 with a 33% return over at Capital Wealth Letter. That topped the S&P 500’s stellar 27% performance.

Analysts were calling for another good year in 2022 from stocks. Many Wall Street firms predicted that the S&P 500 would return nearly 10% this year. But I wasn’t as optimistic…

In January, I said, “there are certainly warning signs that indicate we could be in for a very rude awakening.”

As it turns out, the market already peaked (on January 3rd). And by January 26th, we were already experiencing our first correction (defined as a pullback of at least 10%).

The Dow Jones Industrial Average has held up the “best” of the major indexes. It bottomed in October, down nearly 22% on the year, but has staged a furious rally since then. The index is down just over 7% on the year. 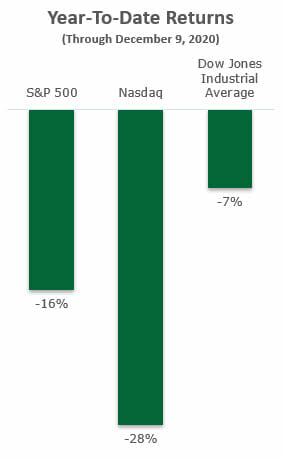 So the red flags I saw in January turned out to be true. Fortunately, we were able to prepare for what I thought would be a difficult year in stocks. And one of those things we did right was take profits on some winners we already held in the portfolio from previous years:

Of course, not every pick we’ve made this year has worked out. But a few big winners, primarily in gold and energy, have more than offset those losses — which is why we’re beating the S&P 500.

I know you’ve already weighed in on what’s going on in the cryptocurrency world, but I have to ask you… is there any future in this space for investors?

Yeah, it’s not looking pretty right now. If you think it’s been a tough year for stocks, cryptos have been even worse.

In 2021, I predicted that Ethereum would be a “game-changer” in the crypto world. It had promising technology, the most use cases, and some major brainpower behind it. And it went on to gain 400%…

But this year, I tucked my tail between my legs and exited out of our two cryptocurrency holdings (Bitcoin and Ethereum). I’m disappointed to say we closed both for big losses.

It began with talk about a “crypto winter” as the values of every cryptocurrency tumbled. Well, the crypto winter got colder this summer when stablecoins like TerraUSD collapsed virtually overnight. We saw crypto hedge fund Three Arrows Capital disintegrate from a $10 billion firm to zero.

And, of course, most recently, we’ve had the FTX collapse- a firm that was valued at $32 billion at one point. The founder, Sam Bankman-Fried, was recently arrested and denied bail. I wrote about the FTX debacle here.

But that doesn’t mean it is the end of crypto. I just think the crypto winter will last a bit longer than many originally believed (including me). And when the dust settles, we will jump back in. But until then, our money is best invested elsewhere.

On the other end of the risk spectrum, you wisely recommended buying Series I Savings Bonds as an inflation hedge back in April. As you know, the Fed just raised rates yet again — so are they still worth a look?

It was just such a no-brainer. Thanks to soaring inflation, I Bonds were a lucrative investment and about the closest thing to a “free lunch” as you’ll find in the investment world.

For those who don’t know, those rate changes happen twice a year: May 1st and November 1st.

The November 1st rate change brought the rate back down to 6.89% annualized. That is still quite good. It is still worth maxing out the $10,000 investment per person (per year) if you have extra money sitting around. Remember that you are locked in for one year, and if you cash in before five years, you’ll lose the latest three months of interest.

I Bonds are meant to keep pace with inflation, which is still near 40-year highs. But the recent inflation data (the latest CPI reading was 7.1%) indicates that maybe, just maybe, peak inflation is behind us.

If that is indeed the case, then the rate on I Bonds will continue to drift down (along with inflation). It will also make I Bonds a little less attractive going forward compared to just buying regular Treasury Bills, which offer maturity dates of 4, 8, 13, 17, 26, and 52 weeks. Recent auction results for a 13-week T-Bill clocked in at 4.3%.

You can purchase T-Bills at TreasuryDirect.gov, where you can also purchase I Bonds. The other bonus about T-Bills is there is no maximum (only a $100 minimum).

Editor’s Note: Our colleague Nathan Slaughter has found a small Texas company that just discovered one of the largest natural oil reserves of ALL-TIME…

This company is set to uncork nearly a billion barrels of oil, unleashing a once-in-a-lifetime opportunity for massive gains.

But if you want in, you need to make your move now… because this company could have its name splashed across the financial news any day now, sending share prices surging and slamming the door shut on this opportunity for good.