Avoid These Widely-Hyped Stocks Owned by Millions of Investors

I first warned readers about these stocks last month. Since then, many of them have fallen — including one that fell 25% and another 27%.

Now, recent actions by some of the companies in this industry have solidified my opinion. I’m still convinced millions of investors are running the risk of losing money in a situation that’s eerily similar to one that caused trillions of dollars in losses a decade ago.

You’ve no doubt heard the news about recent multibillion-dollar Internet IPOs. “Web 2.0” companies such as Groupon, Zynga, LinkedIn and Facebook are the hot topic of Wall Street right now. The mainstream financial press can’t get enough of them. For example, Facebook has dominated the headlines for months, even though it won’t go public until May.

Yet despite all the hype, I’m convinced investors will be best served by avoiding these stocks right now…

As I told you back in March, these stocks have traded at levels reminiscent of the technology bubble in 2000. Zynga lost $1.40 per share in the past year, yet until a few weeks ago, the stock was showing a gain since its IPO. Groupon has lost $350 million in the prior 12 months. And LinkedIn, while showing a profit, trades at a price-to-earnings (P/E) ratio close to 900 right now.

Unfortunately, a flurry of news reports coming out about many of these companies paints a grim picture for investors. I believe millions of investors are running the risk of losing money, especially with the upcoming Facebook IPO, which will draw a lot of attention and could mean sky-high valuations.

It all boils down to one thing. I believe that if you want to consistently make money in the stock market, you have to focus on the companies that show a dedication to rewarding their investors. And I haven’t seen this group of companies take these steps.

Take, for instance, Facebook’s purchase of the photo “app” company Instagram. I’m not a mobile app expert. But I don’t think you have to be to realize something is very wrong when one company shells out $1 billion for another company that didn’t even exist two years ago. This price tag means Instagram is worth roughly $83 million per employee. For comparison, Apple (Nasdaq: AAPL), arguably the most successful company on the planet, is only worth $9.3 million per employee.

I’m just not sure how a company such as Facebook can be a good investment when it makes expensive acquisitions like that. I simply don’t see these moves as being in the best interests of their future shareholders.

Then there is mobile-gaming company Zynga (Nasdaq: ZNGA). The company’s stock had been soaring despite the business not earning a profit. Then in late March it announced that company insiders were selling 43 million shares of their personal stock, worth over $500 million. That’s not very reassuring. Since then, the shares are down 25%.

Groupon (Nasdaq: GRPN) is down 53% from the first week of November, when it raised $11 billion in a highly celebrated IPO. That sell-off accelerated in late March after the company had to restate fourth-quarter earnings, resulting in lower revenues and profits (and a shareholder lawsuit).

In fact, of the three Internet stocks I mentioned a few weeks back, both Zynga and Groupon are down more than 25% since then. 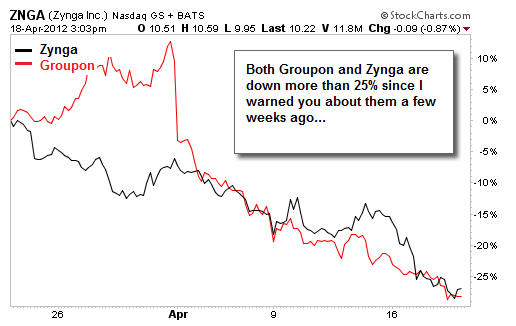 LinkedIn is the only stock that’s up (and the only company showing any profit). Even so, the shares trade at a P/E of 890. I still want nothing to do with the stock.

Don’t get me wrong, I’m not saying companies such as LinkedIn and Facebook are going to go bankrupt. On the contrary — these businesses have high margins, which may one day help them become attractive investments.

But to me, it’s clear that these stocks are still one of the riskiest places for your money right now.

Action to Take — > That’s why I believe the best way to get wealthy in the stock market is by owning companies that dominate their markets, are essential to our way of life, and that continually reward their shareholders with dividends and share buybacks.

When you start looking into the new breed of Internet stocks, there are few of these traits to be found.

[Note: For companies that dominate their markets and put investors first, don’t miss my latest presentation — Forget Facebook… Buy This Instead. I’ve identified 10 market-dominating companies that you can buy today, and basically hold for the rest of your life… including one company that holds more than $130 per share in cash on its books (and it’s not Apple). To read more, visit this link.]