I counted twice, just to be sure…

That’s the amount in “daily paychecks” — more commonly known as dividends — I received from my investment portfolio in 2012. That total comes to $167.81 for each day of the year. Cash.

Why am I telling you this?

It’s not to brag. I was born and raised in Wisconsin. The typical Midwestern mentality is so ingrained in me, I very rarely talk about money. And I’m not one to show off, either. I drive a Nissan I bought eight years ago. I get my hair cut at Supercuts.

No, I’m telling you this because I honestly think what I’ve discovered is the single best way to invest, hands down.I’m talking, of course, about the “Daily Paycheck” strategy. If you’ve read StreetAuthority for even a couple of weeks, you’re likely familiar with Amy Calistri and this strategy.

Amy is the Chief Strategist behind our premium newsletter, The Daily Paycheck. Her goal is to build a portfolio that pays at least one dividend every day of the year. The idea for her advisory came from my personal “Daily Paycheck” experiment.

I’ve been following the strategy personally for more than five years now. In that time, I’ve not only been able to build an investment portfolio that pays me more than 30 times a month, but the checks are getting bigger and bigger as time passes. 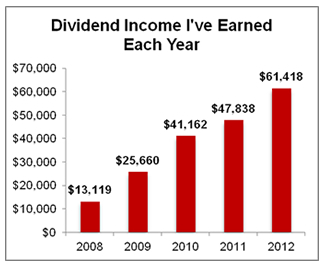 What I like best is that it’s the easiest way to invest you can imagine. Once you get started, it runs on autopilot. Of course, you’ll make a few portfolio adjustments now and then, but you won’t have to anxiously watch your holdings every day.

Now it’s time to come clean. If you start this strategy tomorrow, it’s unlikely you’ll be earning $167 a day by the weekend.

I’ve been fortunate to start with a healthy-sized portfolio. And as I said, I’ve enjoyed the benefits of implementing the “Daily Paycheck” strategy for more than five years now, so my payments have grown much larger than when I started.

But here’s the good news… it doesn’t matter. Whether you have $2,000 or $2 million, you can start your own “Daily Paycheck” portfolio today. The results are fully scalable, and anyone can have success, as long as you follow four simple rules Amy and I created to not only build our portfolios, but also manage risks…

1. Dividend payers beat non-dividend payers.
According to Ned Davis Research, firms in the S&P 500 that paid dividends gained an average of 8.7% per year between 1972 and Sept. 30, 2012. Those that never paid them gained less than 1.6% per year over the same time span.

2. Dividend growers beat dividend cutters.
A company that can afford to consistently increase its dividend is a company that knows how to grow the cash that it generates. Finding companies with a strong track record of dividend growth is so important, it can even trump yield.

For instance, one of Amy’s first purchases for The Daily Paycheck portfolio was telecom giant AT&T (NYSE: T). At the time, AT&T had an above-average yield of 5.8%. She passed on rival telecom company Frontier Communications (Nasdaq: FTR) — even though it was offering a whopping 13% yield. Why? AT&T had a solid dividend growth record and Frontier didn’t. It was that simple.

Since then, Frontier cut its dividend twice, while AT&T has increased its dividend four times. Frontier has lost investors 23.7% including dividends, while AT&T’s total return has been a lofty 59.0%.

3. Reinvesting your checks beats cashing them.
When you reinvest your dividends to purchase more shares, those new shares generate even more dividends. More dividends buy even more shares. Dividend reinvestment is the engine of compound growth and is one of the reasons why my dividend checks — and my portfolio — continue to grow.

In the chart below, you can see how much more income your portfolio can generate if you employ the simple strategy of dividend reinvestment.

4. Monthly payouts beat an annual payout.
Getting paid monthly is not only more convenient — you actually earn more. Thanks to compounding, a stock paying out 1% monthly yields far more than 12% — it can actually pay you 12.68% if you reinvest.

I’ve used these four simple rules to build a portfolio that not only paid me $167 a day in 2012, but that is also seeing rising payments. Just last month, I earned 31 checks, at an average daily amount of $205.48.

I’ve been investing for the better part of two decades. During that time, I’ve tried just about every strategy and style you can imagine. And don’t get me wrong — you can make money any number of ways in the market.

But earning thousands of dollars each month consistently? I never experienced that until I implemented the “Daily Paycheck” strategy.

P.S. — My ultimate goal is to build a portfolio that pays me $10,000 a month in cash. In June I pocketed $6,164.45, so I’m well on my way. To learn how easy it is to set up your own “Daily Paycheck” portfolio, be sure to read this memo. It has all the details on how to get started yourself.