The Best Is Yet To Come For This Movie Stock

There is little doubt that Hollywood loves 3-D. According to the website BoxOfficeQuant, 3-D movies make an average of $3.69 at the box office for every dollar of production costs. That is almost 50% more than the $2.51 in box office sales for 2-D films.#-ad_banner-#​

But lately it seems that some of 3-D’s luster has worn off. “Pacific Rim” was a flop, and would-be blockbuster “The Lone Ranger” attracted possibly one lone moviegoer. Growth in worldwide 3-D screens slowed to just 27% last year — respectable, but well off 2009’s growth of 255%.

With few real blockbusters this year, 3-D or otherwise, cinema operators are looking like a bust. But that is exactly when you should start looking at the sector for the best of breed.

Like Warren Buffett, I like to be greedy when others are fearful. In fact, the best company in the industry is down more than 8% from its 52-week high and almost a quarter off its 2011 peak.

After looking through Hollywood stocks like Lions Gate Entertainment (NYSE: LGF) and Cinemark Holdings (NYSE: CNK), I found a company that doesn’t have to stake its future on a blockbuster movie. Nor does it have to worry about competing with some upstart new studio. It has strong patent protection coming from a new system that could change the way 3-D movies are viewed.

Beyond all this, this company is one of the strongest plays on emerging China that I have seen.

New Life For 3-D
Last year, nearly half of U.S. and Canada moviegoers saw at least one movie in 3-D. About a third of North American screens are digital 3-D, a percentage that holds fairly consistent across the rest of the world with 38% in Asia and 35% in Europe. 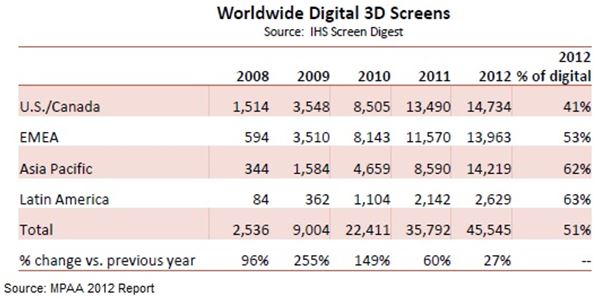 Despite the growth in 3-D movies over the past decade, the trend seems to be slowing — but that might not matter. Just 17% of the $10.8 billion North American box office is from 3-D movies. Increase 3-D’s share of the market to even a quarter, and you add $864 million in total box office sales.

About 45% of 3-D moviegoers are under the age of 17, meaning that the industry could have its own demographic boom coming. When I see this kind of potential growth in a market that has sold off on the catalyst of a poor summer movie season, I look to the leader in the segment — and the undisputed leader in 3-D movies is IMAX (NYSE: IMAX).

The company is currently using its rolling-loop projectors whose patent expired in 1988. These have been copied by other theaters like Cinema Technologies to varying degrees of success. That’s about to change though because IMAX bought 10,000 projection patents from the Eastman Kodak bankruptcy and plans to debut a new laser system in 2014.

Beyond a superior quality experience, the technology will cut costs because the company will no longer need to use expensive analog film. The new system will be patent-protected for 10 years and could mean an additional $200 million in annual revenue, according to IMAX CEO Richard Gelfond.

Why do I like IMAX over competitor theater operators like Cinemark? Beyond the significant patent protection and other catalysts, IMAX is about the experience. Like Starbucks (NYSE: SBUX), it has built its business around more than just going to the movie but around the experience of being drawn into the story through an immersive large-screen format.

Eyes On China
On top of the new laser system due next year, IMAX is positioned to take advantage of the rising Chinese consumer class. Both Walt Disney (NYSE: DIS) and China’s Dalian Wanda Group are planning theme parks in the People’s Republic, both to include investments in movie areas.

Shanghai Disney is scheduled to open in December 2015. If Disneyland and Disney World are any indication, the park will have an IMAX theater and could significantly boost revenue.

But Disney had better hurry. China’s richest man Wang Jianlin plans on opening his own $4.9 billion theme park in 2017. Last month, China’s Dalian Wanda Group brought out a host of Hollywood A-listers, including Nicole Kidman and Leonardo DiCaprio, to unveil plans for an $8.2 billion film studio complex. The group is the world’s largest theater owner and has agreed to an additional 40 to 120 new IMAX theaters in China and increased lease terms from 10 to 12 years.

The bottom line: China’s annual box office receipts are expected to surpass the North American market by 2018 and double that by 2023.

Not Just Kids’ Movies And Action Flicks
The space thriller “Gravity” dominated the box office for three weeks in a row, bringing in $170 million in domestic sales. The opening weekend for the movie brought in $15.1 million for IMAX, just over a quarter of the total 3-D box office. “Gravity”‘s success at the box office and with critics could have studios re-evaluating other movies for 3-D.

“Gravity” is more significant for 3-D and IMAX than just its box office sales. Typically, action movies and kids’ movies have dominated the 3-D market. Gravity shows that 3-D can be used in genres like suspense and drama. I am not saying that producers are going to rush into the medium, but it definitely is a potential catalyst — one that may not yet be priced into IMAX’s shares.

Beyond the possibility for films in new genres to be made for a 3-D and large-screen format, the next two years promise a strong lineup of traditional 3-D fare. At least seven movies are based on Marvel superheroes, and “Star Wars: Episode VII” is slated for 2015.

Institutional investors and insiders are betting on the company with 84% of the shares outstanding, including a 10% ownership by guru investor Douglas Kevin. More than 16.5 million shares (29%) are sold short and could provide a near-term upside support as sales and sentiment improve.

I expect 2013 revenue estimates of $281 million will be upgraded on the success of “Gravity,” and IMAX could blow 2014 estimates out of the water with its expected lineup of films. At 2014 earnings of $1.20 a share and a conservative 25 times earnings, the shares could hit $30 in the next year, so I would set that as a buy-under price. After 2014, the shares look increasingly attractive on long-term catalysts like China and the new laser technology.

Risks to Consider: Despite the significant long-term catalysts, the shares are still expensive at 37 times trailing earnings. The short-term support from “Gravity” sales and shorted stock may help to keep the price high, but investors should be ready to accept some pain before the long-term story kicks in.

Action to Take –> Three strong catalysts are working in favor of this large-screen theater operator and the outlook into next year and beyond looks increasingly strong. Start accumulating shares under $30, watching for near-term dips to add to a position.

P.S. Grab your seat at the Billionaires’ Roundtable… In this free webinar, trading expert Michael J. Carr shares the secrets of guru investors like Buffett, Soros, Icahn and more, plus how to identify which of their holdings are most likely to outperform, and two of his top-rated “guru picks” to buy now. Click here to watch the webinar now.