This BRIC Nation Could Be The ‘Mother Of All Game-Changers’

Andy Obermueller wasn’t this excited about an investment since Apple (Nasdaq: AAPL) plunked down $350 million in cash for one of his picks.

The company Apple bought was AuthenTec, a developer of fingerprint sensor technology. Ten months earlier, Andy reasoned that fingerprint security was just the sort of feature that Tier 1 customers are going to demand in their phones and other mobile devices to keep their credit card accounts and other sensitive information safe.#-ad_banner-#

That was in September 2011, when the Chief Strategist for Game-Changing Stocks went on to call AuthenTec “an immediate portfolio add for aggressive tech investors looking for strong upside on the cheap.”

The iPhone 5s has a fingerprint scanner. And Andy has another game-changing idea. A big one.

That’s what Andy told his readers in the most recent issue of Game-Changing Stocks.

The object of Andy’s excitement? It’s this: By 2030, the global middle class will more than double in size, to 4.9 billion people from 2 billion today.

That’s according to the Brookings Institution. Virtually all of that growth will come from emerging markets (in fact, the European and American middle classes are expected to fall to 22% of the total, from 50%).

At the same time, according to the Organization for Economic Cooperation and Development (OECD), spending by this new upwardly mobile economic class will rise in kind, to $56 trillion a year in 2030, from $21 trillion.

The most obvious impact from an injection of $35 trillion into the global economy will be rising prices brought about by an increase in demand for everything from washing machines to microwaves to video game systems. (Or, as Andy put it: “Only one thing happens when 2 billion people all of a sudden want a new Buick: Prices rise.”)

Let’s not lose sight of how huge this really is. This trend will encompass far more than just a couple billion new iceboxes. All of those units will have to be plugged in. They will all need to be stocked with food. Who of us wouldn’t stop whatever it is we are doing just to get the contract for 2 billion sets of plastic ice-cube trays, let alone microwaves, light bulbs or vacuum cleaners?

Bob: What are Brazil’s built-in advantages?

Andy: Brazil has the capacity to deliver raw materials, agricultural commodities and even energy on a global scale. The country is the world’s second-largest beef producer, with a commercial herd that exceeds 200 million animals, and the world’s largest coffee grower: Some 220,000 farms cover 10,000 square miles and produce 2.7 million tons per year. It also exports soybeans, oranges, ethanol, aluminum, iron ore and oil.

These resources will only become more important as the world’s population grows and must be fed and housed. Consider coffee. The world today consumes 22.4 billion pounds of coffee a year, enough for 894 billion cups of coffee. If a billion more people start having just one cup of coffee a day, that adds 365 billion cups a year, a 50% increase over today’s demand. What will happen if a few decide to have a second cup? If you thought a four-buck latte was expensive, you ain’t seen nothing yet.

How about aluminum? This is a vital construction material. Global demand rose 8% last year, and No. 1 producer Alcoa (NYSE: AA) expects demand to double by 2020. Brazilian bauxite reserves are the third-largest in the world, and the country produced 31 million tons of the input mineral last year.

While Brazil can certainly ramp up bauxite production, processing the raw material is another matter. New refineries require major investments in time and capital, and that investment could prove hard to attract as the margin moves from refining to bauxite production. So instead of 3 billion people sharing today’s output, even with marginal annual increases, now 4.9 billion people will. And about 2 billion of them are going to need a structure to live in, one that will require aluminum for various building materials — not to mention the aluminum required for soda cans and the foil in the kitchen.

All of this is very, very good news for Brazil. As commodity production rises, small farmers build wealth and spend money. This ancillary commerce ripples through the economy, and a rising tide lifts all boats.

Bob: What’s the outlook for the country?

Andy: For one, Brazil’s president is expected to run for re-election. Given the current state of public dissatisfaction, many see it as likely that she will launch meaningful governmental reforms, realigning the nation’s spending priorities with a strong emphasis on increasing infrastructure and rightsizing pensions. If so, she could have some hope of regaining voters’ (and the market’s) trust.

The economy, which posted 7.5% growth in 2010, the best in a quarter-century, has slowed — but it hasn’t stopped by any stretch of the imagination. Some of the forecasts I’ve seen call for growth of 2.5% for 2013, which exceeds what is expected and has been achieved in the United States of late.

This is, after all, the world’s No. 3 food exporter. And the country is going to be on front pages around the world when it hosts next year’s World Cup and the 2016 Summer Olympics. I expect the country’s markets to benefit from the increased attention.

Then there’s the oil business. Brazil is ramping up to be a major worldwide producer — and that’s an industry that is all too happy to build its own infrastructure. It is becoming a hotbed of technological innovation in the oil and gas space, notably with deepwater projects, which add potentially lucrative intellectual property as exports.

Bob: So what’s the best way right now to invest in a country that could be the mother of all game-changers?

Andy: The best way to capitalize on the inevitable future of Brazil’s rebound and growth is the Market Vectors Brazil Small-Cap ETF (NYSE: BRF). 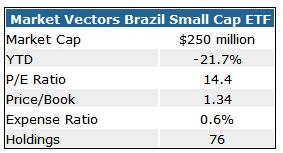 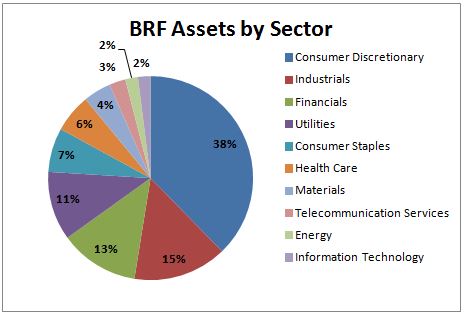 I like this ETF under $35 for investors willing to hold it for a minimum of three years. This investment has the potential to achieve strong results far in excess of the benchmark.

P.S. In addition to Brazil, Andy also predicts something big will happen in Russia — only this shocking event will happen before the end of the year. He predicts the Russians will end a 20-year nuclear treaty, causing a key commodity to spike in price. There’s one little-known company sitting on 65% of the worldwide supply of this commodity. Andy’s got all the details in a new report… click here for immediate access.

Bob Bogda is the Managing Editor of StreetAuthority. Bob began his journalism career covering the commodity markets in Chicago for The Wall Street Journal, and spent most of his career thereafter as an editor for the former Knight-Ridder Financial News and its offspring, BridgeNews, where he played a lead role in developing a real-time equities news service. More recently, Bob served as Editor-in-Chief at Business Financial Publishing, where he specialized in developing newsletters and websites covering small-cap stocks.